Jamia and the fight for India’s soul 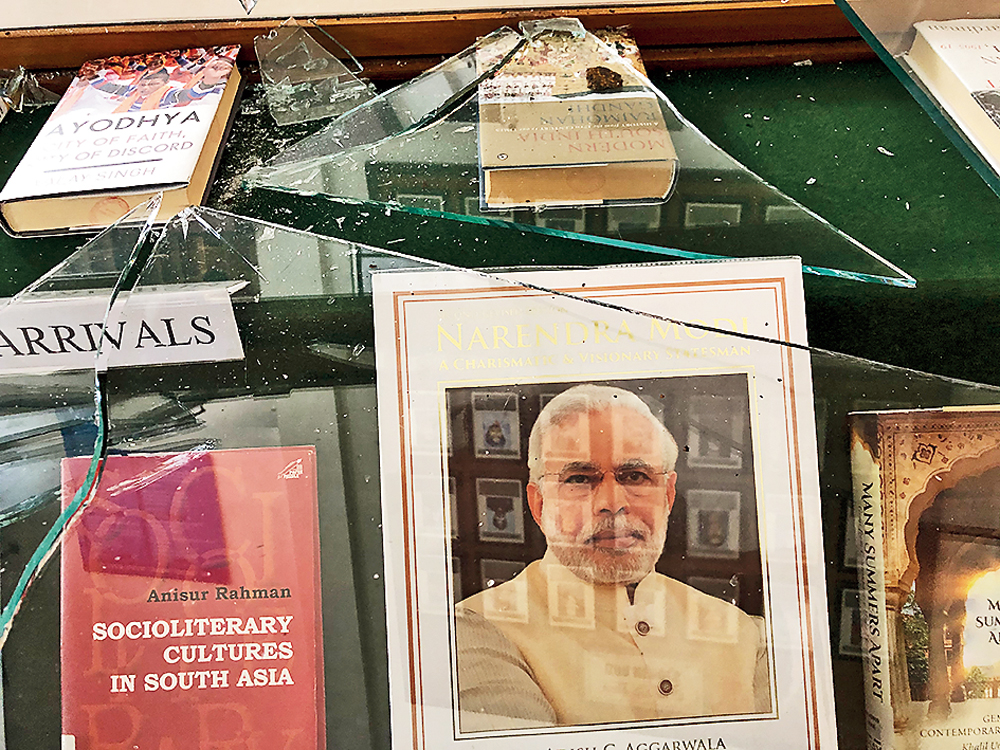 Jamia Millia Islamia, where I teach history, will be a hundred years old next year. It was born of the Non-Cooperation-Khilafat campaign, the first nationalist mass movement to challenge colonial rule. Throughout its long history, Jamia was an ideologically nationalist Muslim institution. It was close to Gandhi’s heart; he raised money for it in its precarious early years and visited it in the aftermath of Partition in September 1947 because he was concerned about the safety of its students and teachers.

Zakir Hussain, who framed Gandhi’s plan for basic national education, the Wardha Scheme, was one of Jamia’s longest serving vice-chancellors and arguably the republic’s most distinguished president. His mausoleum sits in the centre of Jamia’s campus, close to the university library named after him. Last Sunday, as students worked in the large reading room on its ground floor, the Delhi police, in its untiring attempt to keep Delhi’s citizens safe, stormed Jamia’s central library.

I walked through the library the next morning. The glazed french windows that open into its foyer had been smashed by policemen in their coordinated assault on a library’s reading room. The students who had been trapped inside testified that the police’s next move was to systematically destroy the CCTV cameras installed there and then to turn off the lights. Shawls, dupattas and backpacks lay abandoned on and in between overturned chairs and tables, mute witnesses to the violence that followed.

In a flanking move, the grille protecting a narrow window on one side of the reading room had been torn off and the glass broken, the better to lob a tear gas grenade into that closed space where students sat reading. It was still there the next morning, broken into three pieces. During the assault, some students took shelter on the roof of the building from where they tried to film the mayhem below as policemen surrounded the library and then attacked and evicted university students who had provoked them by studying indoors. In the neighbouring old library block, the Ibn Sina wing, named after the great medieval physician known to the West as Avicenna, two dozen policemen conducted an indoor lathi charge and beat the students there so severely that one of them, a law student from Samastipur, was blinded in one eye.

Afterwards, once the studying students had been properly subdued, they were evicted. They filed out on to the main road outside where policemen made them walk away from the campus with their hands in the air like a vanquished population after a siege. Except that this wasn’t some medieval citadel, it was a university in modern India, and these weren’t just students, they were rights-bearing citizens of a democratic republic.

I can’t think of the last time that the police liberated a library from... it’s not clear what. The vice-chancellor made it clear that she had not asked the police to intervene. The police spokesperson blandly claimed that they had followed ‘miscreants’ off the main road that bisects Jamia into the campus buildings to maintain order and suppress violence. But there was no violence on the main road abutting the university. The burnt bus that was flagged as a symbol of violent protest lay kilometres away. The police made it clear that no Jamia student had been arrested for either arson or violence.

And yet this same police force managed to trash a Central university’s library to the tune of Rs 2.5 crore according to the university authorities. Nothing was spared by these violent vandals, not even a glazed display case featuring a large book about the prime minister with his face on its cover. That too was wantonly smashed. And it wasn’t just the physical violence; what the students remembered even more vividly was the verbal abuse, the obscenities, the communal rage that animated those uniformed men.

There’s a video that’s gone viral of a knot of sketchily uniformed policemen pulling a male student out of a driveway where he was sheltering with his friends. Bravehearts that they are, the policemen knock him down on the road and then cane him with abandoned violence till his fellow students, all of them girls, stop them by using their bodies as shields. One of them is a student of mine, a quiet, studious girl, who was brave enough to meet the violence of swearing, insensate men with nothing but implacable courage. Gandhi would have been proud of Ayesha Renna. There is no bravery to swinging a lathi or throwing a stone but to do what those girls did is the hallmark of satyagraha, non-violent resistance that shames and de-legitimizes the violence of the State.

The difference in the way in which this government treats ‘Muslim’ and ‘non-Muslim’ protest, specifically the difference in the use of police violence, is instructive. The stand-off between Narendra Modi’s dispensation and its academic agents on the one hand and the bulk of the students and teachers of Jawaharlal Nehru University on the other has been in place for years, for so long that Kanhaiya Kumar now seems like a name from some Puranic battle. This has been a bitter struggle, bitterly fought, but never once has the Modi government attempted to resolve it through indiscriminate violence.

In Jamia, it took exactly five minutes on that fateful Friday, just over a week ago, for the Delhi Police to reach for its lathis and its tear gas grenades. Students and teachers had assembled for a march inside one of the university’s gates. The police, determined to snuff out the march before it started, had barricaded the main road right next to the gate. The moment students began to push and shove at the barricades — something that has happened in every demonstration since the dawn of republican protest — the police resorted to extreme violence. A student had his hand mangled (and later amputated) fending off a tear gas shell.

The lesson this difference teaches is stark. Like JNU, Jamia Millia Islamia is a Central university, but unlike JNU, it is, historically, a Muslim foundation, not entitled to the normal respect, consideration or leeway that a ‘mainstream’ university enjoys. The police violence visited on the Aligarh Muslim University and its students over the past few days has been, if anything, even more massive. This government’s calculation was that the police could make an example of a ‘Muslim’ university like Jamia without political consequences.

It was wrong. Since communalists are constitutionally incapable of empathy, they don’t allow for fellow feeling. The solidarity, in words and action, that Jamia and its students were shown by JNU and Delhi University, by lawyers and civil society activists, by ordinary citizens who had nothing to do with university life, was both moving and effective. The thousands who gathered at the police station at ITO to push the police to release students taken into custody, succeeded in their object.

More importantly, the furious condemnation that crackled like electricity through Indian universities, from rich private schools like Ashoka to professional institutes like IIM Ahmedabad and IIT Delhi, to state and Central universities all over the subcontinent, lit a fuse against the furtive bigotry of the Citizenship Amendment Act, 2019, that’s still burning. As India stirs in unison against this latest bid to sneak in a Hindu rashtra through a legislative back door, this government might yet regret the day it tried to bludgeon into submission a university birthed by a real nationalist movement.