Crackdown on protest in Delhi, police accused of brutality on campus 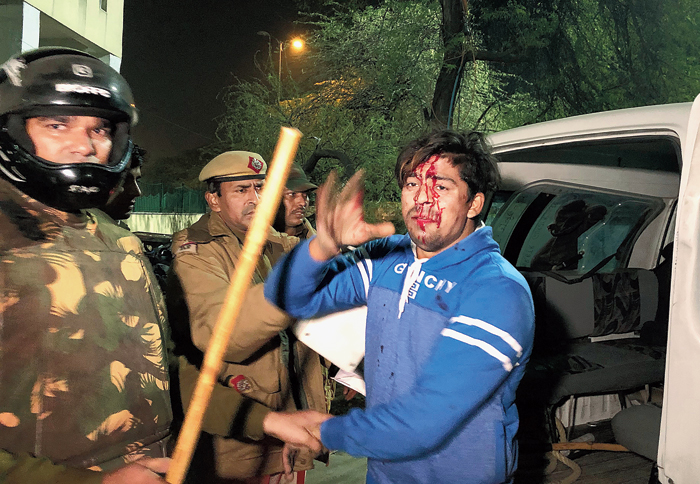 Policemen entered Jamia Millia Islamia without permission and went on the rampage on Sunday, thrashing students on the campus and beating a woman BBC reporter near a gate, students and university officials said.

Many students said they hid in the toilets but were pulled out and beaten during the raid, which took place after the police pushed back anti-Citizenship (Amendment) Act protesters — students and residents of the heavily Muslim neighbourhood — from the streets outside.

By nightfall, the issue had snowballed into a standoff outside the old headquarters of Delhi police in ITO, one of the busiest crossings in the capital, and its echoes were felt in Aligarh and Hyderabad.

At midnight, students, parents and politicians stood outside the Delhi police establishment, demanding the release of those detained earlier from the varsity and the evacuation of security forces from the campus.

Amid claims and counter-claims, the following accounts and information stood out:

Several injured students said they were too afraid to step out of their hostel to see a doctor. At least 50 students are detained in several police stations. The Delhi Minorities Commission has asked the Kalkaji police station to take all detainees to hospital.

A screenshot from a video clip sent by Ahmad Azeem, public relations officer, Jamia Millia Islamia, shows the tear-smoke-filled Zakir Husain Library, named after the former President who co-founded the institution, in the university on Sunday evening
Screenshot from Ahmad Azeem's video clip

Students said the library, canteen and the history and Urdu departments had been left strewn with shattered glass and damaged furniture. The police, who had barged in just after 6pm, were still inside at 11pm.

Some students claimed hearing shots on the campus though they could not specify whether these were bullets, tear smoke shells or stun grenades. The police denied “any firing” anywhere.

However, George P.A., director of the Holy Family Hospital near the campus, said: “There are two local persons, and two police officials admitted here for injuries in the clash today.… One man was admitted with a gunshot wound. The bullet has been removed.”

A video clip had earlier shown a man named Mohammed Tameem with what appeared a gunshot wound in his thigh. In the video, Tameem alleged he was hit during a protester-police clash at nearby Sarai Jullena.

It all started with an afternoon march of local youths and some students being stopped by the police near Mata Mandir Road around 4.30pm. Some of the protesters were accused of torching at least two buses, a car and several two-wheelers, vandalising two other buses and a fire tender and injuring several firemen and cops.

The marchers were caned and hit with tear smoke.

Deputy chief minister and AAP leader Manish Sisodia tweeted photos of a uniformed policeman and a man in ordinary clothes emptying canisters into a damaged bus, and a man in an orange shirt and a police helmet caning women along with policemen.

“It is clear from the photos that the BJP has done dirty politics and made the police light this fire,” Sisodia wrote.

After several clashes near Sarai Jullena, the police pushed the students back towards the university. The cops then surrounded the campus, barricaded the gates and entered after 6pm, firing tear smoke shells. Journalists were kept out.

“The police entered by force; no permission was given. Our staff and students are being beaten up and being forced to leave the campus,” Jamia chief proctor Waseem Ahmed Khan said around 7.35pm.

The police had first made for a place of worship, where some protesters had taken shelter, on the campus.

“Around 6.10pm, they (the police) threw a bomb (stun grenade) inside. There was an explosion and a lot of smoke. It burst near a student, who was left bleeding,” law student Saiful Islam, who said he was just outside the place of worship, told The Telegraph. “They fired tear gas inside, entered… and began beating up people, breaking glass panes and damaging stuff inside.”

As Saiful and some other students fled to the library of the varsity, the police followed. “They fired eight tear smoke shells from outside around 6.20pm, in such a way that they landed in the small garden at the centre of the circular building. We were all choking inside the library. At least four students fainted,” Saiful said.

“About 150 students were inside. Some ran to the terrace and some hid in the toilets. The police smashed the glass doors, entered and began beating up anyone they could find. Two students received gashes on their heads.”

Videos shared by the Jamia administration show students coughing in a smoke-filled library, with many hiding under furniture, as shots are heard outside. Some showed students lying bleeding in the library toilet.

Saiful said: “The police were looking for Kashmiris and dragged any Kashmiri-looking guy aside. I asked a cop where they were taking the Kashmiris; he hit me with a lathi.”

According to Saiful, the police locked at least 38 Kashmiris inside a room in the library.

Before the police raid, vice-chancellor Najma Akhtar had asked the students to stay on the campus for safety because of the turbulence on the streets outside.

Deputy commissioner of police (southeast) Chinmoy Biswal said: “While we were pushing back this violent mob, they were also going inside the university campus and throwing stones from inside. So we were trying to check from where these stones were being thrown…. There was no firing absolutely.”

He added: “It’s a peculiar university. You can see it’s not a unified campus. It is located on both sides of the road.”

Biswal said six policemen had been injured and blamed unnamed “groups” for the “pre-planned” violence, adding: “We have no issues with the university students.”

The students said all those they had seen beaten up inside were fellow students.

Chandan Kumar, a mass media student, had hid in the toilet. “Some 20 policemen and at least two CRPF men pulled me out and beat me badly with sticks and kicked me. I managed to stagger back to my hostel. I need to see a doctor but I can’t leave as they are beating up people everywhere,” he said around 7pm.

Mass communications student Farheen Fatima was running to her hostel when she saw a woman being beaten.

“Near Gate 8, the police beat up a woman BBC reporter and snatched her phone. Many of my friends are still hiding in the library. They have turned the lights off so the police think the building is empty,” she told this newspaper a little after 7.30pm.

ANI quoted journalist Bushra Sheikh as saying: “I came here for the BBC's coverage. They (the police) took away my phone and broke it. They hit me with a baton.”

She alleged that a policeman had pulled her hair. “When I asked them for my phone they hurled abuses at me. I didn’t come here for fun; I came here for coverage.”

Audio recordings of SOS messages that several students had sent to friends and acquaintances were circulating on WhatsApp.

Later, several students came to the Holy Family Hospital for treatment. At least 10 were admitted to the Al Shifa Hospital.

After 7.30pm, the CRPF began allowing the students to walk out of the campus in small groups, with their arms raised. Around the same time, some students saw 11 boys and 2 girls being taken away by the police in a bus while being beaten.

Late at night, several students, teachers and lawyers had gathered at Kalkaji police station where many Jamia students were being held, but the police were not allowing anyone to enter.

“Seven lawyers are here. The police have double-locked the gate. I saw a bus with more than 20 students go in. One of them said they were injured and had been detained from the library. He said, ‘Tell my parents’,” Delhi University law student Somaya Gupta said.

The police have not revealed how many students have been detained. Student leader Laraib Neyazi, who was updating reporters, sent a WhatsApp message at 10.41pm saying the police had detained him from Holy Family Hospital and taken him to New Friends Colony police station.

More than 250 students and several parents gathered outside the central Delhi police office at ITO and blocked the road, demanding the release of the detainees and the removal of security forces from the campus. These include Kirti Azad of the Congress, CPI general secretary D. Raja, CPM politburo member Brinda Karat and Bhim Army chief Chandrashekhar Azad.

A protest against the Jamia raid that several student groups had called in the ITO area from 9pm attracted a large number of students from across Delhi, ordinary people and senior politicians.

“Is it possible for someone to enter a university without the permission of the home minister?” CPM leader Brinda Karat said at the venue.

“Police have entered the campus and libraries. We are not supportive of violent protest but the police action is unacceptable. We demand that Jamia be freed of police presence and action be taken against those responsible.”

The Delhi government has ordered all schools near Jamia shut on Monday.

Several students’ organisations, including those affiliated to the Left parties, Samajwadi Party, RJD and the ruling Aam Aadmi Party, have called for a strike in Delhi on Monday.

The BJP accused Aam Aadmi Party MLA Amanatullah Khan of inciting the mobs at a meeting held in nearby Shaheen Bagh.

The students and residents of the neighbourhood had been protesting against the amended citizenship law since December 9.

The police had used tear smoke and caned protesters to prevent them marching to Jantar Mantar Road on Friday, and the university has advanced its winter vacation to Monday. Many students are yet to leave while some are determined to stay on and protest.