In protesting the attack on press freedom, Kashmiri newspapers show the way 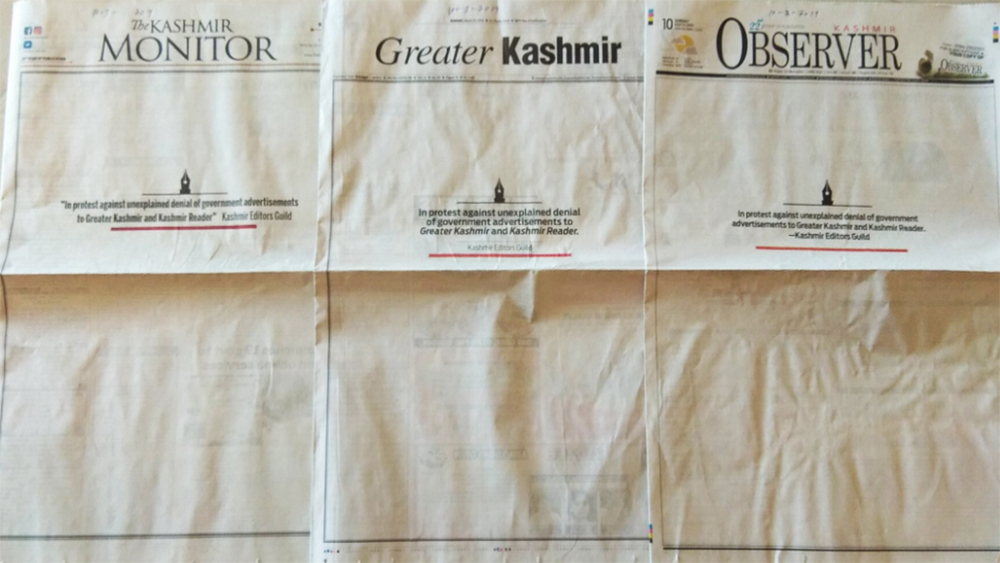 The Indian State was never quite in love with journalists, but press freedom has been rather obviously endangered since 2014. One of the most difficult places in the country for journalists and newspapers has been the state of Jammu and Kashmir, especially since the 1990s. The situation there has worsened, too, as in the rest of the country. Last Sunday, over 13 daily newspapers in Kashmir ran a blank front page carrying only a message from the Kashmir Editors Guild, saying that it was a protest against the “unexplained denial” of government advertisements to two English papers. This is not a simple matter. Kashmir has few private enterprises and corporations; hence newspapers are heavily dependent on government advertisements for revenue. Stopping these can be perceived as a deliberate attempt on the part of the government — Kashmir is now under president’s rule — to strangle the dailies in question. The governor’s office has neither bothered with a formal notification nor with explanations regarding its move, which the Kashmir Editors Guild reported to have been initiated last month.

It is certainly an irony of the situation that newspapers in Kashmir rely on the government for advertisement revenue to print pages that often criticize the government’s actions. Clearly the advantage is on the government’s side. What is remarkable is the courage and resilience of the journalists and editors: they manage. Just after the death of Burhan Wani in July 2016, the police raided the offices of all major English and Urdu dailies, seizing both the papers and the printing plates. That same October, one of the newspapers being targeted now was banned because it reported extensively on civilian deaths and injuries in the ongoing troubles. It was out of print for three months. But in the most recent incident, the Kashmir Editors Guild is playing a proactive role and has organized the coordinated protest. This has never happened before. By speaking up — in the ‘one voice’ that India’s prime minister so loves — against the government’s effort to destroy the media’s freedom through a protest intended to raise awareness among the public, Kashmir’s journalistic fraternity is not only asserting important democratic values but is also providing a model for protest. Covert attempts at selective silencing are best addressed by united resistance that strips the government’s move of cover.