Imperial history has lessons for the West and Afghanistan 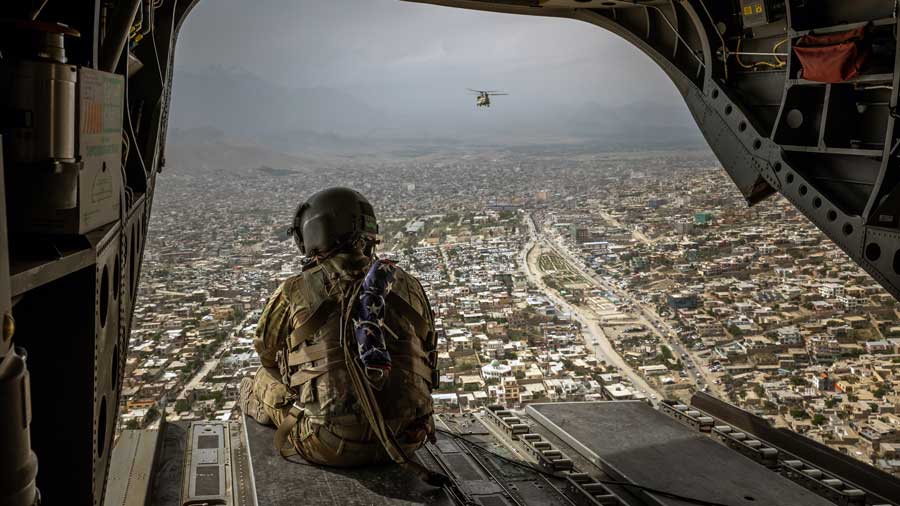 Last week, the United States of America and many countries in the North Atlantic Treaty Organization commemorated the 20th anniversary of the devastating terror attacks on the iconic World Trade Center towers in New York City. The scale of the outrage would have been even more crippling had a third hijacked aircraft, targeting either the Pentagon or the White House in Washington DC, not been brought down by the resistance of the passengers.

The commemorations were subdued because they took place in the backdrop of the restoration of Taliban rule in Afghanistan amid scenes of tragic chaos in Kabul airport. Ideally, the political leadership of the West had sought to convey to the world that terrorism does not pay. Instead, as swaggering Taliban soldiers gave triumphalist interviews to the Western media, what resonated was a very different message: the terrorists were having the last laugh.

The commentariat didn’t bother to conceal the scale of the debacle. An op-ed article in The Daily Telegraph (London) was biting in its indictment of the US: “Over the past decade, America has veered from one extreme to another; first [Donald] Trump, the pugilistic loose cannon — now the crumpled and pathetically stage-managed figure of [Joe] Biden. The nation seems not just rudderless but leaderless; a sickly patient with a dubious prognosis.”

Even the most ardent propagandist of radical Islamism could not have articulated the contempt and rage against the degenerate West any better.

The disorientation was particularly severe in Europe. In Britain, the country that once boasted the world’s largest empire not all that long ago, a farce played out over the refusal of its foreign secretary to cut short his holiday break to attend to the evacuation from Kabul. In 1940, a horrible military defeat was converted into a heroic rescue operation when thousands of small boats sailed across the Channel to rescue the remnants of the British Expeditionary Force from Dunkirk. The images from Kabul airport, alas, were far from inspirational. As a writer lamented in The Times (London): “We Europeans, about 600 million of us, are bigger and richer than the [US]. Nobody stopped us being strong. We just chose to be weak... We all relied on the US for leadership and protection. Now Washington... has put its own interests first and left us bruised and fuming... Afghanistan underlines Europe’s protracted adolescence.”

The strong words, unfortunately, were couched in a make-believe diagnosis. The problem that confronted Europe — and, indeed, the US — wasn’t infancy or adolescence. The real issue was one of will. The indictment of President Biden and, by implication, the former president, Trump, for negotiating the Doha Accord that accorded de-facto recognition to the Taliban was not centred on leaving a mission incomplete. Whether in the US, the United Kingdom or in Germany, the desire to dig in and complete the destruction of the Taliban had evaporated long ago. Just as the fall of Saigon in 1975 had been preceded by diminishing enthusiasm for a ‘forever war’, the mental defeat of the West in Afghanistan had happened even before President Obama’s final ‘surge’ in 2013. The issue that confronted both Trump and Biden was about responding to domestic public opinion and managing the retreat. The wave of outrage that was witnessed in the final week of August was never about leaving a mission incomplete. It was always about the management of the withdrawal. The Soviet Union had managed it better — the government of President Najibullah endured for nearly three years before it was overwhelmed by the mujahideen militia. The government of President Ashraf Ghani couldn’t even endure a fortnight.

The preliminary post-mortem has centred on the failure of the nation-building exercise in Afghanistan — euphemism for the establishment of a Western-style, rules-based, ostensibly modernist order. President Biden’s August 31 address to the nation where he bluntly stated that the US would not undertake “major military operations to remake other countries” has been interpreted to mean that this is precisely what was being attempted in Afghanistan.

Yet, it is interesting that prior to 9/11, the Republican establishment seemed deadly opposed to persisting with Ronald Reagan’s post-Berlin Wall democracy project. In an article in early 2000, Condoleezza Rice quoted George Bush as saying that he would avoid “open-ended deployments and unclear military missions”. The former president is quoted as saying, “I don’t think our troops ought to be used for what’s called nation-building. I think our troops ought to be used to fight and win wars.” Although the neo-conservatives had a strong influence on the George Bush administration, their vision of exporting democracy didn’t quite have all-round endorsement. One of the main criticisms of the misadventure in Iraq was that it was a diversion. The former UN secretary-general, Kofi Annan, for example, rued that “[h]uge resources were devoted to Iraq, which focussed away from nation-building in Afghanistan.”

Indeed, the charge that the US was trying to ‘remake’ Afghanistan in its own image stemmed from the American distaste for the warlords that constituted the erstwhile Northern Alliance. Additionally, the frenzied activity by Western ‘peace-keepers’ in Kabul to ensure that Abdullah Abdullah didn’t win the 2014 presidential election created complications. It fostered the impression — bolstered by the presence of many hundreds of aid workers and fresh-from-college political consultants in Kabul and elsewhere — that Americans had a stake in creating a compliant leadership.

For the Western powers, it was a no-win situation. At one level, they were pilloried for trying to establish political order in what had once been described as a ‘savage society’. At the same time, they were attacked for not being serious in their democratic evangelism. In his book, Descent into Chaos: The United States and the Failure of Nation Building in Pakistan, Afghanistan, and Central Asia, published in 2008, the well-informed Pakistani writer, Ahmed Rashid, lamented that “[t]he American failure to rebuild Afghanistan and Iraq or to move Pakistan and Central Asia toward reform and democracy made it almost impossible for Muslim moderates to support the West’s struggle against Islamic extremism or to bring about change in their own countries.”

It does not speak too highly of the social depth of moderate politics that it was excessively dependent on piggybacking on American initiatives to make a mark. With radical Islamism making a spectacular comeback as a reaction to impositions of democracy and modernity from above, it may be instructive to revisit the British Indian management of a turbulent region upon which the defence of India rested.

In 1919, when the raj first experimented with limited self-government for India, its extension to the North West Frontier Province was resolutely opposed by members of the Indian Political Service. The Chief Commissioner, George Roos-Keppel, a legendary civil servant with long experience in the Frontier, argued that “democratic reforms would be a poor cousin to the already robust jirga system where the Frontier’s leading men could express themselves in a more honest manner than they would in a British-style Assembly.”

But what if they strayed outside their zones to create trouble? On August 31, Julian Lewis, a former Chairman of the Commons Defence Committee in the UK, arrived at the grudging conclusion that “[a]ctive containment is the hard-headed solution to an otherwise intractable dilemma: whether to allow terrorists to attack us with impunity or to shoulder the unending burden of occupying every reckless rogue state which shelters and supports them.”

Lewis was expressing in a contemporary idiom what British administrators had formalized into policy by the 1880s: “when dealing with the savage tribes the best plan is, to fight as rarely as possible; and when you do fight, to hit them as hard as you can.”