Rathole mining harms not just the environment, but also the rights of labourers, most of whom are children 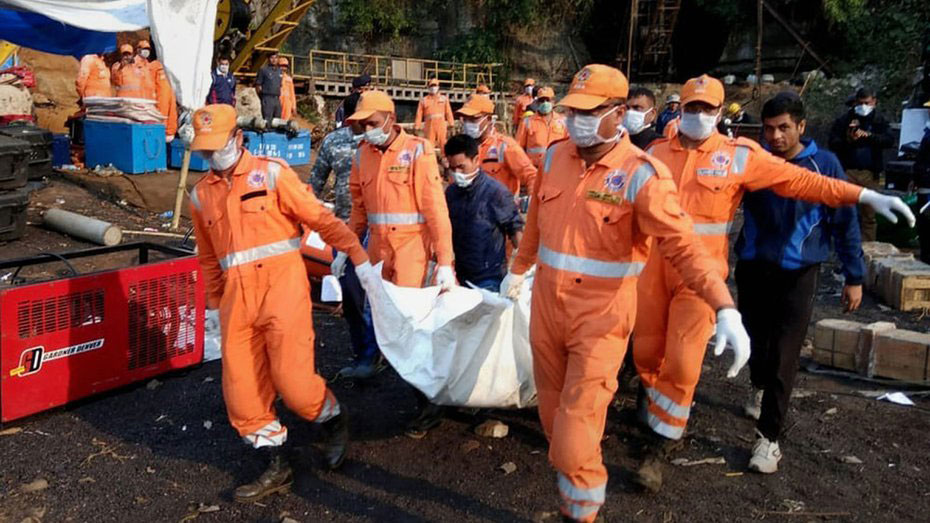 An unidentified body of a trapped miner is retrieved during a rescue operation in East Jaintia Hills on January 24, 2019. Rathole mining — an unscientific method which involves digging dangerously narrow tunnels — continues unabated even though it was banned in 2014
(PTI)
The Editorial Board   |   Published 09.07.19, 04:03 AM

It is in the order of things that life will slowly return to normal in the aftermath of a tragedy. The conditions under which such a return takes place, however, must be such that similar mishaps can be avoided in the future. This, perhaps, was part of the reasoning behind the Supreme Court’s decision to allow mining operations to continue in Meghalaya on land that is owned either privately or by communities. Mining can take place only if the required permissions are granted by the authorities concerned. The apex court’s direction comes months after a mining disaster in the East Jaintia Hills district, in which 15 miners were trapped in an illegal coal mine — also known as a rathole mine — after river water flooded it. The disaster occurred because rathole mining — an unscientific method which involves digging dangerously narrow, horizontal tunnels for workers to enter and extract coal — continued unabated even though the National Green Tribunal had banned coal mining in the state in 2014.

The court’s acknowledgement of the rights of the tribal people over the land and the minerals it yields is to be welcomed, as is its direction to the state government to pay the Rs 100-crore fine imposed by the NGT for failing to check illegal coal mining. The penalty amount is supposed to be used by the Central pollution control board for the restoration of the environment. This exercise, however, must be properly regulated. It must also be remembered that the ill-effects of rathole mining taint not just the environment, but also the rights of the labourers who work in the mines, most of whom are children. Given how narrow rathole mines are, only children can squeeze through them. This demand is fulfilled by agents working for mine owners, who even traffic minors from Nepal and Bangladesh into India’s northeastern region. The conditions under which these children live and work are inhuman. In 2013, coal mining was pegged at having generated up to 10 per cent of Meghalaya’s gross domestic product. Yet, the labourers work without insurance or safety equipment. The apex court emphasized the role to be played by the Centre and the Meghalaya government to ensure safe mining. Will the State, then, guarantee the protection of those who risk life and limb to work in the mines?

Down the pit, the price of the illicit