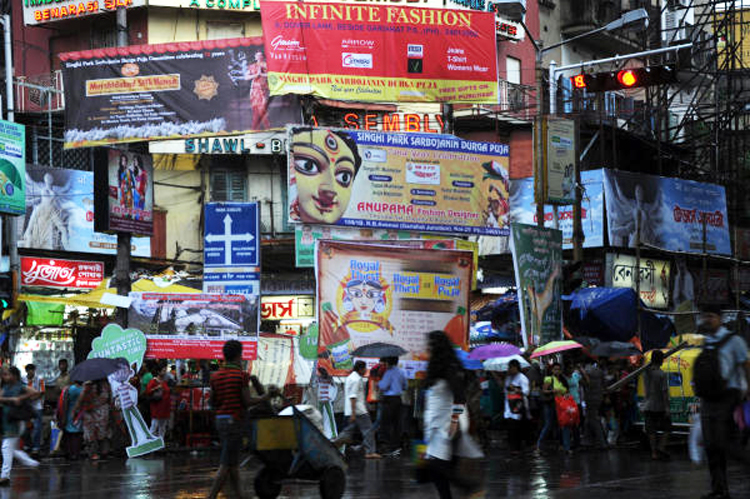 In Calcutta, during the Durga Puja season, the banners, flexes and billboards stuffed into every available space on, above and beside roads and pavements are blinding, dangerous, hideous and stifling.
(The Telegraph file picture)
The Editorial Board   |     |   Published 22.09.19, 08:10 PM

The death of a 23-year-old in Chennai recently exposed, through the tragedy, the nature of the typical Indian politician. A hoarding announcing a wedding in the family of a former All India Anna Dravida Munnetra Kazhagam councillor, with pictures of the present chief minister and deputy chief minister, as well as of the former chief minister, J. Jayalalithaa, put up illegally, fell on the young woman, knocked her off her scooter, and a water tanker ran over her. The Indian politician not only believes himself to be so important that his family events should be advertised in public spaces, but he also thinks that he is above the law. Besides, he is part of a political culture that, as the Madras High Court reportedly stated, places zero value on the lives of citizens. The court also mentioned bureaucratic apathy. The fact that the first information report upon the death of the young woman mentions the driver of the water tanker and avoids reference to the politician and his illegal banner is a measure of the depths which the law and its enforcers have plumbed to show compliance to ruling parties.

The high court’s rebuke minced no words. Reportedly, the court asked how many more litres of blood would paint the roads before the Tamil Nadu government banned unauthorized banners and billboards. The court had cautioned the government against cutouts and banners on the roads earlier too. In 2017, a young man died in Coimbatore when his bike hit an unauthorized wooden structure. But it is not just political parties that endanger lives with their banners and flexes. Calcutta, for example, is smothered by unauthorized commercial banners, often insecurely tied on, even at normal times; during the Durga Puja season, the banners, flexes and billboards stuffed into every available space on, above and beside roads and pavements are blinding, dangerous, hideous and stifling. The government’s apathy in this instance is bewildering. Its magnanimity towards lawbreakers puts citizens’ lives at risk. If nothing else, the state could use its own strictures against visual pollution to ban unauthorized billboards. If the Durga Puja is to be shown off as a unique expression of Bengal’s creativity, social consciousness and community spirit to tourists, it must be remembered that the ugliness and danger that banners and unauthorized hoardings represent are an immediate turn-off. It is urgent that Calcutta learn from Chennai’s tragedy.