Iconic relationships were at the heart of the National Movement 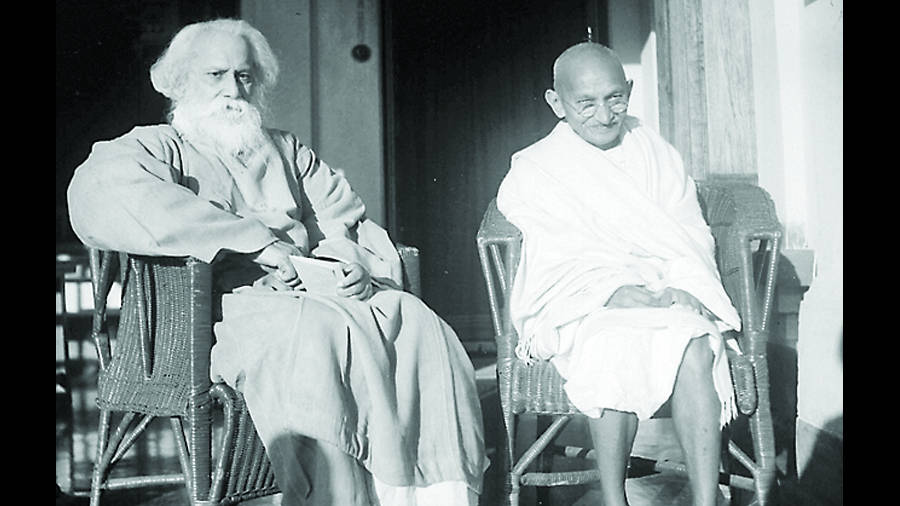 The Indian National Movement had some unique aspects, which were driven by its leaders. One way of understanding the movement is through individualism — examining its leaders as individuals. However, this paradigm fails to capture some features that were crucial to the making of the movement. I would like to present a relationship, which fell outside the paradigm of individualism — the one between Rabindranath Tagore and M.K. Gandhi. This relationship could be best characterized as that of a teacher and a student. Tagore, a poet par excellence, became popularly known as ‘Gurudev’ or teacher. Let us explore the context of this designation bestowed on the great poet of modern India.

The national movement saw a vacuum after the withdrawal of some of its prominent leaders such as Aurobindo Ghosh and Bal Gangadhar Tilak. While Ghosh withdrew from active politics after the Alipore bomb blast trials and took to spiritual practice, Tilak passed away not long after launching his rousing call for swaraj. This led to a gloomy and pessimistic time, a “dark period of confusion” and "frustration”, in the words of Kakasaheb Kalelkar. Therefore, it is important to remember that while Tagore chose Gandhi to lead the movement, he was also perhaps the only remaining choice to salvage what was looking like an almost lost cause.

It is Tagore who used the title, ‘Mahatma’, for Gandhi. ‘Mahatma’, Tagore clarified, refers to an emancipated soul no longer confined within the individual self. It is a self that includes everyone. But when Tagore called Gandhi ‘Mahatma’, he was not yet a liberated soul. So ‘Mahatma’ was not a description of Gandhi as he was at that point, but more a projection of his capacities and potentialities. Quickly realizing the wide gap between what he was and what he was expected to be to live up to this designation, Gandhi seems to have sought the help of Tagore. He called Tagore ‘Gurudev’, apparently, suggesting to him that if he wanted Gandhi to be a ‘Mahatma’, he should be Gandhi’s ‘Guru’. The making of the Mahatma would thus be a joint effort involving both Gandhi and Tagore. Therefore, the inherent nature of this teacher-student relationship was relation-centredness rather than individual-centredness. Relationships were at the heart of the national movement, an integral part of its nature and functioning. Convergence and divergence of views, contesting existing ideas and contributing new ones, deletions and additions, together formed the rhizome-like structure of the movement.

To train athletes to face tough competition, a sports coach exposes them to different adversaries. The training has to be more intense if the opponent is significantly more robust — as was the case with the indomitable British entrenched in India. Effective training sometimes demands that the teacher play the role of adversary. However, unlike in actual combat, this mock conflict or role-play has to be founded on mutual trust. If the teacher is hard on the student, it is only with the intention of training him/her.

I will use this format to understand some of the disagreements between Tagore and Gandhi. One of the significant public differences between them was regarding Gandhi’s call for non-cooperation. Tagore termed it as a doctrine of negation and despair. Gandhi replied to this by distinguishing between negative and positive liberation. While conceding the notion of mukti to be positive, he reminded his teacher about another equally important idea of liberation in Buddhism — namely, nirvana — which alludes to the negative side of truth. This second kind of liberation, according to Gandhi, had escaped the attention of Tagore. Instead of treating Gandhi’s response as a challenge to his teacher, I take it as a gesture of acknowledgement to his mentor.

The other difference between them was about Gandhi’s call to boycott foreign clothes. Tagore opposed this call too. Almost sounding like a politician, he asserted that burning foreign clothes is not a suitable form of protest in a country where millions did not have access to proper clothing. Gandhi responded rather poetically, saying, “In burning my foreign clothes I burn my shame.” Tagore also opposed spinning, which he felt was a move against technological advancement and would cause India to regress to primitive times. These differences, when seen outside the format of the teacher-student relationship, looked like acrimonious disputes between Tagore and Gandhi and created an uneasiness in Kalelkar, Jawaharlal Nehru and others. Nehru stated that “no two persons could probably differ so much” but, at the same time, they also had much in common.

It is for this reason I have used the format of teacher and student to understand these differences. The underlying bond between Tagore and Gandhi is evident in the following incident. When Gandhi’s health condition deteriorated during the controversial fast unto death at Poona, Tagore rushed all the way from Santiniketan to meet him. When Gandhi broke the fast, his secretary, Mahadev Desai, requested  Tagore to recite a poem from Gitanjali, which was close to Gandhi’s heart. Tagore later reported that in Gandhi’s presence, he forgot the meter he had originally composed the poem in, but he sang it nonetheless. The underlying strain of love towards his student legitimizes their differences as part of Gandhi’s ‘training’. This highlights the seminal, irreplaceable contribution of Gurudev to the national movement. We cannot obtain a clear picture of Gandhi as the Mahatma without considering the contribution of others such as Gurudev Tagore.

It is, therefore, necessary to set aside the liberal notion of enclosed individualism and study these leaders of the national movement within the format of relationships. Especially in the context of the Indian National Movement, most of the proper names of the leaders refer more to the relations with others rather than to the self. The dynamic nature of this relationship reveals the strength of the movement. So we will be able to understand the nature of the movement better through relations between individual leaders rather than as autonomous individuals, thus retrieving its unique nature.