Advertisement
Home / Opinion / I, me, myself: The Modi cult could threaten the BJP too

I, me, myself: The Modi cult could threaten the BJP too

Instead of pitting leader against leader, Opposition parties can use the opportunity to democratize their own organizations 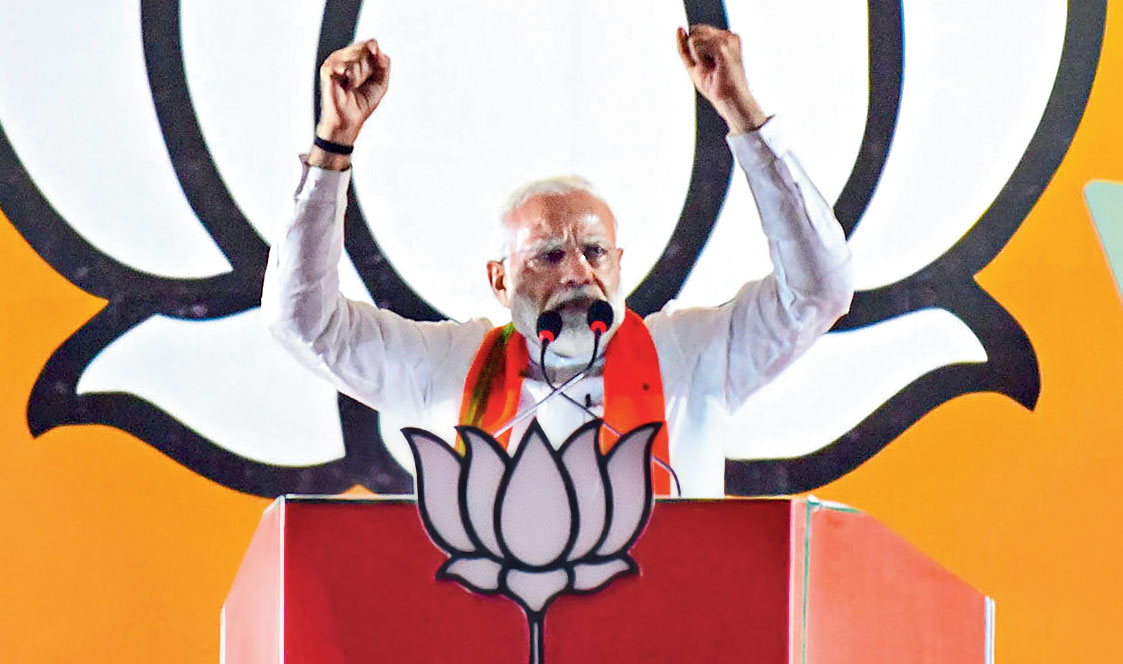 A joke doing the rounds this election season is that Narendra Modi set out to rid India of the Congress — or, in his oft-repeated words, ensure a “Congress-mukt Bharat.” He has managed to make it “BJP-mukt” instead.

This is an exaggeration, of course. The Bharatiya Janata Party has not disappeared. Neither has its parent and mentor, the Rashtriya Swayamsevak Sangh. Workers of the BJP and RSS organize Modi’s countless rallies across the country, and they play a central role in the actual mobilization of voters at the booth level on voting day.

But like all jokes, it also contains a degree of truth and highlights the most striking feature of the long-drawn-out general elections of 2019 — the overwhelming dominance of Narendra Modi.

Party leaders always play a big role during election campaigns, and a ruling party seeking another term invariably seeks votes in the name of its incumbent prime minister. In 2004, for instance, the BJP’s campaign slogan was “Abki baari, Atal Bihari” and in 2009, Manmohan Singh figured prominently in the Congress’s re-election bid even though Sonia Gandhi was the pre-eminent leader of the party.

But seldom before has an election in a parliamentary democracy become so completely centred around one personality. Narendra Modi’s campaign this time can be summed up as I, me and myself. In his speeches, there is no mention of any other BJP leader, no mention of the local candidate, no mention, even, of his party. Only the BJP symbol features — perhaps because the lotus has yet to be replaced by the face of Narendra Modi.

In the manner of all megalomaniacs, the prime minister always refers to himself in the third person and ends his speeches exhorting the gathering to press the “kamal (lotus)” button because “aapka ek ek vote seedha Modi ke khaate mein jaayega (your vote will go directly into the account of Modi)”. He does not seek votes for his party or the BJP candidate. It is always for Modi, and only Modi.

As the elections enter the last phase today, it is clear that Modi’s tactic has worked. To call this election “presidential” is an understatement. It has become a referendum on Narendra Modi. Barring the southern states (minus Karnataka), the electorate is divided between those who admire him and those who revile him. For the former, he is a saviour — the strong leader who has done India proud and kept the nation safe from its “enemies” outside and within. For the latter, he is a destroyer — of lives and livelihoods, of institutions and values; and denying him another term is essential to save India from further divisiveness and ruin.

Either way, the election is about him, and Modi revels in it. He is adept at sending different messages, playing different roles. He alternates between playing victim and aggressor — relishing every attack directed at him as a badge of honour and turning it into a weapon to viciously hit back — sparing neither the dead nor the living.

But in the process of building a personality cult that has assumed gargantuan proportions over the last five years, Modi has also steadily diminished his own party. Field reports filed by journalists from different parts of the country reflect a similar theme. Everywhere, vociferous voices — BJP supporters are traditionally more vocal in any case — insist that the candidate does not matter, the party does not matter, they are only voting for Modi. Often, they cannot tell the name of the BJP candidate in the fray. At other times, local residents will roundly criticize the incumbent BJP MP and say that he or she would not win a single vote on their own account. They are getting the vote “only in the name of Modi”.

No BJP candidate or local leader is complaining right now. They have no reason to. In fact, they can rest easy and not bother to campaign at all — knowing that their victory or defeat rests entirely on Narendra Modi. They are oblivious to the lessons of history — that the cult of the “great leader” invariably erodes the organizational strength and vibrancy of a political party in the parliamentary system of democracy.

A case in point is the Congress under Indira Gandhi. Many may find, with good reason, the comparison of Indira Gandhi with Narendra Modi odious. For all her flaws and mistakes, Mrs Gandhi maintained a measure of grace and dignity, never resorting to the kind of crude self-promotion that comes naturally to Modi.

And yet, it is common to find the name of Indira Gandhi crop up in any poll discussion about Modi. She is the one “strong leader” that Modi’s supporters — often openly, sometimes grudgingly — admire.

Although Mrs Gandhi was very different from Modi in terms of both personality and politics, she too exercised total control of her party for many years — to the Congress’s eventual detriment. After her hesitant beginnings, she struck out at the “Syndicate” comprising the conservative old guard leading to the famous party split in 1969. A series of radical measures culminating in the “Garibi Hatao” war cry helped her win a sweeping victory in 1971. That electoral win, followed by the spectacular defeat of Pakistan in the war later that year, made her invincible. She became the party — its sole leader and vote-catcher. Even after the Congress’s crushing defeat in 1977, Mrs Gandhi remained indispensable to the Congress. She brought back the party to victory in 1980; and in death she gifted the Congress an even bigger triumph. The party won over 400 seats in the 1984 elections that rode the “sympathy wave.”

But Mrs Gandhi’s complete domination over the political scene and her mass popularity slowly atrophied the Congress party. Under Jawaharlal Nehru, the Congress had a robust organization and strong chief ministers and regional leaders who had their own mass base. But after the 1969 split, it became strongly centralized. The “high command” made and unmade chief ministers at will. With Mrs Gandhi able to win elections for them, there was little incentive to build a vibrant grass-roots network or local leadership.

The election victories masked the growing weakness of the party. And this weakness eventually manifested in the Congress’s failure to keep its old coalition of castes and communities together; it was not able to reach out to new social forces emerging in the polity either. It eventually failed to meet the challenge of aggressive new parties to its enfeebled hegemony.

The Congress, perceived to be in a state of terminal decline, surprised everyone, including itself, when it won more seats than the overconfident BJP in 2004 and went on to head a coalition government that lasted 10 years. The Congress tally of 145 seats in 2004 and 206 in 2009 were nowhere close to the brute majorities it had won under Mrs Gandhi. But the slow recovery had come about after it won a string of assembly elections where local leaders played a crucial role. Reaching out to smaller parties to build a rainbow coalition was another element of the comeback strategy.

The Modi juggernaut crushed the Congress and other Opposition parties in 2014. But after assuming power, Modi ruthlessly cut to size leaders within his own party. That process has reached an apogee today. Whether he succeeds or fails, by making this election all about himself, Narendra Modi has weakened the BJP and rendered its candidates redundant.

Instead of falling into the “presidential” trap that pits leader against leader, Opposition parties can use this opportunity to revitalize and democratize their own organizations — which is the only long-term check on the deleterious cult of personality that has repeatedly hobbled India’s tryst with democracy.

Kejriwal pulls off the impossible: uniting the Congress party