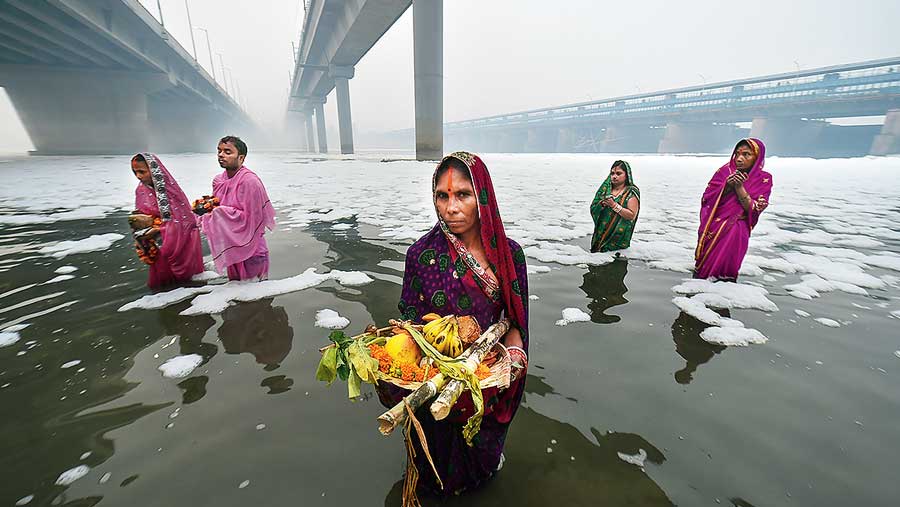 India emerged honourably from the Glasgow climate summit. We incurred the wrath of the West by disallowing the dramatic abolition of coal. Given the compulsions of our power supply, we could hardly undertake more than ‘phasing down’, rather than ‘phasing out’, its use. Our commitment to green energy was substantial: 500 GW, or 50% of our energy needs, by 2030. (It currently commands nearly 40% of the total installed capacity.) This is a viable
goal, even if the demand rises markedly.

Can India, then, hope for an environmentally secure future? The answer, alas, is more complicated. Clean energy takes its own environmental toll. Fossil fuel for transport poses a separate set of challenges. And most basically, fossil fuels are only one among many threats to the environment.

These factors are not special to India. The whole world is culpable, smug post-industrial nations above all. The fact remains that environmental degradation will devastate our people sooner and more horrendously than theirs. We cannot await their improbable change of heart. In an unjust world, we must act fast to survive.

The most publicized discourse at climate summits concerns technological mitigation. It moots new sources of energy and engineering solutions for new sustainable strategies of profit so that the global-industrial order might reign indefinitely. Statistics belie this glowing prospect. As Amitav Ghosh has recently stressed in The Nutmeg’s Curse, our planet lacks the resources to support even a decent fraction of humankind at the comfort level of the urbanized West.

It is a question of brute logic. Human intervention has depleted and destabilized nature. Tinkering with the debris will not restore the balance. We might fool ourselves by settling for the least we need to do; nature is not a spoilt child to be soothed with lollipops. We should rather ask what is the most we can do, and how soon, to prevent total implosion of our technological civilization, whose blessings we rightly value. But we can only preserve it by turning the technology to radically different ends through transformative social and economic change. Disruptive innovation is sometimes the only way to save a business. This business is about ensuring the survival of India and humanity.

The onus lies equally with the Union and the states. The two can be equally insouciant; much more so the elusive, omnipotent industrial and mining lobbies in their many avatars.

With almost total impunity, mining is ravaging the environment in state after state: most dramatically in the tribal belt, but as far afield as Goa and Karnataka. Sand mining is eating away the countryside everywhere. Under cover of the pandemic, last year saw a determined effort to dilute the environmental impact assessment for new industries. Protests were met by suppressive action, including surveillance of websites and ‘inadvertent’ application of anti-terror laws.

The proposed amendments to the Forest Conservation Act have alarmed environmentalists no less than forest communities. Global Forest Watch reports 3.4% loss of primary forests and 5% of total tree cover in India in the last twenty years, continuing even through the pandemic. Government reports are more positive. Might they owe something to the official desire to redefine what qualifies as forests?

We are hearing much about Punjab’s deteriorating soil. It required a political ploy against the farmers’ movement to highlight the crucial issue of crop diversification. At the other end of India, mounting storms and floods have left parts of the Sundarbans too saline to farm. There is already a stream of climate migrants. Their planned rehabilitation today might prevent an unmanageable tide of climate refugees tomorrow.

Climate change has played havoc with storms and rainfall patterns. That is half the story behind the unseasonal floods in southern cities. The other half is that drainage outfalls are choked: the lakes in Bangalore, the Buckingham Canal and Adyar and Cooum rivers in Chennai. India’s cityscape is an evolving allegory of environmental degradation. Bangalore’s surviving lakes seethe with toxic waste that, incredibly, sets the water on fire. No less incredibly, toxins are choking a river as mighty as the Yamuna. The holy Ganga is among the world’s most polluted rivers. The piously named Namami Gange scheme has not saved it from untreated effluents.

Bengal contributes amply to the effort. The East Calcutta Wetlands, into which the entire city drains, have been consummately hijacked: in one mouza, water coverage dropped from 88% in 2002 to 19% in 2016. An influential minister branded those fighting this ravage as “enemies of Bengal”. Bringing to life the Bengali idiom for an impossible scam, promoters are stealing ponds across Calcutta, playing havoc with outfall patterns. Entire rivers are virtually defunct: the Churni, the Sonai and the Bidyadhari, to take three widely dispersed examples.

Some bucks must stop with the urban elite. The environment would be markedly more robust if privileged citizens used public transport, did not buy property on illegally reclaimed soil, and shunned tourist resorts invading eco-protected zones. Environmental laws are being redrafted or simply flouted on an epic scale to benefit construction and tourism no less than mining and industry. Promises of local employment and prosperity usually prove hollow: the indigenous population is displaced and impoverished. There is pervasive hypocrisy in touting environmental measures, like clean energy, consistent with big capital while consistently subverting them where that best serves the latter’s turn.

Yet we cannot avoid such anomalies. As I write, there is resistance in Chhattisgarh to coal mining in the Hasdeo Aranya. Campaigners in Bengal’s Deocha-Pachami coal block seem undecided, for reasons that prompt speculation. There is no easy resolution. We cannot oppose coal mining while relying massively, and for the moment unavoidably, on coal-fired energy.

Also as I write, grassroot environment groups from across Bengal have gathered, almost unnoticed, to discuss such thorny issues from a ‘green platform’ (Sabuj Mancha). The future of the planet lies with a multitude of such forums and movements, no less than with global arbiters in Kyoto, Paris or Glasgow. No citizen need be excluded. There lies our strength, if only we knew it.