Advertisement
Home / Opinion / How should we react to linguistic relics of a past that was never ours?

Racism is built into the English language. Can Asians who are deeply involved with it escape the perils of its embrace? 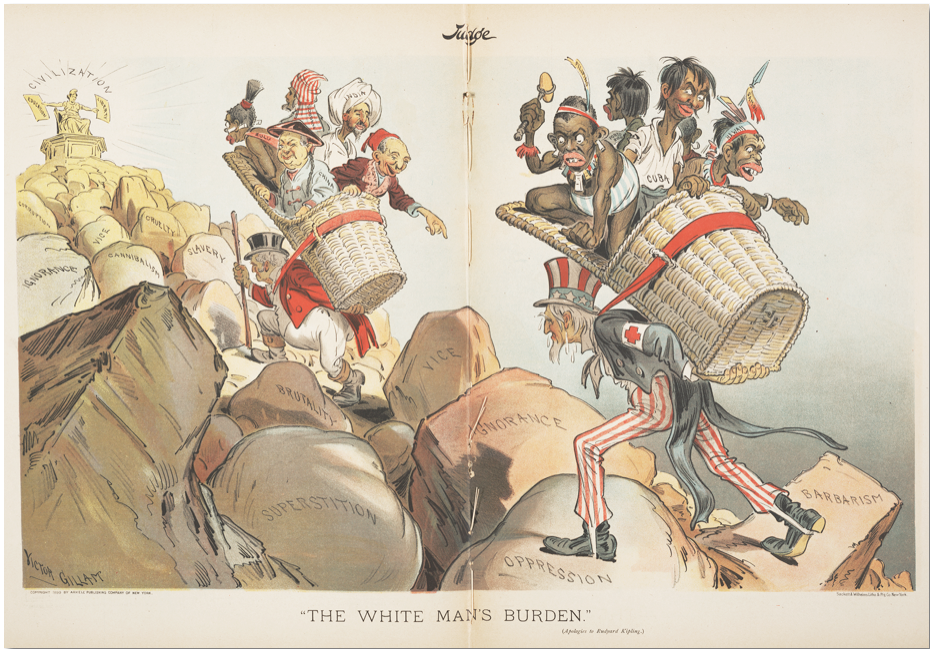 An 1899 cartoon showing John Bull and Uncle Sam, symbolising Britain and the United States of America, bearing "The White Man's Burden" (borrowed from the title of a poem by Rudyard Kipling) by taking Asians and Africans to civilisation
'Judge' magazine
Sunanda K. Datta-Ray   |   Published 05.10.18, 06:22 PM

The furore in London over the phrase “whiter than white” takes me back more than 60 years to an incident in the lodgings I shared with five or six English boys. We were in our teens, I being the youngest, and, living as a single family, inclined to be high-spirited and argumentative. In one of those outbursts of exuberance one evening, one boy accused another of “not playing the white man”. As my ears pricked up, the momentary silence was quickly filled with another boy’s lusty, “You’re not being like Harry at all!”

Harry White was one of us, but absent that day. An utterly simple youth, he would have been baffled at being dragged into the argument. But the boy who intervened saw the opening his surname fortuitously provided and grabbed it. Realizing the embarrassment that the “white man” colloquialism might cause in racially mixed company, he quickly turned white into White. The felicity suggested an instinctive diplomat. But in the 1950s Britain’s establishment did not consider working class lads from the industrial North attending provincial universities on local government grants suitable for membership of Her Majesty’s diplomatic service.

Recently, controversy erupted when a London Metropolitan police detective superintendent urged colleagues to be “whiter than white” in discharging their duties. Following complaints of racism, the officer was placed on restricted duties while his alleged “gross misconduct” is investigated. The inquiry could take up to 12 months and result in his sacking. The Plain English Campaign defended him saying, “As the phrase means ‘morally beyond reproach’ and is used in that context with that intent, it seems fairly ludicrous that the officer in question is being investigated at all, let alone for ‘gross misconduct’.” But underlying that meaning is the assumption that a white man is someone of “honourable character” and “good breeding” as the Concise Oxford Dictionary puts it. That doesn’t mean the boys I lived with thought all whites were similarly exemplary. Nor that those virtues were denied to the black, brown and yellow races. But everything they had heard and read had inculcated in them the conviction that a white was “a thoroughly straightforward and honourable man who could never do a dirty action”.

Kipling’s “white man’s burden” illustrated the same assumption. So does the American-origin phrase “nigger in the woodpile” (or fence) meaning “some fact of considerable importance that is not disclosed — something suspicious or wrong”. At least two British Conservative Party politicians have suffered public censure in recent times for using it. Agatha Christie had to change a chapter title of her 1937 Hercule Poirot novel Dumb Witness which was published in the United States of America as Poirot Loses a Client. The offending chapter heading was replaced with “A Cuckoo in the Nest”. One of the American characters in Somerset Maugham’s The Razor’s Edge also uses the phrase but I haven’t heard of any screams of outrage. That is probably because for all his popularity, Maugham didn’t have Christie’s mass readership.

It’s a moot point how readers outside the Anglo-Saxon world should react to these relics of a past that was never ours. I once tried to persuade the late Gopal Haldar, the undivided Communist Party of India’s leading littérateur and an analyst of contemporary social reality, to write an article on whether his mastery of the English language had imposed any of its value systems on his own thinking. Haldar claimed English was just another language he had studied as a matter of course and implied that it had been of no emotive or cultural significance for him. I think he even inserted a phrase in one of the articles he did write for my paper saying in effect that a language was only a language and he couldn’t understand why anyone should read more into it.

This surprised me at the time. Later I felt vindicated when I read that Zhou Enlai, who went to Japan when he was nineteen to train as a teacher, commented on the “arrogance” of his hosts and wrote, “Language is also a means of colonization. I realise this in Japan.” I understood then that while Zhou had not only had to learn Japanese but also had to immerse himself in Japanese society to the extent that language and life overlapped, Haldar’s entire existence was in Bengali. English had never been more than an impersonal tool of occasional formal business communication for him. It didn’t impinge on his sensibilities. But can Asians who are more intimately involved with the language hope to escape the perils of its embrace?

One thinks of the 19th century Anglicized Bengalis whose women wore dresses and who spoke of “going Home” or “coming out” to India. Even the word “posh” (“port outward, starboard home”) identifies a non-Indian speaker. But did Bhagat Singh Thind, the Sikh who petitioned, albeit unsuccessfully, for US citizenship on the grounds that he was “a descendant of the Aryans of India, belonging to the Caucasian race (and, therefore) white...” really see himself as white? D.L. Roy’s mockery notwithstanding, would any of them unconsciously use white in the sense those English students I lived with did?

The English language offers other examples of prejudice. A “street arab” (note the dismissive small “a”) used to be London’s synonym for a street urchin. A “bint” — corruption of the perfectly respectable Arabic “bintun” for a girl — was slang for a pickup or easy lay. These expressions of racial superiority have long been in disuse. Even when they were in vogue, you would never hear them on the lips of any self-respecting West Asian. That’s the difference with India. I cringe every time — and it’s becoming more and more frequent — I see our leading English-language newspapers apply the word “babu” to a bureaucrat, usually in a derogatory sense. Would-be smart but semi-literate India has swallowed hook, line and sinker the contemptuous colonial interpretation of a term of honour in all Indian languages.

It’s not that Indians are lacking in sensitivity. But the sensitivity is often misplaced. A Bengali reader once took a colleague to task for calling Americans of African descent blacks. He obviously abhorred any mention of dark skins as deeply insulting. Nor had he had heard of the “Black is Beautiful” revolution in the US, and how blacks had turned pejorative white terminology on its head to bask proudly in what were once considered insults. Each society has its own notions of political correctness. The official West Bengal censor during the Emergency tut-tutted his bhadralok disapproval of my calling a Bihar politician a “Chamar leader”. I had a job explaining to that small-time official in Writers’ Buildings that I was only repeating the boast of a legislator who was convinced he was in a position to vanquish Jagjivan Ram on the national stage.

India’s “neech jaat” controversy was nothing compared to British police touchiness. On another occasion, John Denham, the police minister, was rebuked for telling Police Federation members that it was time to “get down to the nitty gritty” of training. Nitty gritty is prohibited because at one time it described slaves in the lowest reaches of slave ships. The term “egg-and-spoon” (as in a race) is forbidden because of the Cockney rhyme of spoon with “coon” which is derogatory slang for black.

Black and white can have different meanings. There’s the old tale of the death in Africa of the European missionary who had cared devotedly for his flock for many decades. “His skin may have been white,” declared the black minister officiating at the missionary’s funeral. “But his heart was as black as ours.” Politically correct Westerners in these days of self-conscious rectitude would disapprove. But Asians and Africans could agree that black is indeed beautiful if only we stopped thinking like Bhagat Singh Thind.