DELHI DIARIES: But why is Bihar DGP not taking journalists calls? 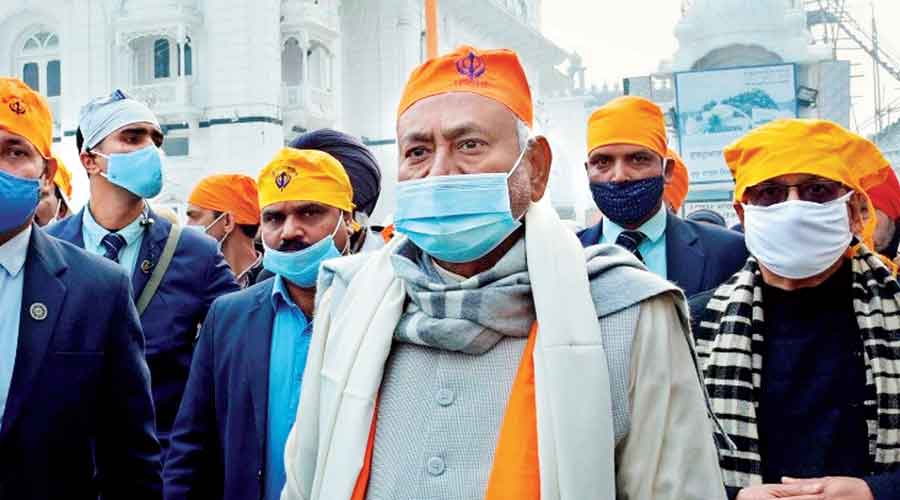 It was the 354th birth anniversary of Guru Gobind Singh, the 10th and last guru of the Sikhs, and the chief minister of Bihar, Nitish Kumar, went to offer prayers at his birthplace, Takht Sri Harmandir Sahib, popularly known as Patna Sahib. The pilgrims present there from different parts of the country and abroad were happy to see him as a devotee, and they expressed it with chants of “Jo bole so nihal...” Kumar, on his part, did his best to abide by the customs and partook of food at the langar (community dining) at the gurudwara.

After he left, several senior Sikh leaders from Delhi and Punjab asserted that Bihar’s chief minister has become the cynosure of the eyes of all Sikh people across the globe by the way he fabulously organized the 350th birth anniversary of the guru in 2017. One of the religious leaders went a step further to say that the event had made Kumar more popular than the prime minister, Narendra Modi, among Sikhs. “If he becomes the prime-ministerial candidate and contests the Lok Sabha elections from anywhere in Punjab, he will win hands down. He must give it a thought,” the Sikh leader confided, as others nodded in unison. Of course, good deeds last long.

The steady rise of the chief minister of Uttar Pradesh, Yogi Adityanath, seems to have generated anxiety in a section of the current regime. They fear that the saffron-robed monk could emerge as the top choice to succeed Narendra Modi. In the Hindutva brigade, he is already a favourite. In election-bound states, Adityanath is the most sought-after campaigner, drawing large crowds. Recently, he even executed a law against inter-religious marriages, known popularly as the ‘love jihad’ law, that many other states ruled by the Bharatiya Janata Party are implementing. But the confirmation by the Central Bureau of Investigation of the gang rape and murder of the Hathras victim has come as a big setback for the government, as the state police had claimed that no rape had taken place. In the power corridors of Delhi, the CBI’s probe report has been seen as a politically-loaded move to cut Adityanath to size. Now it is no secret under whose control the premier investigating agency functions.

No room for change

How difficult is it to reform the Bihar police? The chief minister, Nitish Kumar, has learnt it the hard way. With the state slipping down the dark alleys of crime and the police failing miserably in checking it, mediapersons reportedly found the men in khaki, including the director general of police, SK Singhal, avoiding them by not even taking their phone calls. They complained about it to Kumar, who promptly spoke to Singhal and asked him to respond to their calls. Soon, the government also issued a notification giving out the landline and mobile numbers on which the DGP could be contacted.

But what happened next came as a shock. Those who called the mobile number reportedly found out that a stenographer was receiving the calls and he would neither give the message to the police chief nor would there be any call back. Some of the callers gave the stenographer a piece of their mind about how the DGP was a public servant and not a feudal lord in some medieval state. A few people also apprised the chief minister of the situation, but nothing changed. A top politician pointed out, if the chief minister cannot reform the DGP, how could he be expected to improve the law-and-order situation in the state? Meanwhile, Singhal got confirmed for a two-year stint as the DGP after receiving the nod from the Union Public Service Commission. But the state continues to earn infamy over increasing crime and brazen criminals.

The chief minister of Chhattisgarh, Bhupesh Baghel, did make an impression during his first visit to Assam as one of the senior observers tasked by the Congress leadership to manage and coordinate the state assembly elections to be held in April-May. The arrival of the man who had delivered Chhattisgarh to the Congress in 2018 saw the announcement of the much-awaited grand alliance of six parties, including the All India United Democratic Front, against the ruling BJP. But party insiders were most impressed by his frontal attack on the ruling dispensation, something they felt was necessary for the challenging electoral battle ahead. In his short but pointed speeches, one of which was made during the announcement of the grand alliance, he tried to turn the tables on the BJP’s ‘what-did-the-Congress-do-in-60-years’ narrative by reportedly asserting that whatever the BJP-led Centre is ‘selling’ today, from airports to railway stations, was built during the Congress regime, not by the relatives of the BJP leaders.

Baghel also marketed the Chhattisgarh model of development, claiming that it was better than the Gujarat model promoted by the BJP. Baghel has made a good start, senior Congressmen said, but impressing the electorate, keeping the faction-ridden state unit together and coming up with a solid narrative to counter the BJP will surely be a different ball game.

Dravidian politics has always had an impact in Karnataka and not just because of shared borders, culture and cuisine. Dravidian political parties have often tested waters in Karnataka which has a significant Tamil-speaking population. Now that VK Sasikala, a close associate of former chief minister, J Jayalalithaa, is ready to walk out of Bangalore jail after her four-year prison term in a disproportionate assets case, even commoners in the BJP-ruled Karnataka are closely watching her move. While she cannot contest in elections for six years, she would certainly play a vital role with her breakaway Amma Makkal Munnetra Kazhagam. With Rajinikanth dropping his political entry, the BJP is reportedly trying to forge an alliance with her party to lure her supporters in Karnataka.

The chief minister of Karnataka, BS Yediyurappa, and the Union home minister, Amit Shah, were found to admire one another during the latter’s recent visit to the state. The Lingayat strongman likened Shah to no less a person than Vallabhbhai Patel. Shah returned the compliment by affirming Yediyurappa’s leadership. Patting each other’s backs has had an immediate effect in silencing those trying to replace the septuagenarian with a Hindutva hard-liner.