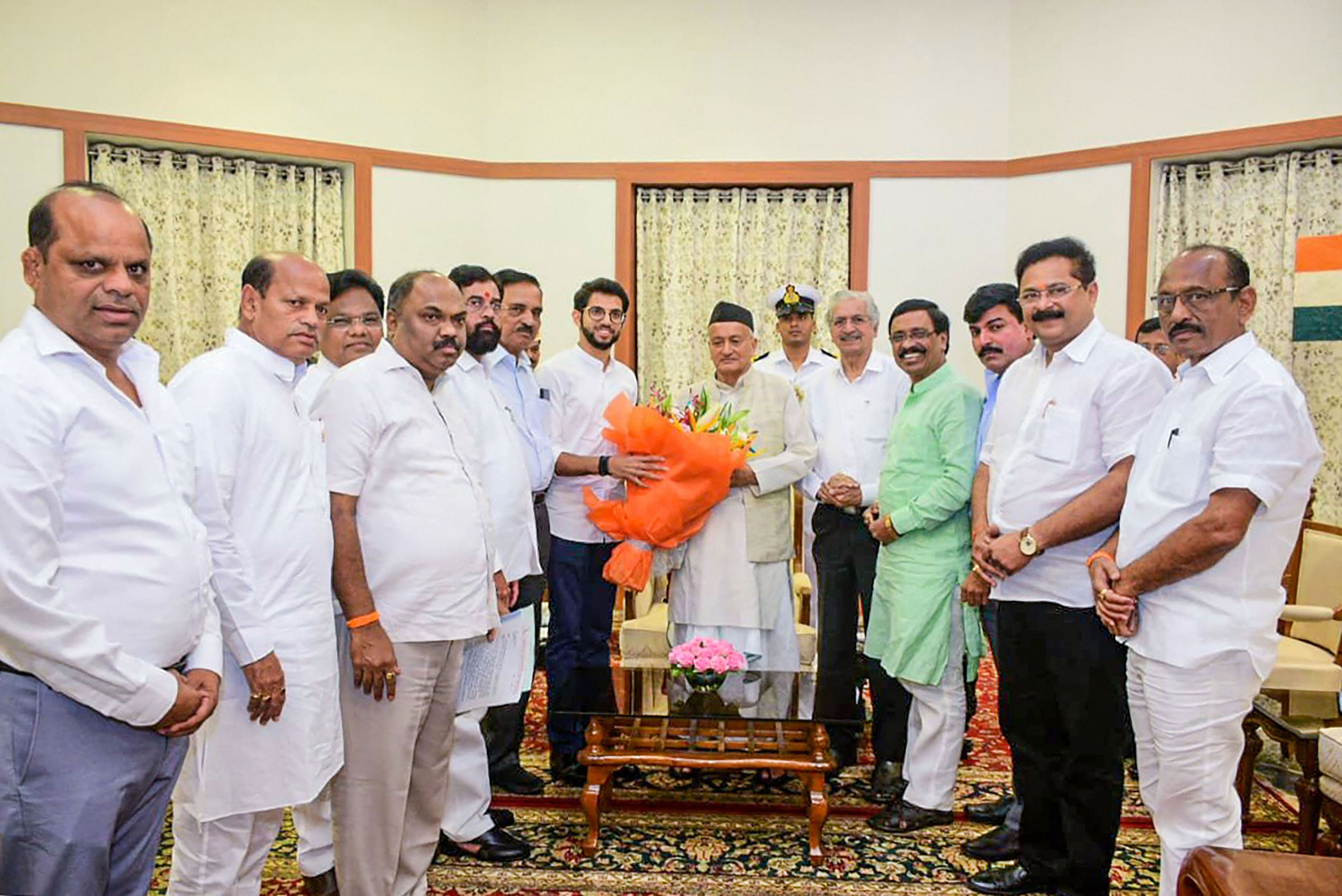 Shiv Sena leaders Aaditya Thackeray, Eknath Shinde and others meet Maharashtra governor Bhagat Singh Koshyari at Raj Bhavan in Mumbai on November 11, 2019. The Shiv Sena has been critical of Koshyari for his refusal to grant the party 48 hours to gather the numbers in its kitty.
PTI photo
The Editorial Board   |   Published 13.11.19, 07:45 PM

There is something bizarre in the state of Maharashtra. Developments on the political front — none of them salubrious for the health of a democratic polity — are indicative of the absurd state of affairs. Several days after the declaration of the results of the assembly elections, the people of Maharashtra have been gifted with not a government but president’s rule after none of the primary contestants — the Bharatiya Janata Party, Shiv Sena, Nationalist Congress Party and the Congress — could come up with the numbers necessary for government formation in spite of hectic parleys. The fluid situation can be attributed to the unravelling of the alliance between the BJP and the Shiv Sena over, among other things, their contesting claims on chief ministership. Honouring the public mandate, evidently, does not rank too high on the priority list of political parties which — note the irony — claim to represent the interests of the people.

The conduct of the governor, Bhagat Singh Koshyari, has, like that of the politicians, been disappointing. Admittedly, Mr Koshyari has refrained from emulating the brazen acts of some of his peers who, the Opposition alleges, are doing the bidding of the BJP-led government at the Centre in a number of states. But there were notable inconsistencies in Maharashtra as well. For instance, president’s rule was imposed well before the cut-off time that had been set for the NCP to cobble up support. Even the Shiv Sena has been critical of Mr Koshyari for his refusal to grant the party another 48 hours to gather the numbers in its kitty. The party has petitioned the Supreme Court, challenging the governor’s refusal to grant more time. In Karnataka, the BJP, it is being argued, was provided sufficient time — two weeks according to some estimates — by the governor there to reach the magic mark. These worrying twists and turns reveal the urgent need to clearly identify and then honour constitutional stipulations, especially when the situation is rather delicate. A specific period of time must be set aside for political parties to prove their majority. Governors must adhere to it strictly so that no political party can be given the advantage of additional time. This window period should not be too long either. A prolonged waiting period often makes it easier for ‘poachers’ to annihilate the ethics of political conduct.

Overlooked in small state, in hot seat in big