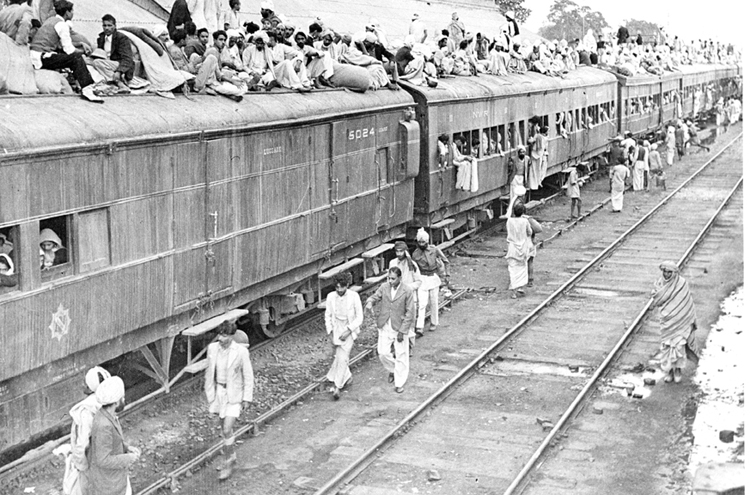 A refugee special train at Ambala Station during Partition. Seventy-two years ago, India was a land at war with itself, as a wave of intense communal rioting had both preceded and followed Independence and Partition
Courtesy: Photo Division, Government of India, via Wikipedia
Ramachandra Guha   |   Published 06.12.19, 08:11 PM

In December 1947, the annual Indian History Congress was held in Bombay. The president-elect that year was Professor Mohammad Habib of the Aligarh Muslim University, a historian of early medieval India, known especially for his studies of the Delhi Sultanate. From the late 1930s, many students and faculty at AMU had been active supporters of M.A. Jinnah and his Pakistan movement. Mohammad Habib was not one of them. He was resolutely committed to an inclusive Indian nationalism, whereby citizenship was to be defined by shared values rather than by common religious beliefs. He idolized Gandhi; as did his wife, Sohaila, whose father, Abbas Tyabji, had worked closely with the Mahatma.

In December 1947, India was a land at war with itself. A wave of intense communal rioting had both preceded and followed Independence and Partition. Professor Habib’s friends and family urged him not to take the long train journey from Aligarh to Bombay. They worried that he might be identified by his religion, and attacked. The patriot disregarded them, and delivered a presidential address whose words and warnings resonate 72 years later.

Mohammad Habib began his speech at the History Congress by praising Gandhi, whom he called “the greatest Indian teacher of all times”, under “[whose] divinely inspired guidance” his compatriots had “liquidated peacefully and by mutual agreement one of the most powerful empires the world has seen”. He then turned to the fact of Partition and what had led to it. He himself thought that the prime cause was the British creation of communal electorates, “a hideous arrangement no western democracy would have tolerated for a moment”. After Muslims were asked to vote separately, argued Habib, “differences of religion, inevitable in a large country like ours, were thus fused into two opposite political groups, and their increasing hostility was inevitable as with each succeeding election, and an expanding body of voters, all representatives were required to appeal exclusively to masses of their own denomination.” An inevitable (and noxious) consequence of communal electorates was that “the minority would lean more and more on the foreign power, and try to prove worthy of its support by sabotaging the national movement.”

Pakistan had been created as a homeland for Muslims. However, many Muslims had voted to stay behind in India. To those who questioned their commitment, Mohammad Habib answered that “the overwhelming mass of the Muslims of this land have an undoubted Indian paternity. It is true that there are innumerable Muslim families in India who claim a foreign origin, but this affiliation is purely fictitious.”

Habib warned Indian Muslims against nostalgia for the medieval past, when the rulers were of their faith. As he remarked: “The position of the Indian Musalmans in the middle ages was, if a very rough simile be allowed, not unlike Indian Christians during the British period.” Ruler and ruled might worship the same god; but in everything else they were separate and different. Habib further remarked: “In days when we were suffering from an inferiority complex owing to the brutal fact of a foreign government, which seemed unshakable, we made the best we could of our medieval Rajput Rajas and Turkish Sultans. That attitude is no longer necessary; and the plain truth has to be told that all our medieval governments were intensely exclusive aristocratic organisations... War and politics were games which only the well-born were allowed to play. The governments were in no sense governments of the people. An analysis of the officers of the Moghul and the pre-Moghul governments of Delhi will reveal the plain and sad fact that Muslims of Indian birth were rigidly excluded from the higher military and civil offices of the state. An Indian Muslim had as little chance of becoming a warlord of the Empire of Delhi as a Hindu Sudra had of ascending a Rajasthan throne.”

These warnings are still relevant, except that they apply to Hindus rather than Muslims. Indeed, Hindutva, the philosophy that animates our ruling regime, is entirely based on an inferiority complex. Hence its glorification of Hindu rulers such as Chandragupta and Shivaji, disregarding the fact that their regimes practised gender and caste discrimination absolutely at odds with what a modern, democratic republic should countenance.

As a thoroughgoing democrat himself, Mohammad Habib deplored the fact that, in the India of December 1947, “the hold of the ‘community’ over the individual is as complete today as it was in the middle ages.” Thus, “[s]ocial conventions and social prejudices, stronger than they have ever been in the past, strengthen the slavery of the individual. He is completely at the mercy of the community and its leaders in every sphere, including even the sacred sphere of his personal and domestic life.”

In India, the religious community defined and controlled the individual when he or she was alive, and when he or she died. Thus, as Mohammad Habib remarked: “It is impossible even now to be an Indian without being a member of an Indian community. There is, I believe, at present no graveyard in the land to which an Indian could lay claim merely on the basis of his Indian citizenship, and admission to every one of them lies through some community rite.”

To elevate the individual over the community, argued Professor Habib in 1947, “is the real challenge of the hour”. As he put it: “The present-day ‘communalist’ is a creature of tradition, a tradition so vitiated as to be next door to barbarism. The future ‘citizen’ will be a creation of laws consciously planned for the public good.” Habib accepted that “[d]ifferences of religion there are and will be; in this there is no harm.” However, he was emphatic that a central task of the Republic taking shape was to create “one State, one Law and one National Community for the whole land”. Mohammad Habib would certainly have been in favour of a common civil code for all citizens; elsewhere in the lecture, he lamented the fact that “the Indian citizen has neither a law of marriage nor a law of inheritance.”

In the last part of his lecture, Mohammad Habib turned to his own profession, the writing of history. He notes, accurately, that most Indian historians were from an elite background (they still are), and “this fact has inevitably coloured their vision”. Thus, while “[m]odern works on Indian history do not show any antipathy to the peasants and the working classes,” at the same time, “their attitude to the higher classes has been one of uncritical adulation.”

Because of this focus on the ruling classes, said Professor Habib, “[t]he lot of the Indian worker and everything connected with it — his wages, the prices of commodities necessary for the maintenance of his family, the struggles of his life, his joys, his sufferings and his hopes — all these are a virgin field for the historical investigator.” In asking for closer attention to the lives of workers and peasants, Mohammad Habib anticipated what became known as Subaltern Studies. Notably, even here he warned against dogmatism. Thus, while advocating a history from below, he observed: “I do not wish to postulate the theory of class-conflicts, nor am I unaware of how difficult the application of this [Marxian] theory becomes when, regardless of the fact that it is based on the experience of Europe during the modern machine age, it is applied to all countries and all times.”

I first read Professor Mohammad Habib’s lecture some 25 years ago, when, on the shelf of a university library, I came across the printed proceedings of the Indian History Congress of 1947. I came across an online text recently, and read it again, to be struck afresh by its sagacity and wisdom. The quotes offered above demonstrate this adequately, I think, but let me nonetheless offer some last examples. Back in December 1947, Professor Habib argued that while the State could fund historical research, it “should not interfere in the question of interpretation”. A free India, he said, “implies a free history of India in which every point of view has a right to be heard. Free and untrammelled discussion will lead us to the truth; and there is no other way of reaching it.”

Professor Mohammad Habib urged politicians to stay away from controlling or monitoring how the past was presented or re-presented. As he remarked: “A state-dominated interpretation of history is one of the most effective means of sabotaging democracy.” This was extraordinarily prescient, anticipating what Indira Gandhi sought to do with history and historians in the 1970s, and what Narendra Modi seeks to do with history and historians today.