The Russification of India 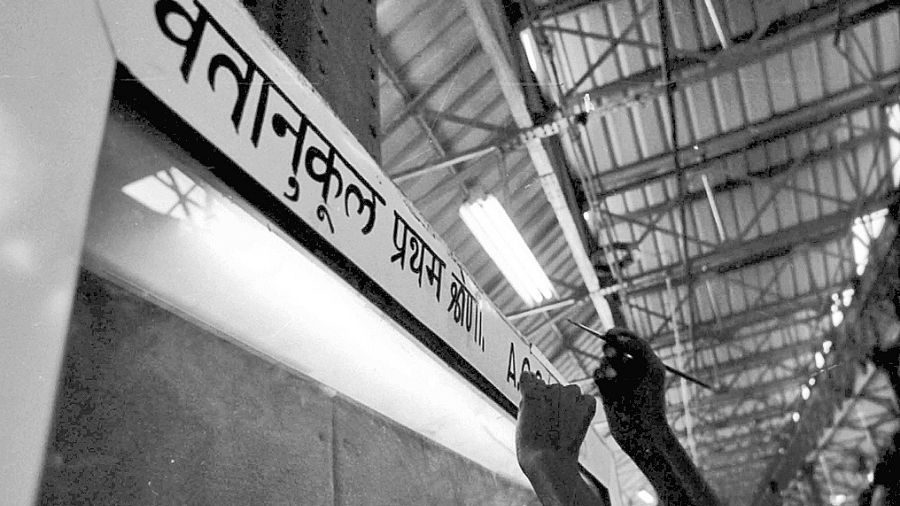 Even Nehru thought that a flexible and everyday Hindi was needed to bind India together.
Sourced by The Telegraph
Mukul Kesavan   |   Published 01.05.22, 03:48 AM

The case for Hindi has been variously made in recent days. Amit Shah told the Parliamentary Official Language Committee that in states where people speak in their own regional language, the alternative language should be Hindi and not English. Ajay Devgn, an actor from the Hindi film industry, reacting to an interview by a Kannada film actor, Kichcha Sudeep, asserted that “Hindi was and will always be our mother tongue and our national language.” Finally, Sanjay Nishad, Uttar Pradesh’s fisheries minister, declared that “Hindustan is not a place for those who do not speak Hindi. They should leave this country and go somewhere else.”

Shah’s statement was the most temperate, followed by Devgn’s which seemed to rhetorically confuse Hindi’s status as one of the Central government’s two official languages (the other being English) with its (non-existent) status as India’s sole national language, but the prize for peak chauvinism belonged to Nishad who said that Indians who didn’t love Hindi were actually foreigners or clients of foreign powers. Despite these differences in tone, it’s important to recognize the anxiety that these statements have in common: the sense that a multilingual country needs a single national language to be properly united.

This is an idea borrowed from the history of nation states in Europe. Most European nations have a single dominant language that effectively defines the nation: thus France/ French, England/English, Spain/ Spanish etc. When non-Western countries were constituted into nation states, they modelled themselves on European examples. The European suspicion of multilingualism is historical. Countries like England and France actively suppressed minority languages like Welsh and Provencal by not allowing them to be taught in schools or used for official communication.

A multiplicity of languages wasn’t just seen as redundant, it was seen as dangerous, a portent of disunity and incoherence. Even the Bible seemed to endorse this anxiety in the story of the Tower of Babel told in Genesis. In the beginning when men were virtuous, “the whole earth was of one language and of one speech.” Then, when humans succumbed to hubris and tried to build a tower that would touch the heavens, God intervened:  “Go to, let us go down, and there confound their language, that they may not understand one another’s speech. So the Lord scattered them abroad from thence upon the face of all the earth: and they left off to build the city. Therefore is the name of it called Babel; because the Lord did there confound the language of all the earth: and from thence did the Lord scatter them abroad upon the face of all the earth.”

This fear of being scattered by a babel of tongues haunts nation states. The Congress, thanks to Gandhi, had embraced India’s many languages by organizing the party into linguistic regions, but the rulers of the new republic in its early years were still attracted to the unifying discipline of a single language. We see this in the attempt to instal Hindi as India’s national language, its  rashtra bhasha. Even Nehru thought that a flexible and everyday Hindi was needed to bind India together.

But when the policy encountered serious resistance from southern, non-Hindi-speaking provinces, the republican State shamelessly fudged the matter. First Hindi was formally given pre-eminence, then English ‘temporarily’ retained, then the champions of regional languages were mollified by neutering Hindi: the provinces were allowed to communicate with the Centre in English. Did this fudge ‘solve’ the question of a ‘national’ language? No. But it wasn’t intended to. The republic’s leaders had served a long apprenticeship as anti-colonial pluralists: it had taught them how to procrastinate, to defer, to postpone, to buy time till hot button issues went cold.

A pluralist nationalism ducks the task of defining the national ‘self’. Recognizing that in a country as large and as diverse as a subcontinent one size can’t fit all, the republic improvised ways of avoiding the homogenizing definitions that Western constructions of nationalism pressed upon nation states. And thanks to this talent for postponement, republican India laid the spectre of Babel, the fear that linguistic diversity makes a democratic republic incoherent, disunited, unworkable.

But the ascendant nationalism that Shah, Devgn and Nishad subscribe to is a paranoid, hand-me-down version of Europe’s homogenizing nationalism. The Bharatiya Jana Sangh’s political motto combined the European nation state’s fixation with a single language with its own commitment to a Hindu State: ‘Hindi, Hindu, Hindustan’. It should surprise no one that the Jana Sangh’s contemporary avatar, the Bharatiya Janata Party, has, in its moment of ascendancy, reheated the ‘national language’ question. It can’t help itself: for a majoritarian nationalism, all nonmajoritarian communities, religious or linguistic, are subversive identities that need to be publicly subordinated.  The BJP’s restoking of the language controversy is plainly ideological because practically speaking, Hindi’s pan-Indian hegemony is a fait accompli. Most schools that cater to India’s pan-Indian middle class teach Hindi. Provincial elites everywhere voluntarily educate their children in English and Hindi because they recognize that Central government jobs and elite, all-India educational institutions become more accessible through these languages. Hindi’s status as an urban lingua franca  in cities far outside the Hindi heartland like Mumbai, Calcutta and Bengaluru makes it a useful language to travel with. Left to itself, Hindi would entrench itself ever more deeply without the provocations of Hindi’s propagandists.

So why rub it in? The reasons can be grouped under two heads: ideology and ignorance.

Having mostly captured the Hindi heartland which anchors its parliamentary majority, the BJP sees Hindi as a wedge issue that it can own. Since the states most impervious to its charms are non-Hindi speaking, the BJP sees doubling down on Hindi hegemony as an easy way of consolidating its grip over the heartland. This makes practical political sense; as Hindi-speaking provinces, given their birth-rates, become demographically more dominant, their weight in securing parliamentary majorities will only grow. For parties willing to disturb the pluralist peace, Hindi chauvinism is practical politics.

As a native Hindi speaker who travels under a South Indian surname, I can testify to the fact that nearly all Hindi speakers genuinely believe that Hindi was anointed by the Indian Constitution as the country’s sole national language. Their ignorance has been fostered by the deliberate blurring of the distinction between official link language and ‘national’ language by successive Central governments. The Hindi belt’s insularity reinforces their ignorance. Notice that Devgn ends his Hindi-affirming tweet with “Jan Gan Man”, the Hindi speaker’s generic name for the national anthem, used here as a patriotic slogan. The irony of invoking an anthem written in Bangla to seal the case for Hindi’s supremacy just doesn’t strike him.

The European Union has twenty-four official languages and three procedural languages: English, German and French. Even after Brexit, English remains one of the three link languages because many of the EU’s constituent countries prefer it to German and French. Instead of following the EU’s lead or India’s own republican practice in the matter of language, Amit Shah and his chorus have chosen to follow the Soviet/Russian model where the elevation and imposition of a dominant language become synonymous with patriotism and unity. If there is one lesson that Russification holds for the world in 2022, it must be that linguistic chauvinism doesn’t end well.