High growth rates might elude India for some time to come 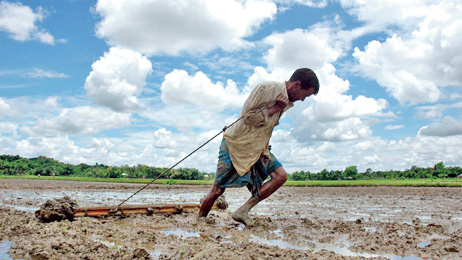 At the start of its 75th year, India’s economy is confronted with one of its most challenging times. Economic growth, which was slowing down from 2017-18, slipped into its deepest-ever trough last year. It is a misfortune that the once-in-a-century pandemic struck when the economy was already too weak — before the pandemic, in 2019-20, it grew 4 per cent, a rate reminiscent of the early decades after Independence. The celebration of 75 years of the economy is sobering: growth is struggling to emerge from the virus’s second onslaught in the last quarter, while rising prices and high unemployment push daily lives to the brink economically. It is reassuring that India’s economic base has come a long way since 1947: its size of Rs 203 trillion does not make economic distresses as visible as back then, and it is better equipped to handle shocks. There are other economic achievements too. But conditions surrounding the 75th birthday reinforce thoughts about what India has not achieved till now since 1947, namely an increase in the manufacturing sector share for the mass absorption of its surplus agricultural labour.

This is a path well-trodden by most developing countries to provide employment to the unskilled population in the course of development. But India has never been able to achieve this. In spite of decades of reforms, the share of manufacturing in the gross domestic product has stagnated at around 15-16 per cent. The economy has been powered on the strength of the expansion of services; this has underpinned much of its high growth rates; the segment was able to import foreign demand equally and fortify India’s external balances. Services have also generated employment but can never match the scales possible by mass industrial production that serves both domestic and foreign markets. The reason for this failure, or being a global outlier in this regard, is a separate matter. What is significant is that the missing stage of manufacturing extension in India’s development has kept disproportionately high numbers of its labour force engaged in agriculture (or ‘disguised’ unemployed because this remains unobserved) as employment growth has been too slow.

Weaker growth for several years, aggravated by the pandemic, has compounded unemployment. For example, the national unemployment rate has persisted at 8.8 per cent since 2017-18 according to the aggregate employment profile captured by the Periodic Labour Force Survey for July 2019-June 2020; this is under the ‘current weekly status’ category that asks if adequate employment was available in the week before the survey. However, because the economic base is very large, this distress has not been so perceptible.

For the first time, though, there are noticeable signs of the unemployment stress. These can be observed in a change in the sectoral employment shares that the PLFS has uncovered. The survey, which includes only one quarter of the pandemic, shows that the fraction of the labour force employed in agriculture increased 3.1 percentage points to 45.6 per cent from 42.5 per cent in the previous corresponding period (July 2018-June 2019). Above half of this displacement appears to be from ‘other’ services (1.9 points), a segment formed by education and health activities/services, recreation, cultural and sporting activities, salons, personal services and employment with private households. The shift from manufacturing employment is 0.9 points; here, the proportions employed decreased to 11.2 per cent of total workers from a stagnant 12.1 per cent in the two previous matching survey years.

These could be early signs of de-industrialization, though a longer watch is needed to confirm if the changes are temporary or permanent. The slide back to agriculture, a twist of irony as it were in the 75th year, represents higher ‘disguised unemployment’, the scourge of the formative years of economic development. This typically follows the reverse course, that is, towards manufacturing and services. Today, this probable degeneration is not merely a reminder of what hasn’t been achieved till now. Rather, it escalates anxieties about the outstanding challenge of employment that lies ahead.

There’s optimism that a vigorous return to sustained, high growth rates ahead will lift employment rates. This is built upon the 9.5 per cent uplift in GDP growth expected this year, with subsequent stabilization at 7-8 per cent or pre-pandemic highs. The locomotives are public infrastructure spending, exports and consumption demand. However, these can only drive a cyclical recovery but not over a longer period, where structural concerns remain. Enduring weaknesses of the past bear upon medium-term growth, where sustenance has few forces available with a diminished potential output. Illustratively, the fiscal arms are bound with public debt at 90 per cent of GDP, a level that India will struggle to lower in forthcoming years. Export prospects are presently sound, but medium-term sustenance of advanced countries’ growth is an open question. While India’s own competitiveness, steadily eroding for decades, faces formidable and tenacious competitors, to what extent the production-linked incentive schemes promote export-oriented manufacturing awaits assessment.

The consumption engine can, of course, be fired up only with a strengthening of incomes and employment leading to a critical mass of demand that then prompts private investment, which hasn’t been revived for a decade. Income shocks have been severe and frequent since 2016-17, with two successive ones delivered by as many infection waves in the last year alone. The 9.5 per cent rebound this year will raise aggregate real income (that is, adjusted for inflation) only 0.5 per cent over 2019-20 level, too feeble an impulse for meaningful demand acceleration. We must care about the effects of this prolonged fall in incomes upon consumption because households begin to perceive the decline as no longer temporary but permanent, and begin to adjust consumption expenditures accordingly. It is hard to ascertain if such changes have set in owing to the lack of a fresh consumer expenditure survey after 2011-12. But a permanent decline in consumption is not altogether dismissible given the stretching falls of incomes and employments.

In the pandemic’s wake, there’s ebullience about swelling technological unicorns, a booming IT sector and the underpinnings of personal incomes and corporate profits. The endurance and magnitude of the real economic effects of these factors are yet to be seen, while the pandemic’s fallout has further enlarged the gap between upper and bottom-income percentiles by all accounts. Can the winners provide a sufficient counter impulse to the depressing forces? Numbers in the bottom-earners’ cohort are way bigger.

Perhaps it’s time to recognize that the high growth rates of the new century will elude us in the foreseeable future. A sober pace is more probable, a lasting sprint less likely. Let’s hope that future celebrations of our independent economy happen in more favourable circumstances.