Groping in the dark 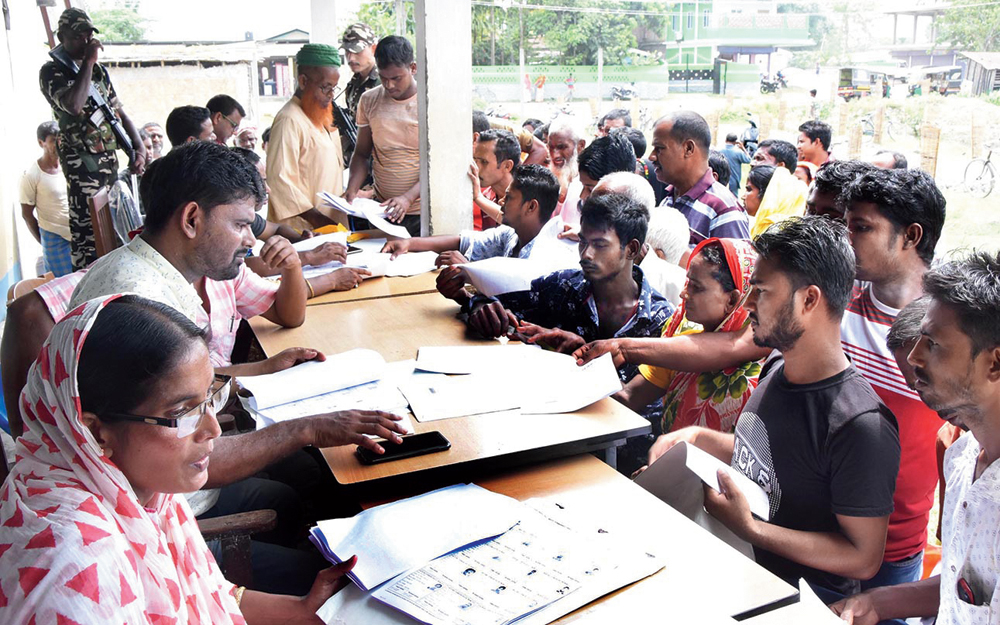 Mukul Kesavan (The Telegraph, November 24) offers clear and timely warning on the iniquities of the proposed National Register of Citizens in conjunction with the citizenship (amendment) bill. I feel, however, that the proposal carries yet other problems and dangers. It leaves not only our Muslim fellow-citizens but all of us deeply vulnerable.

The root issue is well noted by Kesavan: the NRC would place each of India’s 1.35 billion people under suspicion of falsely claiming citizenship, and task them with exonerating themselves. In other words, they would be assumed guilty until they proved themselves innocent. There are already certain laws said to place this onus on the accused. To impose it by default on every person in the land staggers belief. Is there any instance in history of any nation, let alone one so large and, all told, so stable and politically organized as India, consigning its entire population to such an inquisition?

It is the more astonishing that the proposal should be revived after its dismal trial run in Assam. The Assam NRC exposed the people of that state to untold harassment, stress and misery. The poor lost their meagre savings and sacrificed their daily earnings to pursue their claim, sometimes only to be cheated by middlemen. Errors in implementation occurred on a heroic scale: overlooking soldiers and freedom fighters, registering the child but not the parent, one sibling but not another; in one reported case, only one of a pair of twins. People were placed in detention centres not only on grounds later overruled but owing to clerical blunders and mistaken identity. The exercise cost the nation Rs 1,600 crores. I leave out of account the situation of the 19 lakh individuals excluded from the register. An untold number who finally made it lost their worldly security and peace of mind along the way: their lives will never be the same. The NRC was touted as stopping foreign infiltrators from depriving genuine citizens of their income and benefits. Yet the NRC itself has done just that for very many Assamese.

At the end of it all, the quarters who most clamoured for the Assam NRC have condemned and rejected it. It seems set to become a dead letter. Yet we propose to repeat the folly across India. The Assam NRC had its origin in a political accord and a directive of the Supreme Court. An all-India NRC and CAB would be gratuitous political exercises with no legal or constitutional compulsion; rather, it might contravene major legal and constitutional principles.

One point needs to be strongly urged, though simple common sense suggests it. Anywhere in India, poor people of little education will find it hard or impossible to produce the papers likely to be required by the NRC or CAB. An Aadhaar card, ration card or PAN card is no proof of citizenship. An electoral card or a passport is proof, but may not count unless issued before a cut-off date: in fact, one of the arguments for the NRC and CAB is that they will eliminate people who have fraudulently obtained such documents. Going by the procedure in Assam, people without documentary proof of money, property or education from decades ago will be hard put to qualify. Obviously, this excludes virtually the whole of India’s poor, and tribal communities who may have dwelt in their territory for undocumented millennia. It will also — and this does need stressing — exclude a host of others.

The cut-off date is important too. It was 1971 in Assam. There is talk of reverting in the all-India exercise to 1951, the year of the first NRC. Most of India’s current population was not alive at that date. They will have to rely (like very many even with a 1971 cut-off) on records relating to their parents or remoter ancestors, with more paperwork to prove the relationship. Unless one holds ancestral property or is an ardent family archivist (which assumes education and means to start with), few people can conjure up such proof.

This is where even educated, affluent, non-Muslim citizens might be shaken out of their current complacence. They cannot rest assured that they will escape unscathed, especially in Bengal or the Northeast, which are likely to bear the brunt of the exercise.

We should not take an alarmist stand. It is possible that, by unguessable means, the government will work out a smooth, non-invasive and equitable process. What we can reasonably demand is that before the passage of either bill, the government informs the nation of the detailed procedure it proposes to adopt, and allows ample public discussion of this momentous issue. A mere assurance of good intentions and State benevolence will not suffice, in the light of Assam’s ordeal. Belligerent threats to drive out the intruders, often in grossly intemperate language, will only add to the alarm.

In particular, we need to know more about the procedure adopted for the CAB, where there is no precedent to go by. The exclusion of Muslims from its provisions is a deeply disturbing constitutional issue likely to be fought out in court. If I do not allude to it further, it is not because I would underplay its importance, but because others (including Hindus) need to grasp that they too have cause for worry, or at least questions to ask. Only then might they accept that this is a common cause engaging all Indians. In what follows, I am merely laying out some questions in the hope of answers. I am seeking not confrontation but reassurance.

Under the proposals, one will not automatically qualify as an Indian citizen if one belongs to a religion other than Islam. One will have to apply for citizenship in terms of the CAB. For this, one must plead religious persecution (or fear of persecution, their own or their forebears’) in a neighbouring country. Deposing before a joint parliamentary committee, the Intelligence Bureau identified a ‘small number’ of 31,313 such people. What then of all those who, for the reasons above, do not make it to the NRC, but who have not suffered such persecution nor had any connection with those countries? Residents of ‘safe’ states, far from international borders and ethnically distinct from the people across them, will face the greatest quandary. It cannot be the intention of the State to make them swear false affidavits. How can they protect their identity as Indian citizens?

Those who might make the plea with a semblance of truth face an opposite problem. The Intelligence Bureau opined before the JPC that if such persons had not declared their situation (as fleeing persecution) earlier, “it would be difficult for them to make such a claim now”. We may add that more basically, if they now apply for citizenship, they acknowledge that they are currently not citizens, and never have been. Yet they have lived all their lives as Indian citizens. They hold electoral cards and passports. They invest money and pay taxes as resident Indians. They may hold government or semi-government jobs only open to Indian nationals. They have never had to think about these matters. Will the ground now sink under their feet? Will they be prosecuted? Will they and their children have to rebuild their lives from scratch if and when they obtain citizenship?

Such fears may be unfounded, but they are natural. When the citizenry feels in the dark about radical State-crafted plans for their future, they are justifiably anxious. There is nothing they want more than reassurance in clear and concrete terms, taking them into full confidence. If our rulers have thought their strategy through, they should share it with the nation. If they have not, it behoves them to do so. We might otherwise walk into a disaster that leaves demonetization looking like a picnic.