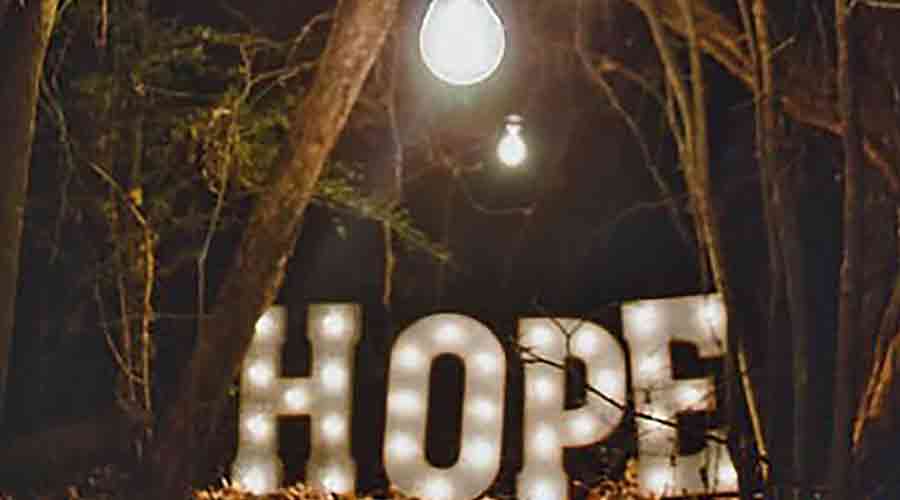 Dystopia-dependent depression is too easy a mode in which to start a new year. Perhaps we should attempt to do the far more difficult, counter-intuitive thing by reaching instead for mad optimism — given the sheer, mind-shuttering direness of the multiple lunacies currently engulfing us, we might as well deploy the counter-craziness of vividly projecting scenarios that go well beyond the logical, ‘best-case’ models.

So, 2022 will be the year in which we will finally see the petering out of Sars-Covid-19. Given that Calcutta and West Bengal have been nationally behind the curve on most variants but are well ahead on Omicron, the post-Corona sun will rise first on our Sonar Bengal and Rupashi Kolkata. Even as the rest of the country is still reeling from the last tail-lashes of the monster, we will be the first state in the country to regain whatever counts for normalcy. This will provide a much-needed boost to our economy and to the general happiness-quotient of all of us residing in the lap of Mama Bangla.

Our state government and ruling party, chastened by their electoral misadventures in far corners of the country where they have no business, will return their attention to the betterment of our state with renewed vigour. Made consultative, collegiate and sagacious in the triple forge of the pandemic, the cyclones and the horrendous state election battles, our leaders will have learnt many lessons. In close collaboration with scientists, researchers and thinkers, the state government will shift from yo-yoing top-down populist whimsy to putting into practice much-needed reforms. The clean air periods of the last two years will be remembered and curbs on vehicles and industrial pollution will aim for and attain ‘Lockdown Level’ air-quality. The whole idea of ‘growth’ will be turned on its head. Instead of bloating the GDP on the backs of the wealth of a very few, we will start working towards decreasing inequality and increasing the quality of life for the majority of the state’s inhabitants.

This, in turn, will rapidly make us the envy of the rest of India, nay the subcontinent. From Quetta to Kohima, they will speak of the Bengal Model with awe and emulatory avariciousness. In copycat legislation, private car traffic will be chopped down across the country, factories will find it increasingly difficult to pollute water-bodies with impunity, other conceptual and actually-executed ideas — gifts given by WB — will be received by many authorities and peoples with gratitude.

Following the rout of the BJP-RSS in the state elections (the narrow, dodgy ‘victory’ in Uttar Pradesh also counting as a defeat), the power shifts in the
coalescing national Opposition will balance themselves and the fractured and fraying National Democratic Alliance will be confronted with a viable challenge.

In the meantime, good things will also happen in other parts of the world. At some point in 2022, Donald Trump will go to jail for a long time on multiple counts for various crimes, ranging from the financial to the treasonous. This will give pause to and reverse the far Right’s attempts to rig the US’s voting systems. The American mid-terms will throw up proper Democrat majorities in both Congress and Senate, where the so-called ‘left-wing’ of the party will hold more power, allowing/forcing Joe Biden and his administration to bring in long-needed reforms to healthcare, environment and, indeed, foreign policy.

In Brazil and Hungary, Jair Bolsonaro and Viktor Orbán will be ejected from power, signalling the worldwide push-back against faux-democratic strongmen rulers. Vladimir Putin, prescient as ever, will pull back from a war against Ukraine after having squeezed various concessions from the West. In France, Emmanuel Macron will narrowly squeak in against Éric Zemmour, Marine Le Pen and other challengers, allowing him to reverse the push for racist, anti-immigration policies and an EU-destroying ‘Frexit’.

In Britain, we will finally see the political defenestration of Boris Johnson aka Baron of Brazen Falsehood. This will give Britain its first Punjabi prime minister, who will quickly get rid of the first Gujarati home minister. Happily, this will not be enough to stop the complete disintegration of the Tory Party and the breakway of Scotland from the Union as well as the unification of Ireland. The Labour Party and the Liberal Democrats will also be altered to the point where they are reduced and unrecognizable. The new political formation that comes to power in Eng-Wales will start to apply to re-join the European Union and be politely asked to wait in the queue behind Turkey.

Despite stubborn entrenched interests, emergency situations will oblige countries and societies all over the world to bring in and enforce massive carbon-cutting laws. The huge cliff-faces of blind selfishness will start to crumble exponentially. It will still be too little and too late (there is no scope for optimism here) but it will be better than nothing.

Across 2022, unevenly, in pockets, in oddly-shaped sections, people and their governments will start to act upon the fact that we are all connected, that issues of ecology, inequality and the absence of genuine democracy are all inextricably woven together, that action on one front unavoidably means action on the others. Different economic and political conglomerations triggered collectively by self-interest will start to bring intense pressure on dictatorships and quasi and faux democracies.

By the end of the year, the Union government in Delhi will be hanging on by its teeth, wheels and engine-parts falling off, under challenge from a vast chunk of the country that no longer has any faith in it and under interrogation from an international community that can no longer afford to let a big country like India continue its meltdown.

When we turn around and look back at this point next year, we will note that we went through a year that was no less dramatic and stressful than the two that preceded it, but that we are in a much better place than a year ago.