Gandhara: A confluence of cultures 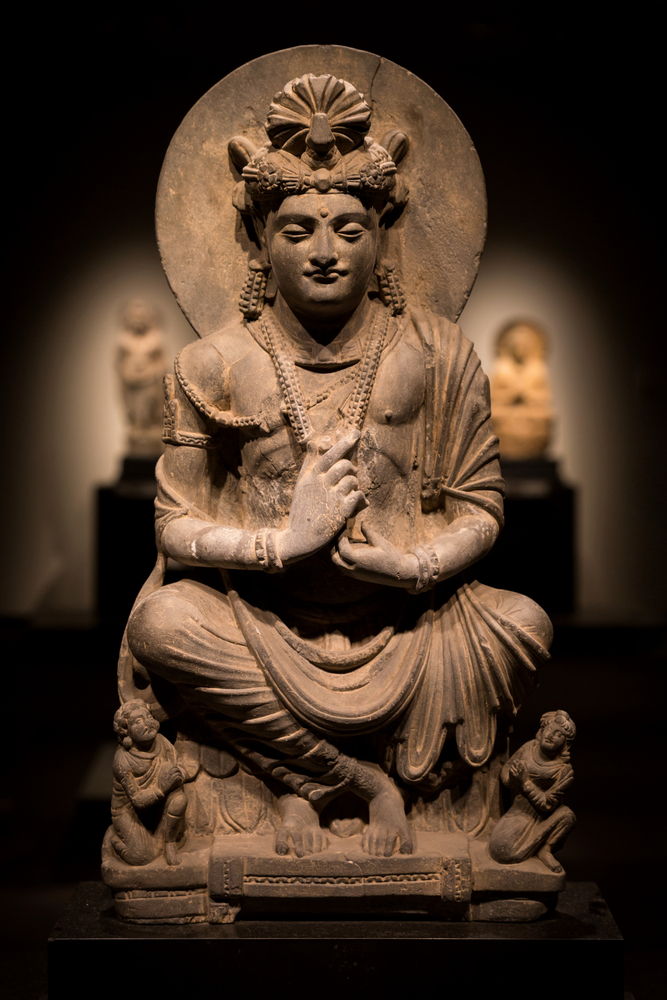 Heinrich Zimmer, extolling the achievements of Gandhara artists in deviating from Hellenistic ideals and transforming the Buddha image into “the personification of a pure essence”, wrote in The Art of Indian Asia way back in 1955: “For there is no pretext in these statues of an actual human body... what has become visible is the figuration of a spiritual attitude...”

Ancient Gandhara art is usually identified with these Buddha images unearthed in north-western Afghanistan and eastern Pakistan over the past 150 years. So one should not be a little surprised when one realizes that the legend next to the image of an imposing metallic head of a woman with a severe profile that seems to have sprouted from the diminutive head of a buffalo, which dominates the cover of the June 2019 issue of Marg: A Magazine of the Arts, goes thus: Gandhara: A Confluence of Cultures. Seems to be the right image at the wrong place, for we don’t really associate the goddess mounted on a lion with Gandhara culture. But this issue, edited by Naman P. Ahuja, who is a curator of Indian art and teaches at Jawaharlal Nehru University, focuses on the latest finds from recent excavations and on advances in Gandhara art studies that have revealed waves of migration and invasions, including the best known one by Alexander the Great, to that territory and the multiplicity of cultures that flowered there and, as the caption states, ‘Rhyton: The Buffalo-Slayer Goddess, c. 600-700 AD, Iran, Sasanian period. Silver; height 19.1 centimetres’. The longish caption states that this ceremonial drinking vessel is shaped like a cornucopia and that it came from Afghanistan of the Turko-Shahi period, when Hindu images were disseminated. This period is largely unexplored. Sure enough, she is Durga Mahishasuramardini, and such representations on a larger scale and with certain variations are not unknown to Calcutta pandals.

Ahuja’s introduction encapsulates the contents of this issue that is enriched by the most gorgeous images of current discoveries. “... They examine migrations during different periods — from the Bronze Age, to those following Alexander the Great, to the establishment of Hindu temples under the Shahi kings and the movement of Ghaznavids and Mughals from there to other parts...” Now the same valleys of Kandahar, Ghazni and Peshawar have turned into battlefields and the stronghold of the Taliban, causing irreversible damage to the region’s priceless legacy. The contributors are leading academics mostly from the West, including Waleed Ziad, who now teaches at Habib University, Karachi. Ziad writes about the “enigmatic” coins produced as sacramental objects discovered in a natural limestone cave of the valley of Sakra peak.

The issue opens with a piece by Benjamin Mutin and Henri-Paul Francfort on the interactions, dating back to the Neolithic period, between Central Asia and the north-western regions of the Indian subcontinent known as Gandhara. Rapid urbanization, industry and illegal excavation pose a real threat to Pakistan’s Gandhara sites. Abdul Rehman recommends state-of-the-art research facilities and the study of Sanskrit and Kharosti in Pakistan to unravel the mysteries of the past. Michael Henss writes about the Hund statues — some, of the Bodhisattva and male and female dancers of unbaked painted clay — discovered about 20 years ago in the Greater Kashmir region of ancient Gandhara. Owing to their uniqueness, their authenticity was questioned and scholars avoided them. But as Henss writes, “These statues are of no small importance in the history of South Asian art, as they connect the long-standing traditions of Gandhara and Swat to Kashmir...”

Another breathtaking marble piece depicts a three-headed Shiva, probably from the Kabul valley, Hindu-Shahi period, c. 8th century AD. Alka Patel, in her essay on the Ghaznavids and Ghurids and the region’s pre-Islamic past, has a different perspective. “[R]ather than the destruction of the large (Bamiyan) Buddha, its survival through a millennium and a half should arrest our attention.”