We don't mean to encroach upon the territory of the psychologist. But we, teachers, have observed over the years that far from growing up to be resilient individuals, our children are becoming increasingly fragile. And this trend is being reinforced by society. 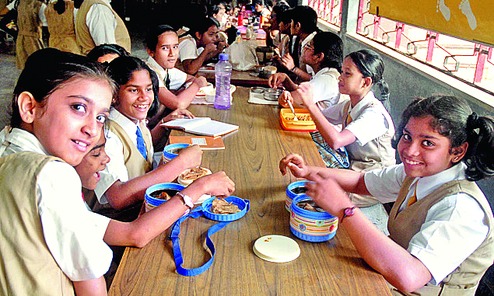 We don't mean to encroach upon the territory of the psychologist. But we, teachers, have observed over the years that far from growing up to be resilient individuals, our children are becoming increasingly fragile. And this trend is being reinforced by society. Much has been said about over-parenting, helicopter-parenting, hothouse-parenting and death-grip-parenting but it is high time that some of us should emulate the little boy who shouted out that the emperor had no clothes on. I mean that we need to tell parents to stop protecting their children from life's vicissitudes. Children must be allowed to feel sad or disappointed at times and to learn to cope with setbacks, defeat and failure. This is how the fragility factor can be addressed.

The general notion is that you can only spoil a child by giving it an overabundance of material things and helping it to keep up with the mini Joneses in the class or neighbourhood. But 'spoiling' can happen in other ways - by trying to keep the child constantly happy and cheerful. In other words, taking all the 'downs' out of its life. A sanitized childhood spells disaster for the child's future - it will never be able to cope in the face of adversity, which is bound to confront every individual sooner or later.

The other day, a veteran school educator told me the story of this young father who made his little son, who had not won any race, climb the victory stand after the school sports meet so that he could take his photograph. This may seem rather 'cute' to many people, but the father was not helping his son to learn that you win some and you lose some. Parents have become so intensely achievement-oriented that children are not growing up with the normal doses of failure and success and the experience of trial and error. Children have become so thin-skinned that every little thing becomes a serious issue - if he/she is not given a substantial role in a play, if he/she does not make it to the school basketball team or if other children have picked up a quarrel with him or her.

Why do children have to be praised all the time? Why can't teachers scold a child spontaneously without having to worry about being blamed for undermining the child's self-esteem? A casual remark triggers off a chain reaction with counsellors and psychologists stepping in to help the stricken child. This is reflected in society in a different way. Cinema halls are forcibly shut down for showing a particular film, 'objectionable' books are burnt and events are boycotted for some imagined insult to some community or the other. A child must learn to take criticism and not take every casual or frivolous comment to heart. Every child must eventually learn to stand up for his or her principles and express his or her opinions when it really matters.

Things have become so bad that schools are now finding it difficult to detain a child in a senior class (they are automatically promoted by law till Class VIII) as parents claim that the child would not be able to face the humiliation and would "go and do something terrible". The tragedy is that more and more children are actually doing the ultimate "terrible" thing and taking their own lives over what seems to be a trivial matter. Suicide is a very complex matter and cannot be explained away easily. Sometimes it is only the catalyst that is reported in the papers - a tiff with a friend or a scolding from a parent or a teacher. Recently, it was reported that a ten-year-old girl had killed herself because her friends had told her off for not bringing money for tiffin and because her friends' mothers had scolded her for using abusive language. As a precautionary measure for the future, the principal of the school called all the parents and told them not to send "fancy" tiffin - just roti and sabzi.

This directive, I think, is again a faulty way of protecting children. The young must be taught to face the reality of an unequal world and learn to be happy with their lot. Actually, it is quite lovely to see children bringing different kinds of snacks and sharing them. It is seldom that a child likes the contents of his or her own lunchbox and often it is seen that the humble muri gets preference over a pizza slice. A school can be a levelling force up to a point. Students are expected to wear the same uniform and their learning environment is common to all. However, they cannot be shielded from talks about parties, designer clothes and foreign holidays. It is important to sensitize children to these issues. They are bright and eager enough to be engaged in discussions about how a classmate can feel rejected. It is the responsibility of parents to see that their child is comfortable in his or her own skin and secure with his or her own identity. It is good to have a robust sense of the self and to be proud for reasons other than ownership of expensive things. I refuse to believe that they are too young to understand as I have seen over the years that children have taken these things in their stride and dealt with natural inequalities with poise and grace. A child should be able to say, without feeling embarrassed or humiliated, that he/she would not be able to go on a particular excursion as it would be too expensive. And parents should not feel upset about it. We often refer to these lines from Desiderata at school, "If you compare yourself with others,/ you may become vain or bitter;/ for always there will be greater and lesser persons than yourself..."

Overprotection leads to fragility. But I am more than sure that the achievement-oriented parents of today are contributing to it by generating achievement-oriented anxiety in their offspring. This is highly infectious. But then, school is handy if anything should go wrong. Juvenile depression, anxiety, exam-related panic attacks are all conveniently laid at the door of the school. The "system" is too demanding, there are too many tests so there is too much pressure, or too few tests so they are not adequately prepared, the other children in the school are too snooty, the teacher doesn't smile enough, and so on. Parents are either comparing notes in their respective WhatsApp groups or discussing their children's delicate state of emotional health with the school authorities.

A school has always been looked upon as a place where children are helped to attain academic and non-scholastic goals which will, in turn, help them to gain entry into good colleges. But traditionally, a school is also a place where a young person's character is moulded. Hence it should be equally important for parents to know and care whether their child is learning to play fair, to accept defeat manfully, to win gracefully, to respond to failure positively and to take the ups and downs of life in his or her stride. If they trust the school, they should let it do its work of bringing up a robust and resilient child - constant interference and protection will only result in the weak and fragile child of today and the emotionally immature adult of tomorrow.

The author is director, Modern High School for Girls, Calcutta