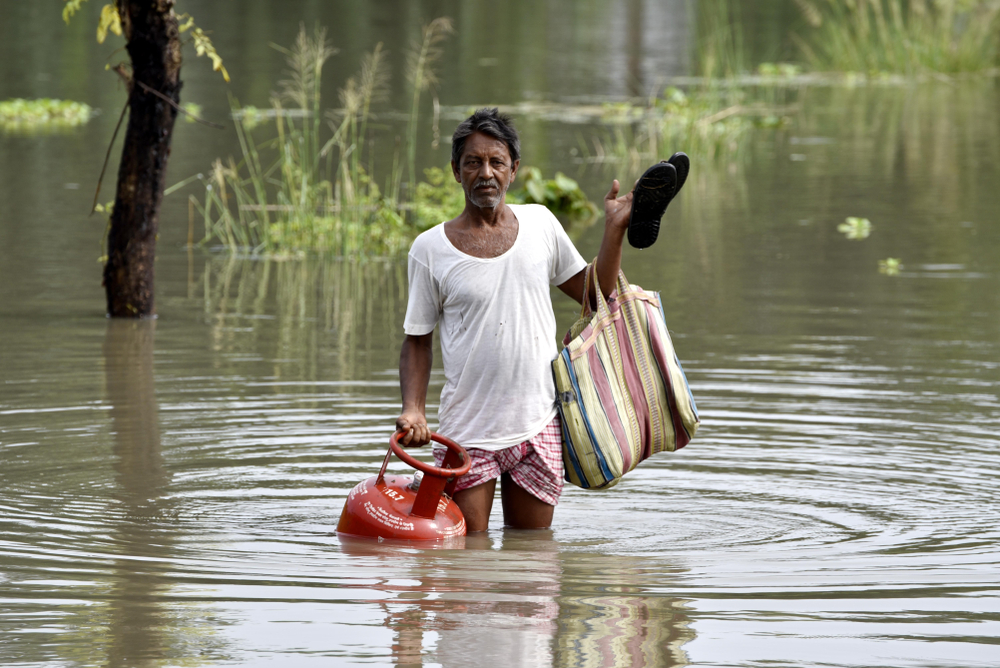 A man carries a cooking gas cylinder and other items through flood water in Jania village in Barpeta, Assam, in this July 12, 2019 picture. Flood management needs to focus not only on flood defence strategies but also on flood risk preparation, mitigation, protection, and post-flood recovery
(Shutterstock)
Nirmalya Choudhury And Abdul Hamid   |     |   Published 01.09.19, 08:13 PM

Floods in the Ganga-Brahmaputra-Barak flood plains have become an annual phenomenon. The scale of the disaster is enormous, dwarfing the menace of floods in many other states. At its peak, the floods affected around 4,600 villages and 57.5 lakh people in Assam and 1,240 villages and 81.6 lakh people in North Bihar. The administration responded with rescue operations and set up relief camps and relief distribution centres. But these do not match the enormity of the disaster. A concerted effort towards flood governance through resilience building is the need of the hour.

There is a discernible pattern in the government’s response to floods: making long-term promises and implementing short-term disbursements. This year, with the floods at their peak, the Assam government reiterated its zeal to work towards a permanent solution to the flooding, including the proposal to form a Northeast water management body. This would be a welcome step, but only if the government takes bold steps to bring in a paradigm shift in flood governance.

The discourse of experts on flood management coalesces around flood defence strategies that aim to minimize the probability of flooding through structural interventions such as dams, embankments, bank strengthening works, rivets and spurs, and the dredging of rivers. The demand for dredging of the Brahmaputra to contain floods in Assam, or the proposal to construct a high dam in Nepal to prevent floods in Bihar, is a case in point. But such flood defence strategies have their own challenges.

Building dams on rivers, which carry huge quantities of silt, might actually be a fruitless exercise. With suboptimal reservoir management, the dams could enhance the vulnerability of the flood-prone populace through reservoir-induced flooding. Embankments suffer from the ‘build-neglect-rebuild’ syndrome. Unfortunately, they are better known for breaches than for protection. This year, around 24 of 33 districts in Assam have reported damages in embankments. In Bihar, the data on embankment are missing in the daily reports issued by the disaster management department. While the average weekly rainfall in 12 affected districts in Bihar between July 18 and 24 was mostly deficient, the number of villages and people adversely affected by floods continued to rise. One wonders if the embankments constricted the spread of floods or were aiding the process.

The discourse needs to move away from structural interventions towards the life and the livelihoods of communities residing in recurrent flood-prone areas. An entire gamut of flood risk management strategies needs to be simultaneously implemented through a combination of structural and other kinds of intervention. This implies investments in health, education and livelihoods as well as developing roads, culverts, sluice gates on embankments, and embankment rehabilitation. This would push the flood management paradigm beyond flood defence strategies to include flood risk preparation, mitigation, protection, and post-flood recovery strategies.

Such initiatives would require the participation of diverse stakeholders to be successful. If the frequency of high-intensity rainfall rises, embankments might still have an important protective role to play. But this will only be possible if the ‘build-neglect-rebuild’ syndrome gives way to participatory embankment management.

The simultaneous implementation of diversified strategies can lead to resilience building in recurrent flood-prone areas. Only then would populations succeed in resisting the adversities of flooding, absorb and recover from the devastation, and continue to adapt and transform their lives and livelihoods by maximizing the use of available resources.