Punjab, which votes today, has been on India’s mind 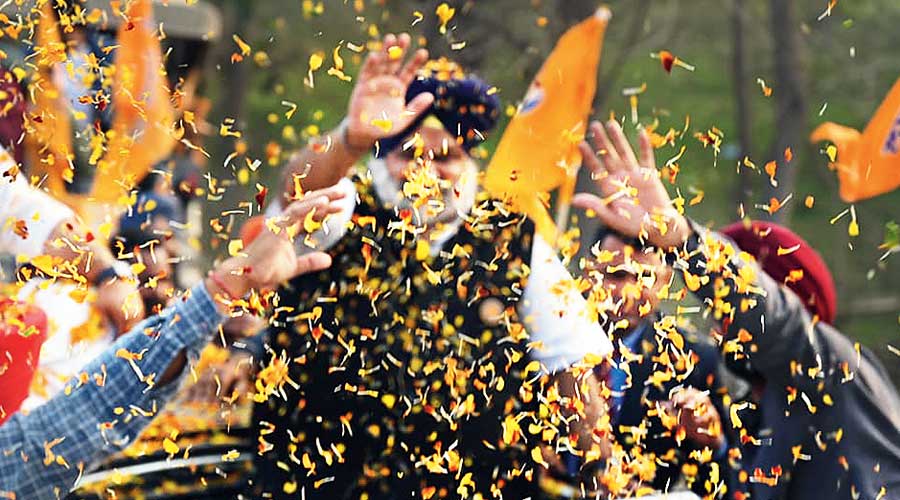 Today is voting day in Punjab. It is Punjab’s date. Whichever party wins Punjab’s favour and whoever becomes its chief minister, the people of that state to whom Guru Nanak’s teaching, the shabad, is god’s word, would have spoken. As also those of other faiths in that multi-faith state. No one can say with any certainty what the electronic voting machines will say on March 10.

Be all that as it may, I will remember the campaign for the Punjab elections this year for one statement above all. In fact, I will remember it for just that statement. Sukhbir Singh Badal, president of the Shiromani Akali Dal, when asked about the chief ministership, said, “Anybody can be CM. He has to be competent. Why should there be a difference between Hindus, Sikhs and Muslims?” The point he was making was that while it would be natural for the Sikh-majority state to have a Sikh CM, there was no reason why a Hindu cannot be chief minister of Punjab. Or, for that matter, even a Muslim.

Was that a case of someone who does not stand a chance in the ‘practicals’ being lofty in theory? Was it an attempt to garner minority attention?

In the shop of political stationery today, hatred is the name of the fastest moving paper, abuse the name of the bestselling pen, and cynicism the ink of choice. The firm collects a GST, of course, on every transaction — God Save the Truth.

And, yet, I do not want to see the younger Badal’s amazingly eclectic statement as being anything but that. It is a democrat’s enunciation of a Republican principle. India, a Hindu-majority country, with Muslims being the biggest minority community, has had a Sikh prime minister. A hugely respected statesman of international repute. And for ten years. So why should Punjab, a Sikh-majority state, with Hindus being minority number one and Muslims minority number two, not have a Hindu or a Muslim CM? Why ever not? Now, if a Hindu politician were to say that or — stretching one’s imagination to near-breaking point — a Muslim candidate or leader were to say that, it would amount to a job application. But when a Sikh says that, and one who is a chip of chief ministerial timber, we are hearing the vocabulary of statesmanship.

I know next to nothing about this scion of the Badal family. Nor, for that matter, have I studied the fluctuating fortunes of his party. But coming as it has from a leader of a party which started as a movement for Sikh self-respect and Sikh self-assertion, I found that sentiment stunningly different. If anything is possible in the world of politics, everything is possible in that of Indian politics and, who knows, even Sukhbir Singh Badal may be surprised by what political destiny has to offer to him. On the other hand, as is more likely, in the practicals of today, he may have to wait for another day. But, for me, he has made a mark which only he has made. And that is a mark that needs to be made today, that needs to be made in the communally divided, socially fractured, politically scarred politics of today’s India.

One hundred and one years ago today, exactly today, on February 20, 1921, Punjab was again on India’s mind. And it spoke of Sikh character, Sikh courage, Sikh conviction.

India had barely composed itself from the scorching trauma of Jallianwala Bagh and the brazen cold-blooded murder, at General Dyer’s command with the full backing of Lt. Governor Michael O’Dwyer, of several hundred innocent lives — Hindu, Sikh, Muslim — on April 13, 1919, when it heard of Nankana Sahib. The city, then in West Punjab, now in Pakistan, where Guru Nanak was born and where he began to teach his wisdom, blazed into the political consciousness of a horrified India.

“News of the tragedy at Nankana Saheb on February 20, 1921,” Gandhi wrote at the time, “was staggering. I am so constituted that the sufferings of others make me miserable. And so when I heard of the tragedy at Nankana I felt like wanting to be among the victims. There seemed little doubt that nearly one hundred and fifty men of the Akali party were foully murdered and their bodies mutilated whilst not a single one of the murderers was apparently hurt by the Akali party. At least one Akali was tied to a tree in the temple ground and probably burnt alive. The Akali party seems to have been treacherously admitted and the gates closed on them. Everything I saw and heard pointed to a second edition of Dyerism more barbarous and more fiendish than the Dyerism of Jallianwala.”

This is not the occasion, nor is there any need today to go into the motivations of that foul act. The mahant who master-minded it has answered for his deeds. But what needs to be recalled is what Gandhi described as the “second edition of Dyerism”. More fiendish and barbarous than Jallianwala? Gandhi felt it was. I will not compare the dire with the dreadful. But I cannot and do not miss the point he was making. There is a Dyer lurking among us — in Hate.

We are capable of hating and hurting without compunction one another’s faith. Yes, that is it — faith. Faith in India being the natural and equal home for all its citizens, faith in India not giving majorities the right to bully minorities — be they males against females, monopolists against the economically fragile, upper castes against Dalits, religious majorities anywhere against religious minorities there, alternative lifestylers against orthodoxy.

That same year — 1921 — the then Prince of Wales visited India. The Non co-operation movement was at its peak, Hindu-Muslim unity around the Khilafat cause the mantra, Swadeshi the slogan. Headgear, ‘foreign’ caps were a special focus. Wear khadi saris, khadi caps, not foreign ones, was the injunction. Gandhi and the Congress had asked for a total boycott of the royal visit. On the day the Prince disembarked in Bombay, ‘non co-operators’, in other words, patriots, nationalists, fighters for swaraj and swadeshi, both Hindu and Muslim, went on a rampage, attacking Europeans they could find, but put simply, those who did not by their attire and deportment look Hindu or Muslim. Parsi men wearing their telltale headgear and Parsi women in their distinctive saris, of course of fine fabric with embroidered borders, were under nationalist, patriotic ‘gaze’. One venerable Parsi gentleman was asked to doff his topi. The grandsire refused. He was beaten, thrashed. But he would not part with it.

Gandhi, who was in Bombay at the time, said, “I motored with some friends to the area of disturbance and heard the most painful and most humiliating story of molestation of Parsi sisters. Some few were assaulted and even had their saris torn from them. The news pierced me like a dart. I alighted. Immediately the crowd surrounded me and yelled Mahatma Gandhi ki Jai! That sound usually grates on my ears, but it had grated never so much.”

Voluntarily adopted clothes, caps, turbans, veils, dupattas, tufts, tikas are not about deportment. They are about dignity, izzat, svabhiman.

February 20 is a date with izzat, svabhiman, maryada.

Punjab’s, which is indistinguishable from India’s. And India’s.

Rabindranath Tagore knew what he was doing when, ahead of all the other invocations of India’s great regions, he placed Punjab.

Placing Punjab first is placing India first. All of it, together. And equally.