Advertisement
Home / Opinion / Felled by the virus past and present

Felled by the virus past and present 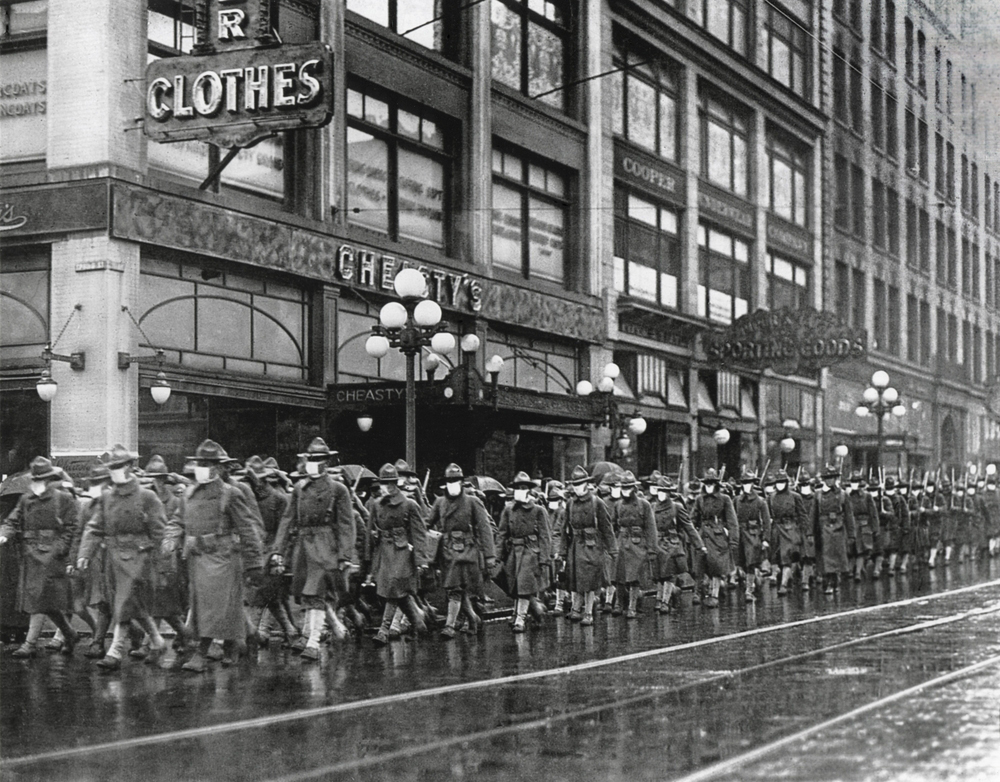 US soldiers in Seattle wear masks to prevent influenza in December 1918. The soldiers were on their way to France during the influenza pandemic
(Shutterstock)
Arunabha Sengupta   |     |   Published 18.03.20, 07:36 PM

The summer of 1918 was terrible, wrote Ahmed Ali in his novel, Twilight in Delhi. Influenza had broken out in epidemic form, and there was not a single house that had not been visited by death. India soon became the focal point of that epidemic, which killed 50-100 million people in one great sweep across the world in the last years of the first Great War. While commemorating one hundred years of that tragedy — the Spanish Flu — in human history, most commentators have highlighted two points. One, that the great pandemic had been largely forgotten even in India which lost 15 million lives, the highest for any country. And two, another influenza pandemic is inevitable, sooner rather than later.

In 1918, bacteriology was in its infancy, the existence of viruses was in its speculative stage, and antibiotics were 30 years away. What was saving humans from ‘deadly corruptions of air’ by invisible pathogens was their immune system, which had evolved through many thousand years keeping the memory of its past encounters intact. But the immune system can become vulnerable when confronted by a new pathogen introduced in the environment, as it happened in the New World where native Americans died like fleas when exposed to malaria and small pox brought by Europeans. This can also happen when an old pathogen changes its signals, as it happens with flu viruses that cause minor epidemics.

But other factors were necessary for a pandemic of the scale of the Spanish Flu to occur. Soldiers living in close contact in the mud-filled trenches of Flanders, shortage of food and supplies, inadequate medical services, and warring nations suppressing truth provided the triggers. The path of the emergence of the new H1N1 influenza strain is still a matter of debate but the flu’s passage to India — it was carried by Indian soldiers returning from France — its arrival in Bombay in September 1918, and its subsequent progress to other parts of India following the railway tracks, infecting habitations along the major rail routes first and then moving inland, have been well-documented by the sanitary commissioners.

The disease followed a singular pattern all over the world then and in subsequent pandemics. The places affected first had the highest mortality rate and people affected later recovered better. Also it came in waves. The September-October outbreak was actually the second, but far more lethal, attack that had been preceded by a milder outbreak in summer. What was unique was that it killed a significant number of healthy adults: their robust immune systems mounted an attack against the hitherto unknown virus strain entering through respiratory passages and, in the process, produced a cytokine storm filling the lungs with fluids. Young couples died in scores leaving many homes with only orphaned children. Surprisingly, very few made the epidemic an issue; even M.K. Gandhi writing to his son, Harilal, about a death in his family from the flu observed, “Such news is pouring from everywhere so that the mind is now barely affected.” The discontent that brewed silently amongst people might have indirectly fomented the freedom movements later but the great tragedy and its lessons seemed to have left no lasting mark.

Reporting to King Philip about the cause of the great plague, French physicians blamed planetary positions which had “caused a deadly corruption of air around us”. This time, the physicians know exactly what the cause was and blamed it on humanity’s own folly. The destruction of natural habitations had helped foster new killer pathogens, which could live and grow in animal species, then infect human beings, and then lead to human-to-human transmission, thereby starting an epidemic. Other drivers for a pandemic include largescale migration, overpopulated cities, industry-level animal farming and an exponential rise in international travel.

The consequences would be immense, but higher in terms of social and economic losses than lives lost. Experiences of previous pandemics, newer techniques of molecular research speeding up vaccine production, a coordinated global intervention and so on could lead to a virus — the coronavirus, for example — to gradually lose its virulence.

But India needs to be careful because a pandemic is both a biological and social phenomenon. Prevailing conditions make the subcontinent a perpetual focal point — they include a high-density population, poor standards of hygiene, underbudgeted and overstretched public health facilities, the absence of regular vaccination drives and, above all, the tendency to try unproven methods as solutions.

It is not without reason that India was amongst the last few countries to free itself of the scourges of small pox and polio.

Coronavirus outbreak is pandemic: WHO