Politics and Play | The Gandhis, as these assembly polls show, are a gift to the BJP 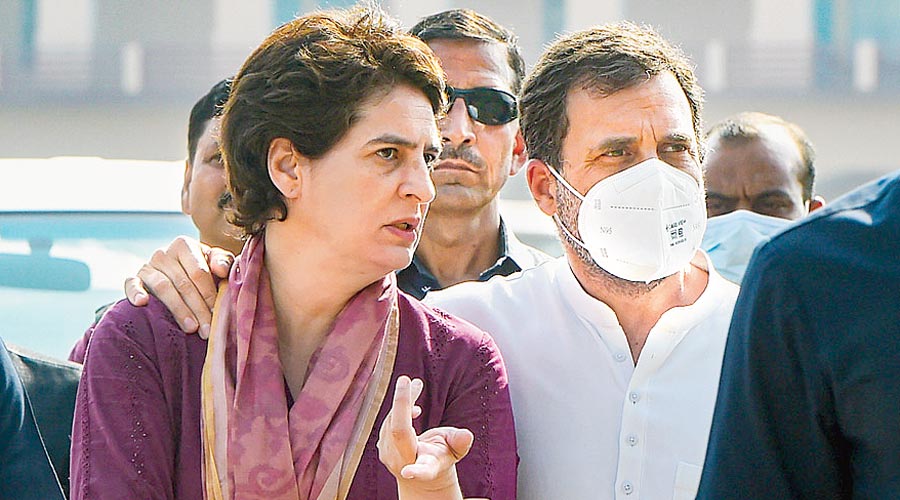 Every electoral contest is a story of winners and losers. While much of the commentary on the results of the recent assembly elections will inevitably highlight their major winners, this column shall instead focus on the principal loser. For, beyond the comfortable re-election of Yogi Adityanath and the Bharatiya Janata Party in Uttar Pradesh and the impressive victory of the Aam Aadmi Party in Punjab, this latest series of assembly elections confirms — yet again — the steady and possibly irreversible decline of the Congress Party.

Consider, to begin with, India’s largest state, Uttar Pradesh, which sends as many as 80 MPs to the Lok Sabha. In colonial times, this state was an epicentre of the Congress-led freedom movement. After Independence, it provided India with its first three prime ministers. However, in the late 1960s, the Congress’s hold on the politics of Uttar Pradesh began to visibly weaken, and for at least thirty years now it has been a marginal player in the state.

This time, the latest Nehru-Gandhi to enter politics, Priyanka Gandhi, took it upon herself to seek to revive the party’s fortunes in Uttar Pradesh. Although she declined to shift her home base from Delhi to Lucknow and refused to fight an assembly seat herself, Priyanka made regular trips to the state. These were met with breathless excitement by those sections of the media (and social media) that still haven’t stopped seeing the Nehru-Gandhis as an Indian version of the House of Windsor. Every visit, every press conference, every announcement was reported by these dynasty-worshippers as presaging an electoral resurgence of the party in Uttar Pradesh. In the event, the Congress under Priyanka Gandhi obtained a vote share of just over 2 per cent and won even fewer seats than it had in the last assembly elections.

In Uttar Pradesh, Priyanka Gandhi at least got some marks for effort, if none for impact. In Punjab, where the Congress was in power, her brother, Rahul, threw away his party’s chances of re-election through the capricious replacement of the incumbent chief minister less than a year before the polls. Although he was not popular with a section of the MLAs, Amarinder Singh had wide experience in politics, and, more importantly, had taken a strong stand in favour of the farmers’ movement. A year ago, the Congress and the AAP both had equal chances of winning Punjab. But then Amarinder’s replacement by the relatively unknown Charanjit Singh Channi, and Channi’s undermining by Rahul Gandhi’s indulgence of the destructive Navjot Singh Sidhu, threw the entire state unit in disarray. In the event, the Congress was comprehensively defeated by the AAP in Punjab.

Turn next to Goa and Uttarakhand. In both states, the BJP was in power but its governments were deeply unpopular, seen as corrupt and unfeeling. In Uttarakhand, the BJP changed two chief ministers in a bid to stem discontent. In both states, the Congress was the principal Opposition party; yet in each case, it was not able to mount a strong enough challenge to regain power. Nor, finally, could the Congress make a significant impact in Manipur, once a state where it was the natural party of governance, and where (as I send this column to press) it appears to have won twenty fewer seats than last time.

The latest round of elections confirms, yet again, what some of us have known for a long time — that at least under its current leadership, the Congress is incapable of ever again becoming a major player in national politics. After leading the party to a humiliating loss in the 2019 general election, Rahul Gandhi resigned as Congress president. His mother, Sonia Gandhi, then became ‘acting’ president of the party; two-and-a-half-years on, the party still hasn’t taken any steps to choose a successor. The Congress has remained under the de facto control of the Family; with the results that we are now seeing.

Back in 2019, the Congress had a chance to reinvent itself; it threw it away. What might it do now? I believe that for the good of the party, as well as for the good of Indian democracy, the Gandhis must not just exit from the party’s leadership but retire from politics altogether. For it is not merely that Rahul and Priyanka Gandhi have shown themselves markedly incapable of making the party a competitive force in state and national elections. It is also that their very presence in the Congress makes it easy for Narendra Modi and the BJP to deflect attention from the government’s failures in the present by resorting to debates about the past. Thus, charges of corruption in defence deals are answered with reference to Rajiv Gandhi and Bofors; charges of suppressing the media and incarcerating activists are met with references to Indira Gandhi and the Emergency; charges of losing Indian land and soldiers to the Chinese army with reference to Jawaharlal Nehru and the war of 1962 and so on.

In its eight years in power, the Modi government has made many boasts and offered many promises. Yet, when reckoned by objective criteria, its record in office has been underwhelming. It has overseen a decline in growth rates (visible even before the pandemic set in) and a surge in unemployment; it has savagely set Hindus against Muslims; it  has allowed our status to decline in the neighbourhood and in the world; it has corrupted and corroded our most important institutions; it has ravaged the natural environment. In sum, the actions of the Modi government have damaged India economically, socially, institutionally, internationally, ecologically, and morally.

Despite all these failures, if Narendra Modi and the BJP remain in pole position to win re-election in 2024, a key reason is that it still has as its principal ‘national’ Opposition the Congress under the Nehru-Gandhis. Parties such as the TMC, the BJD, the YSRC, the TRS, the DMK, the CPI(M) and the AAP can mount an effective electoral challenge to the BJP in areas where they are the main Opposition to it. This the Congress cannot really do — as the latest results from Goa, Manipur, and Uttarakhand once again show. The weaknesses of a Congress led by the Nehru-Gandhis are particularly visible during general elections. For instance, in the 191 seats in the 2019 elections when they were in a head-to-head fight with the BJP, the Congress won just sixteen. With Rahul Gandhi posited as its prime ministerial alternative to Narendra Modi, the Congress’s strike rate was a mere 8 per cent.

So far as the BJP is concerned, the Gandhis are a gift that keeps on giving. On the one hand, they do not remotely represent an effective electoral challenge to it. On the other hand, the Gandhis allow and encourage the BJP to dictate the terms of the national political debate — by locating it in the past rather than in the present.

In an India that is becoming less feudalistic by the day, having fifth-generation dynasts at the head of India’s most storied party is a problem. What is a serious disadvantage becomes a crippling one once we juxtapose with unearned privilege a lack of political intelligence. Living as they do in the closed circle of their sycophants, the Gandhis have little understanding of how Indians in the twenty-first century actually think. In the harsh but depressingly accurate characterization by Aatish Taseer, Rahul Gandhi is an “unteachable mediocrity”, his utter unsuitability to the politics of the present manifest in his repeated references to his father, grandmother, and great-grandfather.

Whether they know it or not, whether they sense it or not, the Gandhi family has become active facilitators of Hindutva authoritarianism. If they depart, even if the Congress disintegrates, someone or something else with more political credibility shall take their place. Then those of us who oppose Hindutva will be better placed to think of, and struggle for, a future for India beyond the awful present.