The BJP’s blueprint for Bengal 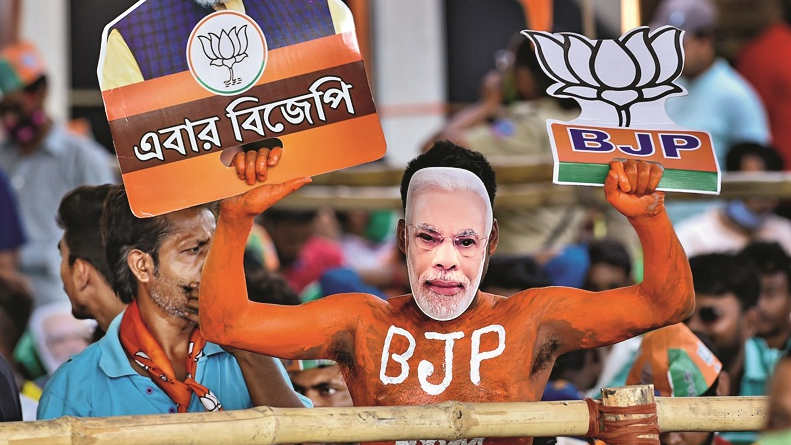 Against the backdrop of the Ganges in high tide at a riverside dhaba in Diamond Harbour, three Muslim residents were taking in the cool, strong wind and chatting about politics. I butted in to ask about voting preferences: one was loyal to the Trinamul Congress while the second supported the Mahajot; after Cyclone Amphan, his faith in the TMC was shaken and he wanted to back ‘Bhaijaan’ — the cleric, Abbas Siddiqui — of the Indian Secular Front. The third, Alauddin, kept munching jhalmuri and said nonchalantly that after due deliberation he had decided to vote for Narendra Modi who was the only individual who could save the country from the mess it was in and make India’s name known across the world. He was serious, his decision based on the desire to participate in the new big show in town and countryside.

These Bengal residents, in the South 24 Parganas at least, did not show the alarm one may expect from a community in the eye of the BJP storm. Asked about vote division, they just smiled vaguely. The BJP, so far in their perception, was akin to a huge sound and light show that also offered money and short-term election employment and had a big star of the jatra called Narendra Modi. Naturally, the story varied elsewhere, such as in the complete Muslim consolidation for the chief minister, Mamata Banerjee, after a vicious BJP campaign in Nandigram, but local subplots also reveal layers of this epic battle. There are multiple contradictions that emerge in the telling of these Bengal elections: on the one hand, there are cries of ‘Jai Shri Ram’, both as a protest slogan and a Hindutva clarion call in the hinterland, but in Kalighat, the epicentre of the Hindu faith in Calcutta, most pundits and shopkeepers declared themselves loyal to Didi.

The BJP’s dramatic landfall in West Bengal has certainly upturned pre-conceived notions about the state. The novelty factor apart, there are actually familiar templates used by India’s pre-eminent party at work here. First, the cadre of the sangh parivar and the BJP work on new territories with a missionary zeal as elections per se are not an end but a means. Towards that goal, they use shock and awe that basically boils down to Modi, money, media (management), Muslim (profiling) and caste mobilization with a social engineering map in hand. As the BJP did in Uttar Pradesh, the template involves giving priority to non-dominant sections of society, be they Dalit, other backward classes or scheduled tribes. In its own perverse way, it’s the only radical thing happening to the social fabric of Bengal.

The blitzkrieg is an expensive undertaking. One must follow the money to fully understand the scale of the onslaught ever since Modi swept the Hindi belt in the 2014 general election. That was India’s most expensive election, eclipsed only by the 2019 general election — according to annual audit reports filed with the Election Commission of India. Since then, the BJP has become the richest party in the nation’s history, monopolizing political finance often through untraceable means such as electoral bonds (On March 26, the Supreme Court refused to stay the release of fresh electoral bonds ahead of assembly polls in four states and a Union territory).

Money talks as it did when the BJP managed to form a government in Madhya Pradesh in 2020 after a section of the ruling Congress defected just as in the preceding year members of the ruling Janata Dal (Secular) and the Congress had crossed over in Karnataka. Electoral victory is, therefore, not necessary for eventual triumph. There is always on the table an offer to members of rival political parties, something that’s lured many members of the TMC in the pre-election season. Bengal’s is arguably the first election that takes place with the calculation that a narrow win may not ensure a five-year term for Mamata Banerjee. Unless the BJP is utterly defeated as it was in the Delhi elections a year ago, post-poll defections would have to be factored in.

There are also traditional reasons for the groundswell of support for the national party. With the Bengal Opposition decimated in the 2016 assembly and 2018 panchayat polls, the BJP has filled a vacuum even as anti-incumbency grew in areas devastated by Cyclone Amphan that cut a path through TMC strongholds in May last year. People are divided between wanting change and still adoring Didi but not necessarily her party. In this flux, the BJP has been able to create a great hype that projects it as a possible winner. After all, in close state elections, people are more inclined to vote against ruling parties if they believe the opposing side can win the seat or the state. That would particularly apply to Bengal with its culture of political violence.

No party understands the power of narratives as the BJP does, the reason why it has set up IT cells for each seat and made their controversial national IT cell chief the co-in-charge for West Bengal. That individual has been called out several times by fact-checking sites, but clearly the strategy is to create emotion and stoke communal prejudice, facts notwithstanding. After all, research on new media shows that sensational, divisive, fake news spreads faster than dull, factual news. Indeed, the BJP’s blundering journey in its search for historical Bengali icons was full of comic errors and apparent haste, but in the final reckoning does not seem to have damaged the reputation of the prime minister. He is being seen as a powerful figure among voters in town and countryside, and the idea of direct cash transfer, true or false, has appeal among the poor.

Bengal is one of the states from which the largest numbers of migrants pour into other parts of India. They, too, were part of the suffering phalanx of humanity that made the reverse migration a year ago. If the BJP does well, it would suggest that Modi is soaring above the problems his decisions created in the earthly realm. We must then conclude that his image has somehow been disconnected from the dramatically announced but spectacularly bad calls such as demonetization on November 8, 2016 and the national lockdown (with four hours’ notice) on March 24, 2020.

If Mamata Banerjee holds it together, then a realignment of Opposition forces could begin. But structurally, the TMC is a crowd around a leader, who emerged fighting one entrenched force and having vanquished old demons now wages battle against another arch-enemy. Whatever the outcome, she is the only woman chief minister in India, and unique for having fought so fiercely against both the Left and the Right.

Bengal is a special place that’s given exceptional ideas to India. If it cannot thwart the BJP as a Tamil Nadu can, it would be because great ideas have not been matched by great transformations on the ground either in terms of incomes or subaltern caste assertion. There has, in hindsight, not been the empowering social change that the Dravidian movement brought about in Tamil Nadu followed by wealth generation through industrial growth and welfare schemes. Only a very small section of society can, therefore, relate to the idea of the Bengali identity being exceptional and immune to outsiders, while many are now discovering the room to negotiate with the political class through multiple caste assertions. The game is indeed afoot.