Faith and the absence of fraternity 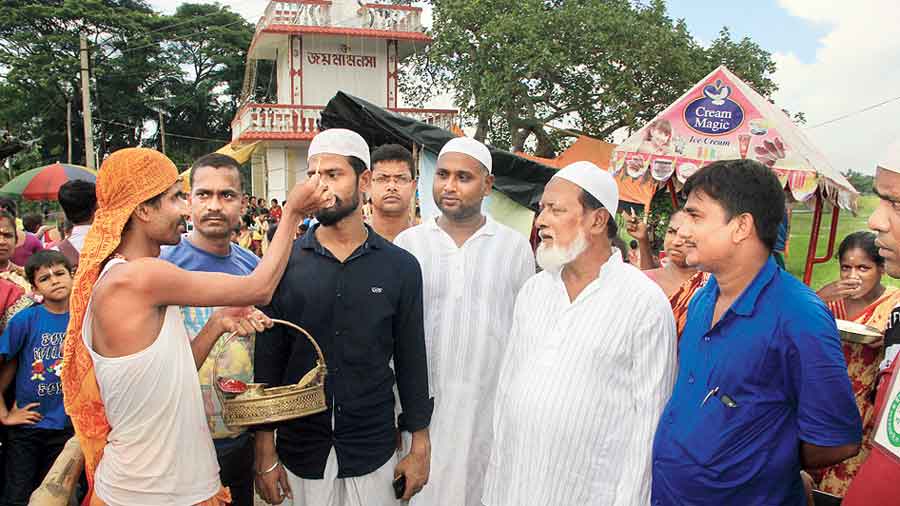 Did you know that the last question in Pew Research Center’s widely discussed ‘Religion in India’ survey reveals that 46 per cent of all Indian men wear beards? It’s shocking but true that the Indian cricket team (male) isn’t representative of desi men at large. Nearly all its members, with perhaps one exception, are bearded regardless of faith. The optimistic way of reading this hirsuteness is to see it as a bristling sign of unity in diversity. Bearded we bond, shaven we shatter. Maybe Kohli’s men are the way forward: perhaps we should all grow beards in the cause of national unity.

This survey of 29,999 Indians is stuffed with questions and answers about the relationship between both religion and nation and religion and religion. Q69 asks “How important do you think it is to support India’s cricket team, to be truly Indian?” Pew’s surveyors have clearly been reading up on Norman Tebbit’s test for national loyalty, the desi version of which used to be exclusively directed at Indian Muslims. Pew’s finding is that Hindus and Jains top the list of the faith communities that believe supporting the Indian cricket team is important to be “truly Indian” at 79 per cent. Christians and Sikhs bring up the rear, with 63 and 65 per cent, while Buddhists and Muslims sit in the middle, with 74 and 75 per cent, respectively.

There are some people for whom that result will be a disappointment because it doesn’t bear out their biases. There are others for whom it will have come as a relief: thank god this hasn’t given the bigots a stick to beat Muslims with. But either way, it’s curious that Pew should ask that question given the fact that the designers of the survey surely know (or ought to) that this question has been weaponized against Indian Muslims for decades. Moreover, why would a survey ask that question now in a country where, in recent years, religious and social minorities, especially Muslims, have been singled out and persecuted as disloyal and ‘anti-national’? Asking a loaded, majoritarian question is a bad idea in principle, regardless of the answer.

Pew doesn’t think that it is asking a loaded question. It has an appendix on the survey’s methodology defending the questionnaire: “To improve respondent comprehension of survey questions and to ensure all questions were culturally appropriate, Pew Research Center followed a multiphase questionnaire development process that included focus groups, cognitive interviews, a pretest and a pilot survey before the national survey [italics added].”

If you crossed a corporate brochure with the jargon of the Minority Report, this passage would be their lovechild. It doesn’t, however, explain the puzzling vagueness of some of the survey’s questions.

Q11y, for example, asks respondents: is there a lot of discrimination against ...? The blank is filled in successive questions with India’s principal religious communities: Hindus, Muslims, Christians, Sikhs, Buddhists and Jains. The answer to this question is strikingly uniform: a large majority of every religious community believes that no religion or caste in India is discriminated against.

Similarly, in answer to Q4, about the current economic situation of religious communities, large majorities of every religious community affirmed that their material condition was good. In the follow-up question (Q5), clear majorities within all communities felt that their economic prospects were going to improve in the next twelve months. (It’s important to note here that the survey was mostly completed before the pandemic and had to be cut short on March 23, 2020 because of the lockdown.)

Even Narendra Modi’s corporate cheerleaders might have hesitated to argue that India before the pandemic in early 2020 was an economically buoyant, middle-income paradise where a rising tide of prosperity was lifting everyone’s boats: an even-handed, non-discriminatory, pluralist heaven. And yet, a Martian whose knowledge of India was derived exclusively from reading the answers to Pew’s scrupulously weighted and curated questions might come to that conclusion.

There are several possible explanations for this. Perhaps the figures for the economic downturn before the pandemic were just wrong, or a species of wishful thinking on the part of economists hostile to Modi. Equally, it’s possible that the lynchings, the love jihad and anti-Romeo campaigns, the assaults on Muslim universities, the discriminatory CAA law and its complementary pincer, the National Register of Citizens, didn’t add up to discrimination in the minds of India’s Muslims; this is possible, but not likely.

Perhaps Q11y (whether religious communities are discriminated against) might have been differently answered if it had been more specifically phrased. If, instead of asking an abstract, almost existential, question about discrimination, the survey had asked each community’s members whether they had been discriminated against in concrete contexts, like the real estate market or the job market, they might have ended up aggregating very different answers.

I don’t know a single Muslim in Delhi who hasn’t found renting or buying a house an ordeal and it is unlikely that the experience of Muslims in other Indian cities is radically different. Yes, this is anecdotal evidence and intelligently collected data are always better than anecdotal impressions, but if a data-gathering exercise doesn’t ask specific questions, it might get bland answers, unmoored from real-life experience.

The answers to Pew’s questions about Indian attitudes towards neighbours from other religious communities suggest that Indians of all faith communities would rather live in communal ghettoes than diverse neighbourhoods. In a society where there is a power differential between an economically depressed religious minority and a hegemonic and relatively more prosperous majority, the desire of both to live in segregated neighbourhoods is not the same phenomenon. One might be a preference shaped by discrimination, insecurity and fear and the other might be a form of ethnic assertion powered by superiority and contempt. Questions like this flatten that asymmetry and homogenize the answers.

The survey and its interpreters have made much of two seemingly paradoxical findings. One, that Indian religious communities prefer the company of their own kind and, two, that despite this, they see religious diversity and toleration as a quintessentially Indian value. Sudipta Kaviraj once described this style of co-existing peacefully without much interaction as “back-to-back adjacency”. But he was describing a pre-modern, pre-colonial equilibrium. When journalists celebrate this indifferent co-existence as a sign of segmentary tolerance, they invoke a vision of fuzzy communities, long dissolved by the enumerated majorities and minorities of the nation state.

The survey’s most substantial findings constitute a formal documentation of the fact that the erstwhile Bharatiya Jana Sangh’s slogan, “Hindi, Hindu, Hindusthan”, has been consolidated into a substantial demographic and political reality. Nearly two-thirds of all Hindus believe that true Indians must necessarily be Hindus and a majority of Hindus believe that a true citizen is a Hindu Indian who speaks Hindi. The lesson of the Pew survey is that segregated co-existence in India today is not a symptom of India’s boundless tolerance for difference but a euphemism for majoritarian supremacy.

Criticizing a survey is a curious exercise; it can feel a bit like shooting the messenger. This is meant to be a poll of what Indians think after all, not Pew’s considered opinion. The thing is, an electoral poll’s accuracy is measured against the election it seeks to anticipate. A survey like this one, designed to take a country’s religious temperature, is unfalsifiable. Once published it just exists, an online repository of quantified truth.

Some of its questions are considered and the answers to them tell us important things about India. Others (like the one about supporting the Indian cricket team and true Indianness) are a form of louche, nose-picking curiosity that should never have made the questionnaire. Exercises like Pew’s not only aspire to authoritativeness, they also have authoritativeness thrust upon them. The reasonable response is an engaged and attentive scepticism.