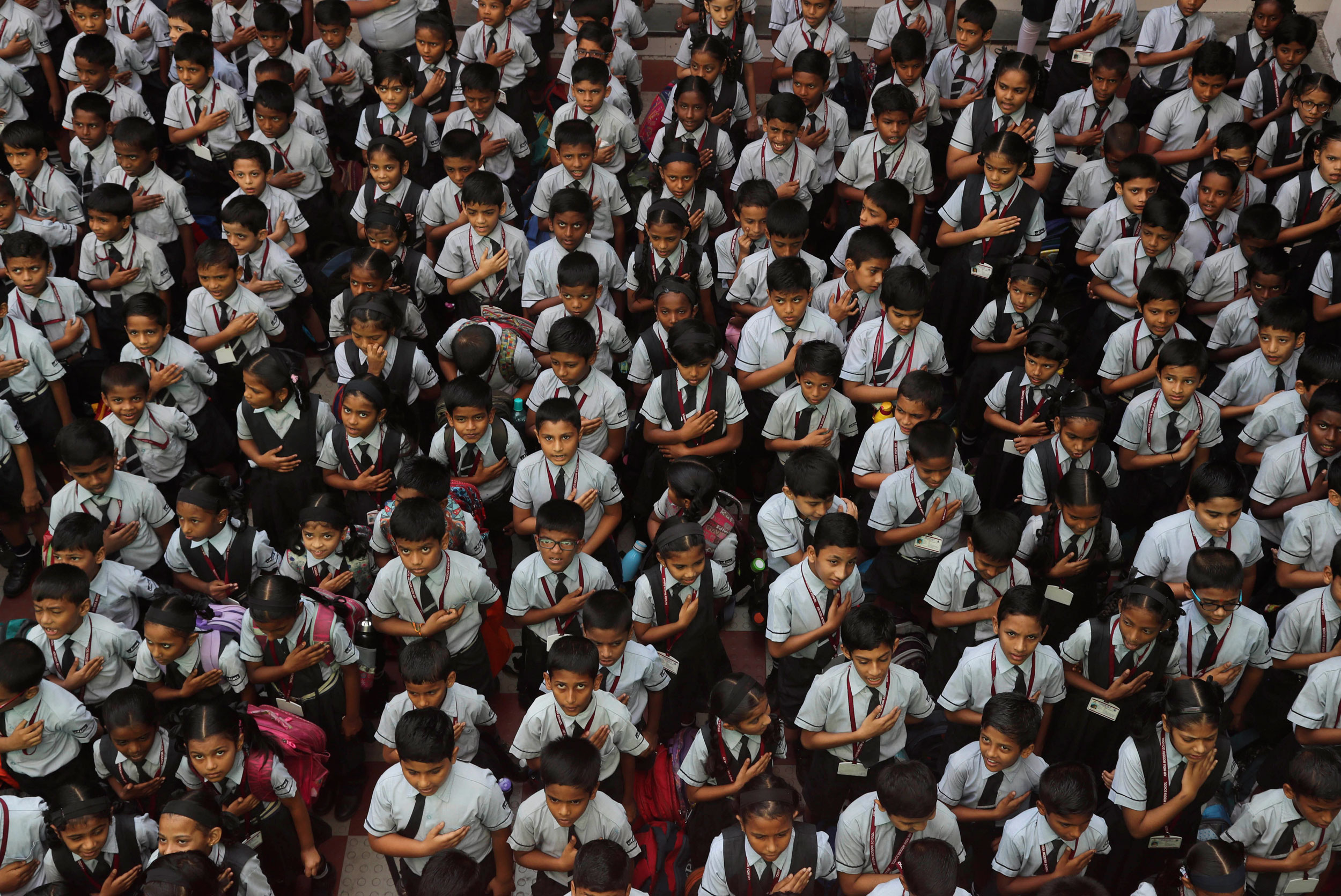 School children recite the Preamble to the Indian Constitution during their daily assembly in Mumbai on Monday.
(AP)
Samantak Das   |   Calcutta   |   Published 27.01.20, 01:50 PM

Perhaps the best thing about our present rulers is that they have forced us to go back and examine the founding vision and principles of a country that, despite its many failings and unfulfilled promises, we can take justifiable pride in. It has now become incumbent on us to revisit these principles and decide for ourselves what needs to be done to keep that vision alive.

“WE, THE PEOPLE OF INDIA, having solemnly resolved to constitute India into a SOVEREIGN SOCIALIST SECULAR DEMOCRATIC REPUBLIC and to secure to all its citizens: JUSTICE, social, economic and political; LIBERTY of thought, expression, belief, faith and worship; EQUALITY of status and of opportunity; and to promote among them all FRATERNITY assuring the dignity of the individual and the unity and integrity of the Nation; IN OUR CONSTITUENT ASSEMBLY this twenty-sixth day of November, 1949, do HEREBY ADOPT, ENACT AND GIVE TO OURSELVES THIS CONSTITUTION.” (Capitals in the original.)

Let us consider the words “socialist” and “secular”, added to the Preamble through the Forty-Second Amendment of 1976. Champions of the CAA 2019 point to the fact that these words were incorporated during the dark period of the Emergency and, therefore, those opposing the CAA are mistaken to assert that the Constitution is a fundamentally socialist or secular document in nature. This is plainly wrong.

In the debates of the Constituent Assembly, available at `https://www.constitutionofindia.net/` the proposal to include the words “socialist” and “secular” was rejected on the ground that what was obvious did not have to be explicitly spelled out. Regarding “socialist”, no less a person than B.R. Ambedkar stated that such an amendment would be “purely superfluous” since “apart from the Fundamental Rights, which we have embodied in the Constitution, we have also introduced other sections which deal with directive principles of state policy... If these directive principles to which I have drawn attention are not socialistic in their direction and in their content, I fail to understand what more socialism can be”.

The evidence for the secular nature of the Constitution is, if anything, even stronger. As early as December 13, 1946, that is, just four days after the first meeting of the Constituent Assembly on December 9, 1946, Jawaharlal Nehru placed a resolution — commonly known as the “Objectives Resolution” — which he said, “is in the nature of a pledge”, a resolution that “is something higher than the law”, a resolution which stated, among other things, that “all power and authority of the Sovereign Independent India, its constituent parts and organs of government, are derived from the people... wherein shall be guaranteed and secured to all the people of India justice, social, economic and political; equality of status, of opportunity, and before the law; freedom of thought, expression, belief, faith worship, vocation, association and action, subject to law and public morality...” This, as we know, was the backbone of our Constitution’s stirring Preamble.

Two years and eight months later, on August 11, 1949, as the question of citizenship (which finds place in Part II of the Constitution) was being debated, there was a proposal “that every person who is a Hindu or a Sikh and is not a citizen of any other State shall be entitled to be a citizen of India”. This was flatly opposed by Nehru who asserted, “You cannot have rules for Hindus, for Muslims or for Christians only. It is absurd on the face of it…”

Responding to the charges of “appeasement” — and we should remember that this was at a time when the horrors of Partition were still searingly fresh in everyone’s mind — he said, “One word has been thrown about a lot. I should like to register my strong protest against that word… it is that this Government goes in for a policy of appeasement, appeasement of Pakistan, appeasement of Muslims, appeasement of this and that… Do the honourable Members who talk of appeasement think that some kind of rule should be applied when dealing with these people which has nothing to do with justice or equity? I want a clear answer to that. If so, I would only plead for appeasement.”

He would go on to add, “Another word is thrown up a good deal, this secular State business… It is brought in at every conceivable step and at every conceivable stage… it is brought in all contexts, as if by saying that we are a secular State we have done something amazingly generous, given something out of our pocket to the rest of the world, something which we ought not to have done, so on and so forth. We have only done something which every country does except a very few misguided and backward countries in the world. Let us not refer to that word in the sense that we have done something very mighty.”

But don’t take my word for it. Read, and judge, for yourself.