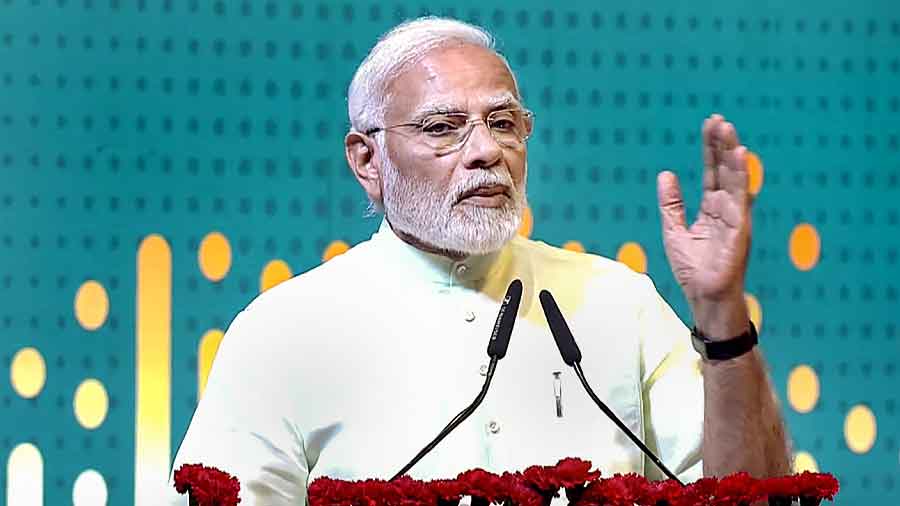 Numbers do not lie. But without context, they can certainly mislead. On Tuesday, the prime minister, Narendra Modi, asked Central government ministries and departments to recruit 10 lakh employees over the next 18 months in a move that government spokespersons were quick to tout as a bold new job creation initiative. In reality, it is the latest instance of Mr Modi’s administration shifting goalposts on employment and represents an acknowledgement by the Centre of its unambiguous failure to deliver on the economy. Eight years ago, when Mr Modi was first seeking the prime minister’s chair, he had promised two crore jobs every year. Instead, his move to ban high-value currency notes overnight in 2016 — panned by most major economists — took away 15 lakh jobs, even as cash remains king in the Indian economy. By the time the finance minister, Nirmala Sitharaman, unveiled her latest budget earlier this year, the government had dramatically scaled down its ambitions. Ms Sitharaman promised 60 lakh jobs in five years, or just 6 per cent of the job creation that the prime minister spoke of in 2014. Mr Modi’s latest employment pitch offers even fewer jobs than what the finance minister announced five months ago.

Most of the recruitment sought by Mr Modi will only help cover for the roughly nine lakh vacancies existing in the government rather than create new jobs. The government’s new Agnipath scheme — under which young Indians will be hired for four years to serve in the military — is another attempt on the part of Mr Modi’s dispensation to create temporary employment. The prospects are worrying. India’s unemployment rate continues to hover over 7 per cent — even though millions have given up looking for jobs, with the country’s labour participation rate falling from 46 per cent in 2017 to 40 per cent at present. That includes some 21 million women who have left the workforce over the past five years (India’s unemployment rate only considers those actively seeking jobs). With an estimated 12 million Indians reaching working age every year, the country stands on the precipice of an unemployment epidemic. Mass joblessness is a recipe for social disquiet. Unless that is what Mr Modi’s administration wants, it needs to step up and demonstrate that its economic strategy involves more than empty promises and self-inflicted wounds. India deserves better.