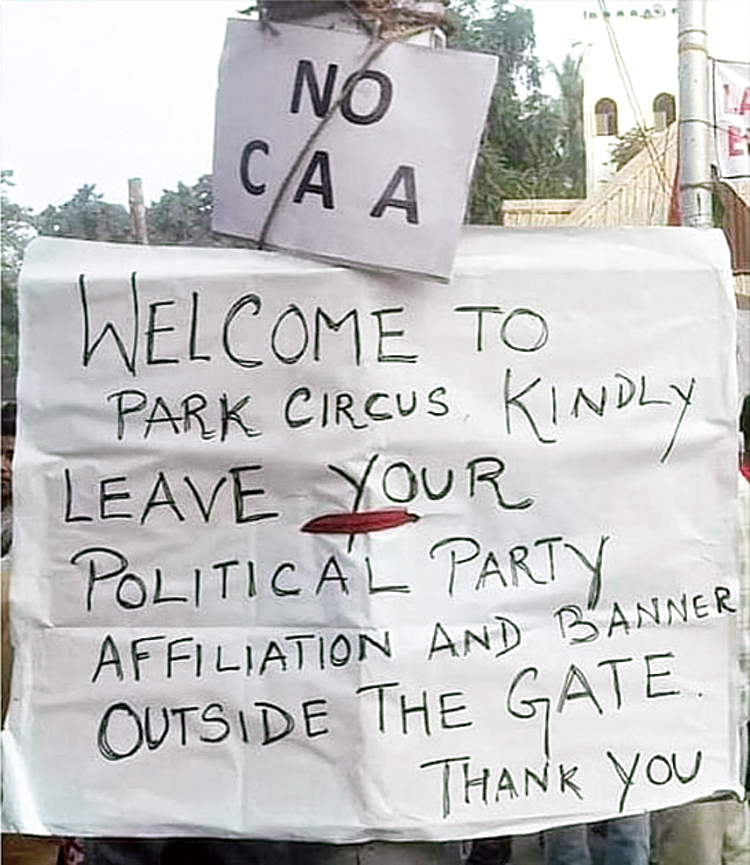 During his recent visit to Calcutta, the Congress leader, P. Chidambaram, appealed to all political parties opposed to the Citizenship (Amendment) Act, the National Register of Citizens and the National Population Register to come together on one platform. While visiting the protest at Park Circus Maidan, he said that the fight today was to “save the Constitution of India” and that he was proud that “the students are fighting for intangible things like constitutional integrity, constitutional morality”.

The irony is that it is only the students and ordinary citizens who are today interested in fighting for such intangible things as constitutional integrity and constitutional morality. Political parties, almost without exception, including Chidambaram’s own, are busy counting the tangibles of electoral gain. The electoral ally of the Congress in West Bengal is a nominally Left party that had no compunction in mobilizing votes for the Bharatiya Janata Party in the general elections last May, with its cynical “ebar Ram pore baam (Ram this time, the Left next time)” slogan.

Quite tellingly then, a placard outside the Park Circus Maidan read: “No CAA. Welcome to Park Circus. Kindly leave your political party affiliation and the banner outside the gate.” Political parties, however, have yet to gauge the depth of distrust earned by them over the years.

This widespread sentiment arises out of years of experience of betrayal by parties who enter spontaneous popular movements to appropriate them, or simply split them if they cannot control them. Parenthetically, one might do well to remember that this sentiment against political parties is today global, seen as much in the Arab Spring and the Occupy Wall Street protests as it was in evidence in the earlier movements in Greece and Spain that spawned new formations like Syriza and Podemos.

The divide is stark and tragic. When the struggle is on and masses of people are out on the streets, they work more or less unitedly, if they can manage to keep political parties out. Come elections and the picture changes. However, citizens and students don’t fight the elections and have to depend yet again on parties that have endlessly betrayed them. If the regime has to be defeated, a strong electoral coalition has to be in place where energies released by the movement/s can find political expression. But that is precisely what looks so remote and improbable today.

There is no doubt that the defence of the Constitution is the key issue today, for it is not just a legal document but literally, the charter of modern India. It was a “social contract”, hammered out by diverse and even opposed political forces that sat together in the Constituent Assembly for the first time.

If that be the case, why is it so difficult for the parties to put aside their petty ideological differences even for a brief while, in order to foreground the struggle for the constitutional vision?

This myopic party-centrism afflicts all parties today. In West Bengal, for instance, where the three main non-BJP parties are opposed to the CAA-NRC-NPR package and broadly share the constitutional vision, why does this possibility of a common platform look so elusive?

For all the problems that Mamata Banerjee and her Trinamul Congress have, they did at least propose conducting a joint fight with the Congress and the Communist Party of India (Marxist), as recently as in June 2019. But the Congress and CPI(M) responses to her proposal were bewildering and displayed their myopia and non-seriousness. The Congress leader of Opposition in the assembly, Abdul Mannan, responded by accusing the TMC of being “no less than the BJP” and indeed, being no different from it. The CPI(M) leader, Sujan Chakraborty, whose party actually made possible BJP’s impressive victory in the Lok Sabha elections, did one better. “First she must accept her mistake before the people [in assisting the growth of the BJP] and only then we will consider what we should do,” he said, adding that the TMC “is a sinking ship.”

Within six months of these arrogant statements, in the end of November, not only did the TMC win all three seats in the by-elections that were held in the state (Kharagpur, Kaliaganj and Karimpur), but the combined vote of the CPI(M) and the Congress also fell drastically in comparison to the 2016 assembly elections. In Kaliaganj, their combined vote came down by 90,000 votes while in Kharagpur it came down by 40,000. So much for TMC’s “sinking ship”.

However, electoral performance is not really the question here. The point, rather, is that neither Mannan nor Chakraborty seemed to be able to appreciate the urgent need for a common platform. For Chakraborty, whose own party has not yet expressed remorse — let alone offer an apology — for Marichjhanpi or Nandigram, his precondition for making common cause with the TMC was that it should offer an apology for “being responsible for the rise of the BJP” — a matter on which too his party surpassed all others.

Truth be told, the leftist antipathy towards Mamata Banerjee is not really political but draws on deep bhadralok revulsion against someone who does not belong to their class — not to speak of the deep-seated misogyny that has so often been reflected in Left leaders’ statements. Remember the seven-time CPI(M) Arambagh MP, Anil Basu, asking in a public meeting — after making references to Sonagachhi — “from which b****r did she [Banerjee] get Rs 24 crore to fund Trinamool Congress’s poll expenses?” Or his statement during the Singur agitation, that if he had his way, he would drag her by her hair and dump her at her Kalighat house. And just last year, the party’s state secretary, Surjyakanta Misra, publicly made fun of Banerjee’s English pronunciation.

However, let us set all that aside for the moment. It is true that Banerjee’s own behaviour in the past has smacked of authoritarianism and there are not a few continuing problems with her government. But does Abdul Mannan really want us to believe that the BJP and the TMC are the same? Is that the way to fight for “constitutional integrity” that his party leader spoke of?

The fact of the matter is that Mamata Banerjee is no better or worse than any of the regional leaders running one-person shows in different states of India. The inability to appreciate the fact that the struggle against a proto-fascist dispensation today is taking place on a very complex terrain — perhaps it always does — leads very simply to the abdication of that struggle. Are we surprised then that the BJP has been on a winning spree these past few years?

Party bureaucracy, said the Italian Marxist, Antonio Gramsci, is the most dangerously hidebound and conservative force that can lead the party, in moments of crisis to be “voided of its social content”, to become “mummified and anachronistic” — historico-political documents of a past whose outdated terminology it continues to repeat. One can understand that the West Bengal CPI(M) leadership neither has the time nor the inclination to read Gramsci but it is not difficult to see its steady slide down the road to mummification.

A turbulent future: The battle for Bengal is likely to get murkier