Mr Modi’s critics have alleged, not without reason, that his meeting the Pope was yet another attempt on the part of the prime minister to reap political dividends 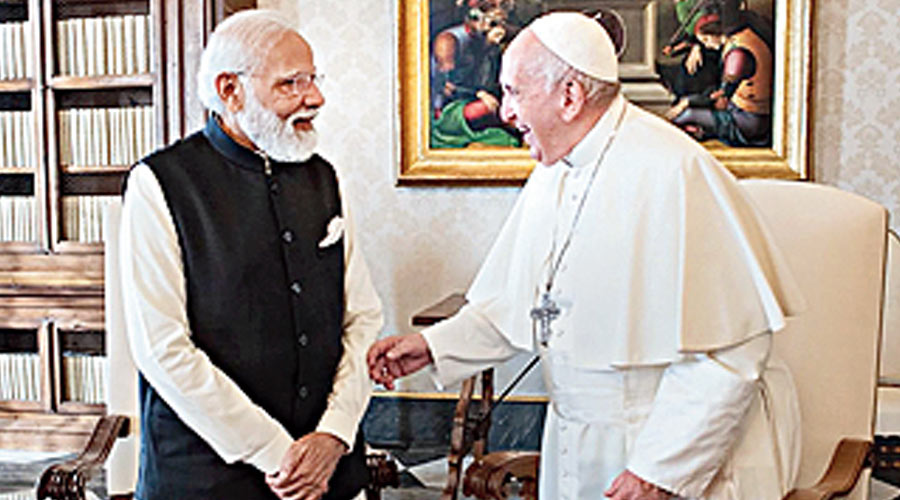 Politics is rich in symbolism. But not every symbolic act is meaningful. Consider Narendra Modi’s warm meeting with the Pope during which the prime minister invited the papal head to India. Mr Modi’s critics have alleged, not without reason, that this was yet another attempt on the part of the prime minister to reap political dividends. Perhaps the timing of the visit bares the real intentions. The Bharatiya Janata Party is headed for an electoral battle in Goa where Catholics account for a quarter of the electorate. Mr Modi’s party will not be able to brush away the allegation of optics for another reason: India’s religious minorities, including Christians, have borne the brunt of an orchestrated attack at the hands of an ascendant culture of majoritarianism on Mr Modi’s watch. In Chhattisgarh, a state with a sizable Christian population, attacks on pastors by using the convenient bogey of conversion are not unheard of. Karnataka recently ordered a survey on churches, fuelling anxieties of persecution of Christians. A cynical BJP has, however, been mindful of mellowing its rhetoric of conversion in other states where it needs the support of Christians for political reasons. In Kerala, the party has been accused of being receptive to the concerns of the community to wean it away from its political rivals. In India’s Northeast, where the BJP is in power in several states, either on its own or as part of alliances, targeted assaults on Christians are rare. This new front opened by engineered hatred in other parts of the country has led to a precipitous decline in India’s performance on the religious freedom index: the United States Commission on International Religious Freedom put India on the list of ‘countries of particular concern’ on account of violations of religious freedoms. Significantly, among the gifts that Mr Modi received from the pontiff was a document on human fraternity: there can be no ambiguity about the symbolic import of this act.

Mr Modi’s task is clear. As the elected leader of a pluralist republic, he must direct his government towards soothing the frayed nerves of India’s religious minorities and work for their material and social assimilation. The principal hindrance he faces is the ideological mooring of the sangh parivar. Ironically, Mr Modi commands the mandate to transcend narrow ideological imperatives and forge a new coalition of bonhomie among India’s faiths.