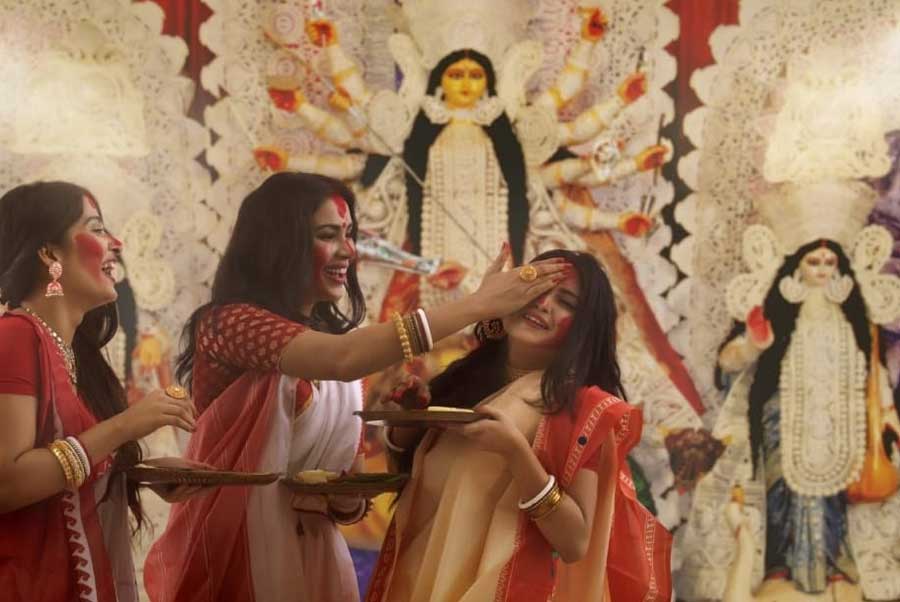 At a time when religion divides rather than unites, the placing of Calcutta’s Durga Puja festival on Unesco’s Intangible Cultural Heritage of Humanity list is perhaps the most telling indicator of its uniqueness. The Unesco’s comments on the festival — the first in Asia to make it to the heritage list — lay stress on its inclusiveness, remarking on the way the divides of class, religion and ethnicity collapse as spectators wander among installations. The Durga Puja festival represents a deeply enriching convergence that Unesco has acknowledged. It links tradition with living faith, religion with art, worship with community participation, meticulously followed rituals with an atmosphere of joy, sharing and giving. Traditional craftspeople and performers are indispensable to the festival, but so are new artists and designers. The deity is worshipped in public pavilions as well as in many old family homes. Even the community’s relationship with the deity embraces a range of responses and emotions. She is a powerful mother figure, fighting evil. Simultaneously, the towering deity is also a daughter on her yearly visit to her earthly natal home with her family. So the saviour of gods and human beings becomes a beloved member of the family, whose arrival is celebrated and departure mourned. These paradoxical combinations manifest the vibrancy of a living heritage that draws into it many kinds of engagement and participation.

Through its recognition by an international body, the Durga Puja may have offered a silent answer to those who use religion as a divisive weapon. It is encouraging that the prime minister has expressed his happiness at the recognition. Perhaps he will hold up Durga Puja’s inclusiveness as an example to his party since it tends to see religion in sharply drawn black and white segments. The champions of Hindutva and majoritarianism are rigidly focused on the superiority and privilege of one religion alone, so their idea of worship has little to do with accommodation, sharing and the festive spirit, or with art and creativity. But it is the latter that has won a victory by being honoured internationally; the irony is inescapable.

To be on Unesco’s list for intangible cultural heritage would also make the city’s Durga Puja a pilgrimage for tourists. Calcutta is overrun with visitors during the Pujas anyway; now there may be a spurt of tourists from other parts of India and abroad. The deity might be overseeing a certain amount of economic regeneration through tourism. She already provides many traditional artists — idol-makers and drummers for instance — with most of their annual income. The spirit of generosity and openness at the heart of the festival has turned it into not just a symbol of inclusiveness but also of positive and humane values. There could be no better route to the economic regeneration that West Bengal needs. There is a lesson here, perhaps more than one. Are there takers for it?