The precarity of print 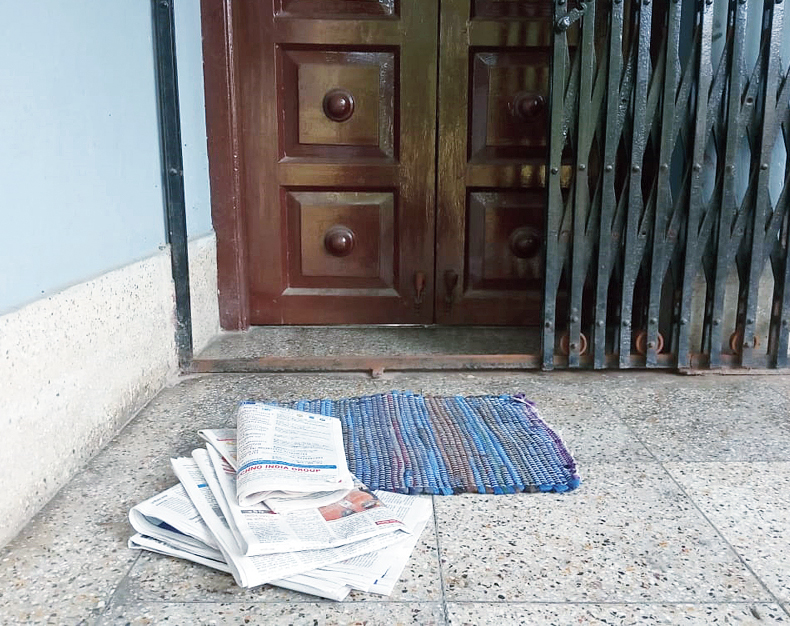 The newspaper business in India had a growing viability problem even before this. This was even more so abroad. Now print sounds increasingly frantic about survival everywhere. Will the virus hasten its demise?
(Pic: The Telegraph)
The Telegraph   |   Published 26.04.20, 09:07 PM

Newspapers have been accused of many things before, but never of being a potential virus carrier. As Covid-19 unleashed itself across the globe, dailies turned untouchable last month shortly after the prime minister announced a countrywide lockdown. Copies were barred from delivery by Mumbai’s housing societies and by resident welfare associations in Delhi and other cities. Until in Mumbai newspaper editions were forced to suspend publication for a few days.

The newspaper business in India had a growing viability problem even before this. This was even more so abroad. Now print sounds increasingly frantic about survival everywhere. Will the virus hasten its demise?

It has certainly brought home its utter precarity. A WhatsApp video of a matron in Kerala picking up the day’s newspaper with a pair of tongs and then ironing it to rid it of potential viruses may have been made for a lark, but it brought home the cruel reality of what infection paranoia was doing to the doorstep delivery of the day’s news. Advertising was promptly withdrawn from titles across the board when distribution became uncertain. And a string of never-happened-before-s followed.

Indian dailies began running full-page advertisements, even TV ads, explaining that they were a product untouched by human hands. The Times of India interviewed top lawyers on how blocking newspaper delivery is a legal offence. For a while, The Economic Times took to carrying text below its masthead on how the paper was safe to hold and read. Both papers carried a campaign on political leaders posing with their product. The desperation was showing.

As was the damage. In both dailies, as in other dailies across the country, there were no jacket advertisements, or half pagers or quarter pagers. This was unprecedented in many decades, and nothing short of a calamity could have brought this on. But then a pandemic is just that.

Faced with the prospect of their journalism going unread, The Indian Express took to sending presumed readers the link to an e-version of the newspaper every morning before 6 am. Across newspapers, weekly and daily supplements disappeared into the main paper even as pages shrank overall.

Journalists and other media workers became vulnerable overnight. They found their salaries abruptly cut across outlets in various media, with announcements of ‘restructured’ salaries surfacing through April. Some lost their jobs at indecently short notice, even at profitable newspapers. The Hindustan Times management said it was losing Rs 3.5 crore a day and spelt out for its employees changes in salary structure. So did the Times Group while also announcing a nominal salary cut.

The word, furloughing, suddenly entered the media business vocabulary here and abroad. As inindefinite leave without pay. In India, this was announced by the online portal, Quint, and in the United Kingdom by the Financial Times, The Guardian, The Telegraph and Daily Mirror among others. How much damage will be done by the time newspapers are allowed into homes again? And how many homes will that be?

The paranoia has not confined been to India. At the end of March, Iran’s Coronavirus Combat Taskforce issued a decree suspending all newspaper printing, delivery and distribution, saying this was needed to reduce the spread of the Covid-19 pandemic. Turkey and the UK reported community fears too.

Infection paranoia is only part of the story. Over the years, newspapers have taken to organizing events in a big way as a source of revenue. The lockdown has put paid to that, and one does not know for how long. Can online events ever get the same kind of sponsorship revenue?

Sonia Gandhi touched a raw nerve when she wrote to the prime minister suggesting that the government put a hold on all media advertising for two years and use the savings to alleviate the economic and social impacts of Covid-19. The statement drew angry responses from media bodies and prompted The Indian Express to call it spectacularly bad timing and a complete misunderstanding of news as a public good.

The crisis has been a long time in the making with the transition to digital consumption of news extracting its price over the years. On the one hand, Google fattened on searches for original news content provided by newspaper journalism, while on the other the print media depended too much on advertising revenues.

For several decades now, Indians have been incentivized to pay as little as possible for their media. The market leader pushed the cover price of newspapers down decades ago, and used the strategy to enter new markets, forcing regional market leaders to cut prices as well, thereby increasing dependence on advertising which it could afford to do given its complete dominance of the advertising market.

So how is the print media to be saved now? The solution is threefold. With some help from governments, a lot of help from those who have fattened at the expense of print — internet giants like Google and Facebook — and with the assiduous building of an online subscriber base, something in which Indian newspapers lag far behind their Western counterparts. But even then, given the advertisement rates print commands compared to digital, online subscriptions alone will not be enough to sustain today’s leading titles.

Indian newspapers have not achieved the double act that leading international brands abroad have. the Financial Times, Washington Post, The Guardian and The New York Times have built their online subscriptions to the point that they have more subscribers online than for their print editions. Our papers have only begun to go pay online in the last few years. This is mainly because in India it is always a challenge to make readers pay.

Meanwhile, newspaper readership is dropping and editions of papers have been shutting down. In October 2019, the Zee Group’s English daily, DNA, shut down its print editions. The Deccan Chronicle group has been periodically shutting down editions of this paper and The Asian Age over the past few years.

The future looks grim. If industrial production is down, advertising will shrink drastically. And if online habits acquired during the lockdown stick for consumers, not all newspaper readers may return to print.

If governments and the internet behemoths are to be part of the viability solution for newspapers, this is what it could look like. The Australian Competition and Consumer Commission is considering rules to make internet platforms pay fair compensation for the journalistic content siphoned off from news media. This echoes efforts by the French regulator to make Google comply with Europe’s new digital copyright law. Media groups and the news agency, Agence France-Presse, lodged a complaint with the competition regulator last November. France became the first country to ratify the EU law. The National Union of Journalists in the UK is calling for a 6 per cent tax on the revenues of tech companies such as Google and Facebook which will help rescue the journalism industry. The Indian Newspaper Society is calling for a level playing field between foreign digital giants and domestic Indian newspapers without spelling out how.

Meanwhile, both Google and Facebook are trying to don the rescuer’s mantle by announcing 100 million dollar investments to support the news industry at a time of the havoc caused by the pandemic. That is a charming Rs 760 crore from each for the entire world’s journalism industry. An editorial in a national daily pegged the online ad revenues Google cornered from India in 2018-19 to be Rs 11,500 crore.

The Jagran Group has said Nai Dunia had not suspended publication in Indore, as mentioned in the opinion article, headlined 'Drying Ink', in The Telegraph on Monday. The newspaper is being regularly published and distributed, the group said. We apologise for the mistake. Accordingly, the line about the Jagaran Group publication has been removed from the online version of the article.