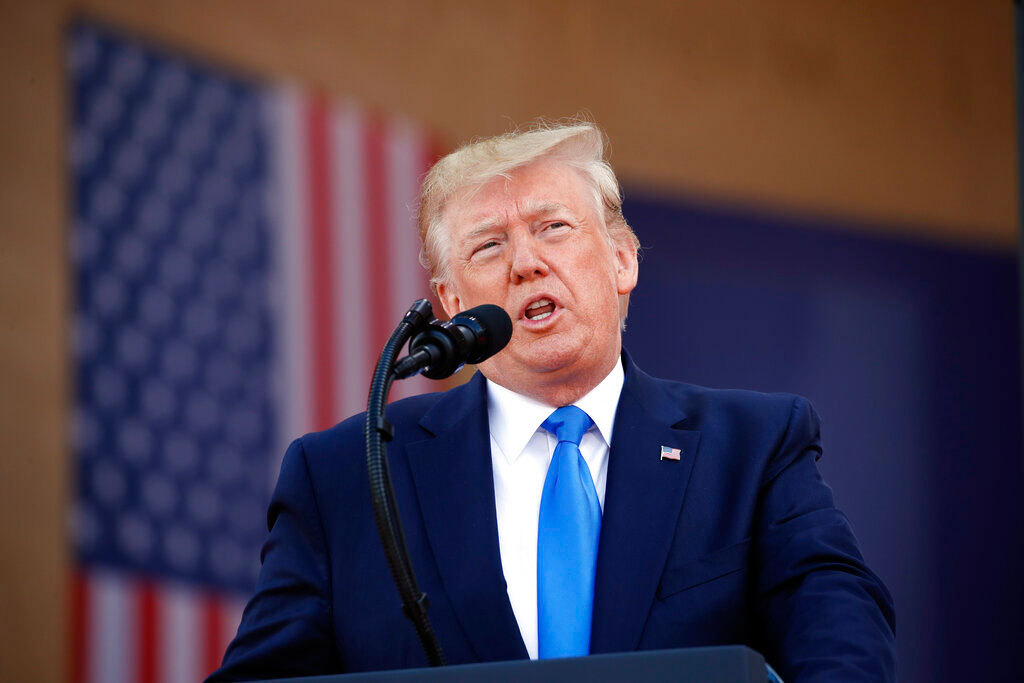 Donald Trump speaks during a ceremony to commemorate the 75th anniversary of D-Day at The Normandy American Cemetery on Thursday. This may be just the beginning of his deliberate strategy to force India to open its markets to American goods and services
Picture by AP
The Editorial Board   |     |   Published 08.06.19, 02:40 AM

Prime Minister Narendra Modi received a double whammy on the day he took his oath of office at the start of his second term. First, the Central Statistics Office reported that growth in the fourth quarter of 2018-19 (January-March) had tumbled to 5.8 per cent, the slowest in two years. A couple of hours later, the president of the United States of America, Donald Trump, issued a proclamation terminating India’s designation as a beneficiary nation under the Generalized System of Preferences, immediately ending zero-duty access for $6.3 billion of Indian goods.

India is unlikely to resort to a tit-for-tat retaliation against a formidable trade partner and a major geopolitical ally. It will, in all probability, swallow the insult and become resigned to the loss of GSP tariff exemptions worth $260 million. The commerce and industry minister, Piyush Goyal, has already tried to play down the significance of the trade blow by claiming that the loss of benefits worked out to less than 1 per cent of India’s overall exports worth $51.4 billion to the US in 2018. But Mr Goyal needs to realize that this is just the beginning of Mr Trump’s deliberate strategy to force India to open its markets to American goods and services.

But a bigger problem lurks. Mr Trump is now all set to attack the World Trade Organization’s Most Favoured Nation rule, which bars member nations from discriminating against trading partners. Under the rule, a WTO member must offer the benefit of the lowest import tariff it levies on a product equally to every nation. It may, however, charge higher non-reciprocal tariffs if it applies these rates to every one.

In his State of the Union address this year, Mr Trump urged the US Congress to pass a US Reciprocal Trade Act, which would authorize the president to drag any country to the negotiating table that applies higher non-reciprocal tariffs. Peter Navarro, the assistant to Mr Trump and director of the Office of Trade and Manufacturing Policy, wrote an article in the Wall Street Journal that spelt out how the White House viewed this problem —“If you live in a low-tariff country like the US, you should oppose an international trading system that helps institutionalize non-reciprocal tariffs.” Mr Navarro illustrated the problem by alluding to the fact that the American MFN tariff on automobiles was 2.5 per cent while India’s tariff was 10 times higher. “In 2017,” he wrote, “the US exported 638 autos to India while the US has become India’s third largest auto export market.”

Data sourced from India’s department of commerce refute Mr Navarro’s claim. Motor car exports to the US in 2017-18 totalled $653.68 million by value, a little over 9 per cent of its total car exports worth $7,107.34 million. But such arguments will not change Mr Trump’s resolve to weed out trade regulations that he believes are inimical to the US’s interests. If Mr Trump has his way with the Congress, nations like India will have serious reasons to worry.

US threat on retaliatory tariffs