Could the gift of a fresh sapling rejuvenate the friendship between the US and France? 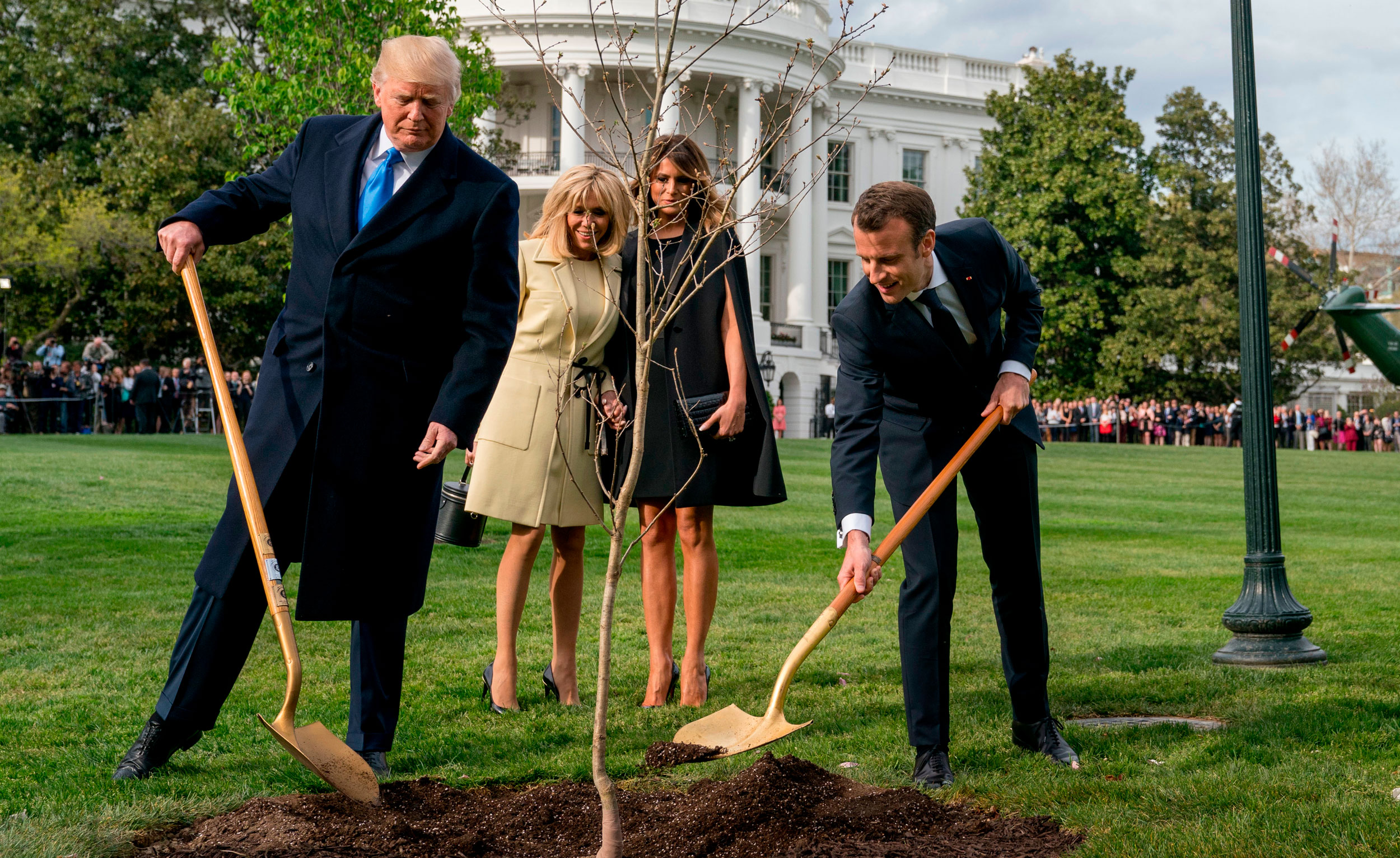 In this April 23, 2018, file photo, US President Donald Trump (left) and French President Emmanuel Macron (right), with Brigitte Macron and Melania Trump (second and third from left, respectively), plant an oak tree on the South Lawn of the White House in Washington DC.
(AP)
The Telegraph   |   Published 09.07.19, 12:05 PM

Sir — The young oak tree that the French president, Emmanuel Macron, gave the president of the United States of America, Donald Trump, last year as a symbol of the friendship between the two nations has died. The two heads of state had even been photographed planting the tree together with golden shovels, and Macron had said that it would remind the White House of the “ties that bind” France and the US. It is telling that the tree died in quarantine — apparently, all living organisms that enter the US have to go through it — at a time when relations between the nations have been worsening on account of disagreements on trade, environment and the Iran nuclear deal. Might the gift of a fresh sapling rejuvenate the friendship?

Sir — The president of the Cricket Association of Bengal, as well as the representatives of the eastern region at the Board of Control for Cricket in India must turn their attention to the India A squad of 15 cricketers that has been selected to visit the West Indies to play five unofficial one-day internationals and three Tests from July 11. It is appalling that no cricketer from Bengal has been included in the team. This, in spite of the fact that the Bengal batsman, Abhimanyu Easwaran, has been performing fantastically in the Ranji Trophy as well as in other tournaments. He deserved a place in the team.

As the head of the CAB, Ganguly should say something about the non-inclusion of Easwaran in the visiting team. Given his position of authority, he should ensure the junior players from the eastern region are given adequate opportunities to be selected for unofficial matches.

Sir — Abhimanyu Easwaran’s exclusion from the India A team being sent on the West Indies A tour is puzzling. While he had been picked for the Sri Lanka A series, the truth is that a number of players were selected to play on both tours — Shubman Gill and Ishan Kishan are two such examples — so it must be asked why a player like Easwaran was not chosen for the Windies tour. It is even more bewildering given that the squad to be sent to the West Indies has been revised; Kishan, Anmolpreet Singh and Ruturaj Gaikwad were added to the line-up to replace an injured Prithvi Shaw and because Rishabh Pant and Mayank Agarwal were sent to England for the ongoing World Cup tournament. Why wasn’t Easwaran selected for the revised team? He has, after all, been a regular member of the India A team since 2017. During the Ranji Trophy season last year, he made 861 runs at an average of 95.66, and also scored three centuries and as many fifties.

The bias among selectors against cricketers from the eastern region, especially Bengal — even those who have proved their worth on several occasions — is no secret. Even Sourav Ganguly — who is not only one of the best players India has ever produced but also one of the two best captains to have ever led the men’s cricket team — faced the famed ‘Bengal bias’ throughout his career. Will the likes of Easwaran — who has the potential to be a valuable addition to India’s Test team in the future — also have to grapple with such prejudice in this day and age? One hopes that a player as promising and talented as him will not have to deal with such complications.

Sir — Shruti Sonal’s article, “An effective mode of dissent” (July 3), was intriguing. She writes about an alternative way of showing disagreement: through literature, specifically science fiction. The latter often explores social and political structures which are usually characterized by dehumanization, dictatorial governments, environmental disasters or other factors associated with a cataclysmic decline in society. Dystopian realities in sci-fi allow authors to explore a wide range of problems in politics, economics, family, religion and identity, many of which involve class prejudice and violence.

In recent years, there has been a surge in the sci-fi and fantasy genres, especially in young adult fiction. It is to be noted that young people, in particular, seem to be fascinated with literary themes that push them to think about ongoing problems in the world as well as what the future holds. The rise of demagoguery, ultra-nationalism, provincialism, megalomania, distrust of traditional sources of news, the clamping down on free thought and the lack of respect for human rights — especially women’s rights — have all led to the popularity of dystopian science fiction in India as well as across the world.

Indian sci-fi is yet to become truly popular, but a few notable works, such as Generation 14 by Priya Sarukkai Chabria, Domechild by Shiv Ramdas, The Many Lives of Ruby Iyer by Laxmi Hariharan, Leila by Prayaag Akbar and, of course, The Diary of a Space Traveller by the beloved Satyajit Ray should be read by anyone interested in good science fiction. The time is right for authors to contribute to the growth of Indian sci-fi and also criticize the rise of dictatorial politics in India.

Sir — Science fiction as a literary genre is proving to have the potential to influence public opinion and dissent, as Shruti Sonal has suggested in her article. One hopes that Indian sci-fi authors will soon make a name for themselves on a global scale. There is no dearth of talent in the nation, and we now need dissent in newer modes more than ever.