The story of global hunger 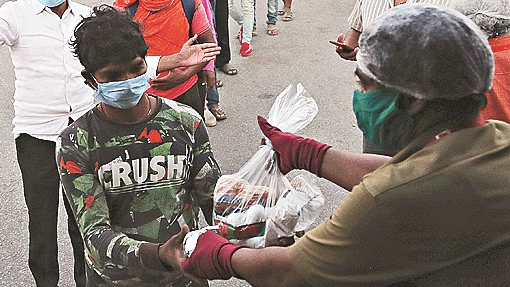 With no end to the pandemic in sight, people have now begun to worry about the different kinds of economic and social effects of Covid-19 more than about the disease itself. An impending food crisis is one major consequence that is causing concern across the globe. The World Food Programme of the United Nations has warned that there could be famines of biblical proportions in some parts of the world. India, too, will be affected since South Asia and sub-Saharan Africa are two regions that house the world’s largest number of undernourished and malnourished people. It is ironic that there is no aggregate shortage of food in the world. The distribution and access to food, however, cause severe distress. In a terribly unequal world, increasing levels of wastage have been accompanied by food scarcity and hunger.

Hunger is something more than starvation. It is characterized by multiple features among which the shortage in the quantity of food is one dimension. A shortage implies a deficit in the minimum calories intake required by an average person. There are other dimensions as well. Health experts emphasize the need for a balanced diet in which there are optimum amounts of protein, fat and carbohydrates along with minerals and vitamins. An absence of this balance causes malnutrition that can have adverse long-term consequences similar to undernutrition when there is a shortage in total availability. Experts also point to the importance of the human body to be able to absorb a food for proper nutrition of the body. Importance is placed on the micronutrients that the human body requires to absorb the food it ingests. Any of these inadequacies can cause long-term damage in terms of brain development, chronic diseases, stunting and wasting through poor bodily development like height and weight. These impacts persist throughout a person’s lifetime.

Hunger has remained familiar to the world despite the increased production of food, better agrarian technology, improvements in trade and communications, and a reduction in the number of people living in absolute poverty. There are growing concerns about the shortage of food induced by climate change given its effects on the productivity of land. Crop failures due to erratic weather like floods and droughts are another concern. There is wastage too. Rich countries of the world waste enormous amounts of food through large inventories in supermarkets and as a result of excessive purchase by consumers. The surplus food ends up in garbage dumps. In poor countries like India, there is also food wastage because the nation does not have enough storage facilities that can preserve perishable food like fruits and vegetables. According to the Food and Agricultural Organization of the United Nations, the global extent of food wastage annually is of the order of 1.3 billion tonnes, which is approximately 33 per cent of the total food produced for human consumption. This quantum is valued at USD 2.6 trillion, and is deemed sufficient to feed about 815 million hungry people. In India, the wastage, according to government sources, is estimated to be around 16-20 per cent of all produce, especially fruits and vegetables and oilseeds. Set against these kinds of wastage, there are parts of the world where many children go to sleep hungry because they get unbalanced or inadequate diets. This has been the crux of the story behind global hunger.

Then the pandemic arrived. Firstly, it seriously disrupted supply chains that reduced the flow of food from the farm and the dairy to the marketplace. Secondly, affluent people who could afford food started to buy in panic; this exacerbated shortages. Thirdly, all of a sudden, a large number of people found their jobs gone, or incomes slashed. This meant that their ability to access food was jeopardized. They had to cut back on quantity as well as quality. Finally, with supply-induced shortages, food prices have begun to rise across the globe. Food inflation is at abnormally high rates from China to the United States of America, from India to Brazil. Those who still have some income left started eating less; those with no income at all had to depend on private charity or on the government to provide food. As the pandemic gets prolonged, the ability of charities and governments to provide support will get weaker. International aid, already lower than last year, will begin to taper off rapidly. There might be a spike in hunger and starvation. According to some experts, the number of deaths from poverty and hunger could begin to surpass the deaths from Covid-19.

According to the World Bank, more than 100 million people have already slipped into extreme poverty since March 2020. The WFP estimates that half-a-billion people might slide back into poverty by the time the pandemic ends. International trade normally moves enough maize, wheat, rice and soybeans to feed 2.8 billion people every year. That supply chain is also broken. There is a shortage of migrant workers in certain geographies. The United Kingdom expects to throw out a third of its harvest because of the lack of workers during the harvesting season. The US, in spite of Donald Trump’s paranoia about immigration, has actually eased visa restrictions for temporary help during the harvesting season. Other countries have imposed export restrictions on food grains in an effort to ensure sufficient domestic availability. Out of the 20 worst-hit countries, 17 are in sub-Saharan Africa where the cost of a basic meal has increased to 186 per cent of an average worker’s daily wage. According to Oxfam, 55 million people in 7 countries are facing famine-like conditions. In India, there are now 38,000 relief camps where 16 million are fed on a daily basis. It is estimated that 196 million people in India suffer from food insecurity. In the US, for the first time since the Great Depression, there are food banks where many people are going for the first time in their lives. 2020 had been a remarkably bad year in many ways. The pandemic, the economic collapse, backtracking on climate-change policies, freak weather patterns, forest fires and pests like the locust swarm — all of these do not bode well for the near future. This year may turn out to be a slow-motion replay of 2020.

There is no aggregate shortage yet. It is all about reaching food to the right people at the right time and at the right price. However, policymakers across the world appear callous, turning more authoritarian and less democratic. They do not care too much about the weakest. Weakness is something to be abhorred and denounced. Yet hunger affects the weakest most severely. On the other side of food insecurity, one can see an added dose of food wastage by people who can afford food. There are new types of processed food being tried out. Additional food is stockpiled by online orders, new recipes are tried and exchanged, and many people in this economic class complain about putting on weight from eating too much during the pandemic-induced restrictions on physical movements. That is the story of roughly the top 10 per cent. The majority of the remaining 90 per cent remain on the edge of hunger. A few grow fat and rich even as millions of lives are wasted.