The Trinamul MP's sartorial tribute to the 19th century intellectual was short-lived, perhaps because Delhi is too cold 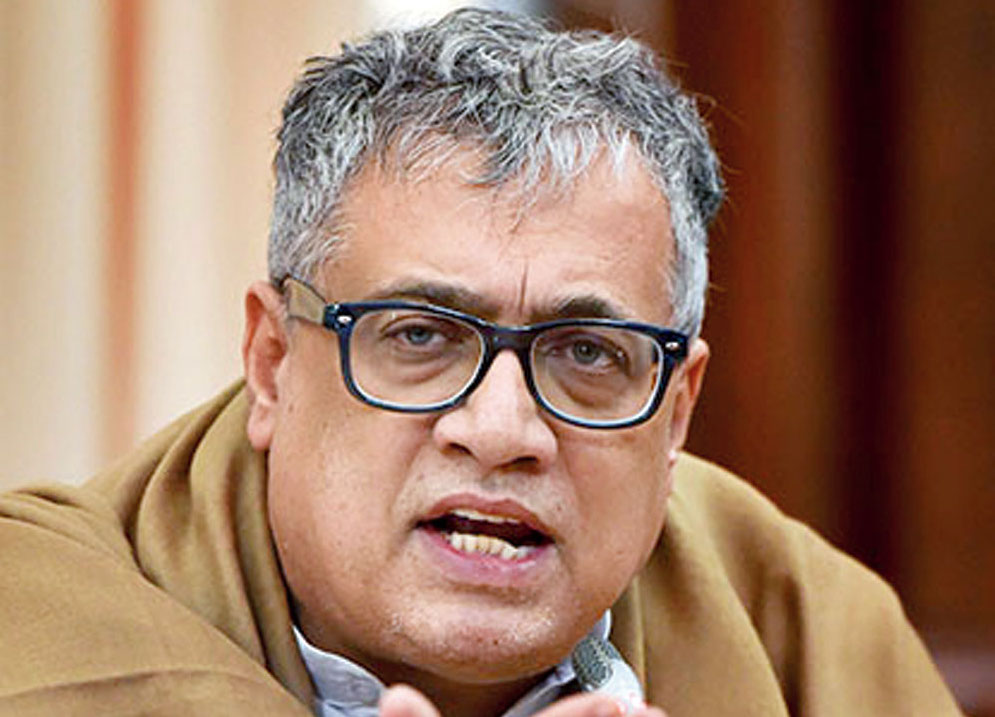 Chairman of the parliamentary standing committee on Civil Aviation and Trinamul MP Derek O'Brien at a press conference in New Delhi on Thursday, December 27, 2018
PTI Photo / Manvender Vashist
The Telegraph   |     |   Published 06.01.19, 05:30 AM

The veteran actor, Kader Khan, who passed away on January 1 in a hospital in Canada, used to miss the Bollywood icon, Amitabh Bachchan, the most. This revelation comes from Khan’s son, Sarfaraz, who has been quoted as saying, “I want Bachchan saab to know that my father spoke about him till the end.” Industry sources claim that Big B and Khan reportedly fell out when many directors and producers pressurized Khan to address the mega-star as “sir jee”. Khan is said to have declined. When the news of his death became public, the senior Bachchan promptly took to Twitter to pay tribute to the actor. He wrote, “Kadar Khan [sic] passes away.. sad depressing news.. my prayers and condolences.. a brilliant stage artist a most compassionate and accomplished talent on film.. a writer of eminence; in most of my very successful films.. a delightful company.. and a mathematician!!”

A search is on for a Rajya Sabha berth for the good doctor. Will it be Punjab or Tamil Nadu that will accommodate the former prime minister, Manmohan Singh, in the Upper House? Singh’s term will on June 14. Given the numbers game, the Congress is unable to give him another term from Assam. His home state, Punjab, is an option only if Ambika Soni agrees to resign from the Rajya Sabha and contest for the Lok Sabha from the Anandpur Sahib seat. Since the Congress is the ruling party in Punjab, the by-election can give Singh a seat in Parliament.

There is also a buzz around him making it from Tamil Nadu, given the growing bonhomie between the Congress president, Rahul Gandhi, and the DMK chief, MK Stalin. The DMK, with the Congress, can win three out of the six seats up for grabs from the state this year. Singh will now be hoping that the mahagathbandhan works.

The marathon speech by Nirmala Sitharaman in Parliament was arguably among the longest in recent memory. Making it even more memorable, however, was her use of the word, ‘yaar’, directed at other parliamentarians in an attempt at faux camaraderie whenever they interrupted her. The word was not included in the uncorrected verbatim debates posted on the Lok Sabha website, since such usages are not commonly heard in parliamentary proceedings. But could the choice of expression have been apt, given the pace at which the BJP is losing friends?

Lutyens’ Delhi has been witnessing an unending run of lunches and social gatherings organized by politicians across party lines. The season’s first lunch was hosted by the Congress leader, Praful Patel, at which a galaxy of Opposition leaders — in fact, the entire mahagathbandhan — was present for a photo opportunity, including the Samajwadi Party, Bahujan Samaj Party, Dravida Munnetra Kazhagam, All India Anna Dravida Munnetra Kazhagam, National Conference, the PDP, the Left and the Trinamul Congress. But lunch diplomacy is evidently not the forte of the Opposition alone: the following day, the Union railways minister, Piyush Goyal, demonstrated the strength of the ruling National Democratic Alliance — both in terms of attendees and the lavishness of the lunch spread. The newly-appointed spokesperson for the Bharatiya Janata Party, Rajiv Pratap Rudy, also played a perfect host. Have their new year’s resolutions regarding eating right, in moderation, and cutting out sugar become redundant within a week?

Politicians have long claimed to be influenced by icons — and now, the Trinamul Congress parliamentarian Derek O’Brien seems to have taken that trend rather seriously. This is evident in the new look he opted for midway into the winter session of Parliament. Starting from the last Friday of December right through the first week of this month, O’Brien came to Parliament in what was billed by Bengalis as the ‘Ishwar Chandra Vidyasagar look’ — in a kurta pyjama ensemble with a large shawl draped around the shoulders. By this past Friday, however, he was back to his old ways and style, making many people wonder whether the legendary chilly weather of Delhi had got to him as well.

‘Kadaknath’ — or ‘the firm one’ — is a delicious variety of chicken known, interestingly, for its aphrodisiac properties. Even more interestingly, it has been recommended for the captain of the Indian cricket team, Virat Kohli. The skipper has reportedly stopped eating his favourite grilled chicken on account of the danger of high cholesterol and fat. So the Krishi Vigyan Kendra, based in Jhabua in Madhya Pradesh, has written to the Board of Control for Cricket in India to allow Kohli, who is currently on tour in Australia and whose team has been dominating the ongoing Test series, to switch to Kadaknath chicken, which is apparently low on both fat and cholesterol.

This is not all. In comparison to ‘regular’ chicken, the Kadaknath variety boasts of 25 per cent more protein and iron content. Locally known as ‘kali masi’, the fowl is distinguishable by its black plumage and flesh, and is also considered to be a bird of sacred value — it is offered as a sacrifice to the deity after Diwali. The tribal people are also known to use the blood of the Kadaknath chicken in the treatment of a number of chronic diseases. And, most significantly, every young groom in Jhabua-Alirajpur is kept on a diet of Kadaknath for over a fortnight, as the tribal people firmly believe that this particular variety of chicken has the properties required to make the initial days of marital life blissful. Perhaps Anushka Sharma will have yet another reason to smile now?