Advertisement
Home / Opinion / Democracy: All for one

Democracy: All for one 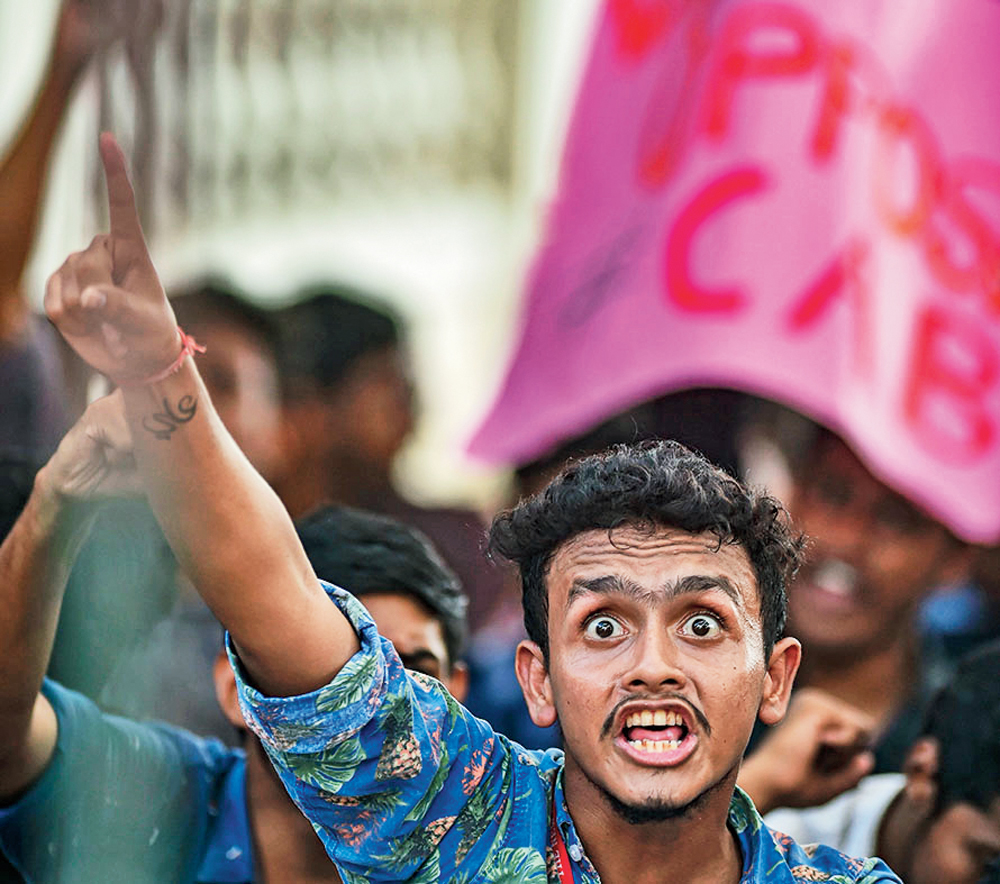 The demonstrations have been in defence of the Constitution and the values upon which modern India has been founded, in particular the principle of equal rights for all
(PTI photo)
Prabhat Patnaik   |   Published 02.01.20, 06:46 PM

The last few days have been a real eye-opener, not just for the Bharatiya Janata Party but even for its critics. The protests against the Citizenship (Amendment) Act have been so massive in scale and so spontaneous in character that they have taken everyone by surprise. True, they have had the support of several political parties, but neither these parties nor their front organizations nor even well-known non-party political activists have been instrumental in organizing them.

Students and youth have been in the forefront of these protests; and in that sense they constitute a continuation of student movements that have been going on for some time now in campuses around the country. But they are not confined to students alone. The demonstrators have belonged to all walks of life and all religions even though Muslims, especially young Muslim women, have been extremely active in this resistance, breaking the stasis that had for long characterized that community. Narendra Modi’s jibe about their being recognizable from their dress, suggesting that the resistance is merely a Muslim affair (even if it had been, one must ask: so what?), is not just crude; it represents a complete misreading.

The demonstrations have been in defence of the Constitution and the values upon which modern India has been founded, in particular the principle of equal rights for all. Indeed this has been its most exhilarating feature, the fact that the students and youth of the country have risen in such large numbers to defend the foundational values of modern India against the Hindutva onslaught. With such commitment on their part,one feels assured that the future of the nation is safe, no matter what its current travails.

This upsurge is particularly important at present. The Narendra Modi government had hollowed out, one by one, all the pillars of democracy over the last five years, and mass intervention remained the last bulwark against a fascistic imposition of authoritarianism; this intervention has now occurred. Having got a majority in the Lok Sabha and hence obtained access to State power, it had unashamedly used this power to enfeeble every single pillar of democracy. It had acquired control over the Rajya Sabha where it did not have a majority through a combination of stick-and-carrot methods. Unleashing the Central Bureau of Investigation, income tax authorities and the Enforcement Directorate against regional party leaders helped it get their support on crucial bills. There was also the offer of Central funds to cash-strapped states run by regional parties for their legislative support; and, as a last resort, there was the threat of destabilizing their governments by purchasing their MLAs. All these measures ensured its complete control over both Houses of the Central legislature.

Similar methods were reportedly used against the judiciary to browbeat it if not into submission, then at least into being accommodative towards the executive. And the bulk of the media, often called the fourth pillar of democracy, not only fell in line but even became, for all practical purposes, the torch-bearers of Hindutva because of the threat inter alia of being cut off from government advertisements; the few intrepid souls in the media who dared to speak the truth were harassed no end.

Having got virtually complete control over the State in this manner, and having used the UAPA, sedition laws and other such repressive laws against individual activists to imprison or terrorize them, the Modi government thought it was sitting pretty; it was confident that it could now embark with impunity on its project of undermining the Constitution in the interests of Hindutva.

The abrogation of Article 370 and the bifurcation of that state into two Union territories was a ‘dress rehearsal’. The fact that the move hardly raised much opposition in the rest of India despite the entire political leadership of that state being put behind bars and the people being put to extreme hardship, including being kept incommunicado, confirmed the government’s belief in its own invulnerability no matter what it did. It became emboldened to legislate the CAA, which was a key step in the journey towards a Hindu rashtra. The mass resistance this move has generated, therefore, has come as a bolt from the blue for the government.

It has beaten a temporary retreat, claiming that it had never mooted the National Register of Citizens, and that the National Population Register has nothing to do with the NRC. Both these are false claims; but the fact that it is making these claims shows its temporary retreat on the NRC. Indeed, several state governments, including those of parties that had voted for the CAA, have also pledged themselves against it.

This retreat, however, is only temporary: the BJP’s world-view does not admit making enduring concessions to the popular mood. It has now embarked upon the task of discrediting, and thereby forcibly preventing, mass demonstrations of the sort we have seen of late. This would, it feels, remove the last bulwark against its march towards a Hindu rashtra.

The argument, echoed even by General Bipin Rawat who had no business to do so, is not just that such demonstrations have caused much damage to property, but that the demonstrators are generally mischief-mongers, or that mischief-mongering is part and parcel of such demonstrations, from which it follows that these demonstrations must be curbed by the police, through brutal means if necessary. The brutality at Jamia is sought to be justified by the government on the grounds that a bus was torched by demonstrators, even though the torching happened a kilometre away from Jamia and no student was involved in the incident. The brutality at AMU is sought to be justified on the grounds that hooligans had entered the campus. The logic is: if damage to property is to be curbed, then such demonstrations must be curbed through police brutality. The people, in short, must not be allowed to express their dissent even collectively.

Apart from the element of reification it involves, namely that the people’s freedom must be made subservient to the task of preserving property, this argument is also reminiscent of colonial times, of the logic that the colonial rulers had used against the anti-colonial struggle. Any mass demonstration can be infiltrated by agents provocateurs planted by the police itself whose subversive acts would then be used to unleash police brutality, which would then, it is hoped, discourage participation in such demonstrations. The BJP state governments have been working on this plan. It is not surprising that deaths through police action have all occurred in BJP-ruled states. It is also not surprising that Delhi, whose police is controlled by the Centre, saw horrible brutality against Jamia’s students. The students and the youth of the country, however, have shown that they cannot be cowed down so easily.

The recent developments bring out two important points about democracy. First, democracy requires not just decision-making on the majority rule, not just “government by discussion” (as Amartya Sen, quoting Walter Bagehot, reminds us), not just a set of universal and justiciable political and social rights; it requires all these, but above all it requires collective action for its defence. Second, individual rights can be enjoyed only through collective action. The collective alone can be the means of ensuring the individual’s freedom.

Born in India, will die in India

The pathology of protest