The hijab controversy is not about an item of clothing 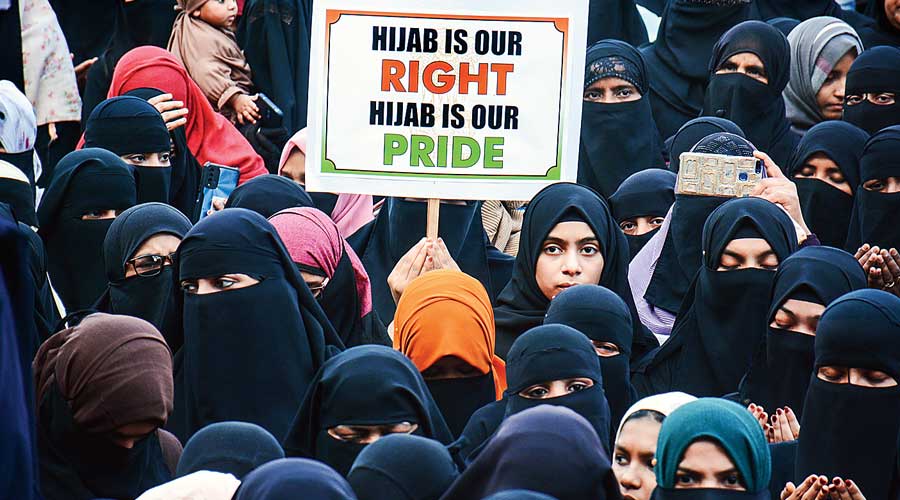 ‘Sabka Saath, Sabka Vikas, Sabka Vishwas’ is one of the Bharatiya Janata Party’s many evocative election slogans. Vishwas is an interesting word. It could mean ‘trust’, or it could also mean ‘belief’. ‘Sab’ is ordinarily a less interesting word, simply meaning ‘everyone’. But in Karnataka, with several school and college girls being prohibited from wearing the hijab in educational institutions, it is clear that ‘sab’, at least for the Karnataka government, does not include these Muslim women. ‘Vishwas’, too, clearly excludes their belief that their religion requires them to wear the hijab or simply their freedom to dress as they please.

Like most controversial issues, this one too has ended up in court. Unfortunately, the counsels in the Karnataka High Court appear to have made the issue more complex than it actually is. Article 25 of the Constitution is clear — subject to public order, morality, health and other fundamental rights, every person has the freedom to profess, practise and propagate his/her religion. Now, a large number of Muslim women are of the firm belief that to practise Islam, they are required to wear the hijab. Several others hold a different view. The correct theological interpretation should not be the concern of the courts.

That may have been the case if wearing the hijab affected public order, morality, health or someone else’s fundamental right. But making such a claim is absurd — just because the girl in class sitting next to me is dressed marginally differently cannot make a difference to either public order, or my health or ability to freely participate in class. This is what the Supreme Court famously held in the Jehovah’s Witnesses case, where the right of three school children to remain silent when the national anthem was sung was upheld. Although these religious tenets, which prohibited singing of the national anthem, may have been odd, the children could choose not to sing since they did not affect anyone else.

More recently, the Supreme Court has more expressly held in the famous right to privacy case that the freedom of speech and expression together with the right to life and personal liberty means that the State cannot interfere with an individual’s right to choose which food to consume, what dress to wear, which faith to espouse. The Karnataka High Court, like every other high court, is bound to follow this precedent and ensure that the words of the Supreme Court do not become hollow promises.

So far, its interim order does not evoke much confidence. In a surprising order, the court has stated that while the petitions challenging the hijab ban are pending, all students, regardless of their faith, are restrained from wearing saffron shawls, scarfs, hijab, religious flags or the like within the classroom. This is a familiar levelling down fallacy — just because the saffron shawl (which certainly cannot suddenly be elevated from sartorial choice to religious diktat) is also prohibited does not make the interim prohibition of the hijab justified. Judges are well-trained to refrain from passing an interim order that puts a pause on the operation of any law. In this case, let alone a law, the judges seem to have unwittingly ended up preventing the operation of a fundamental right in the Constitution itself, not only of Muslim girl students but others as well in terms of what they can or cannot wear. Though well-intentioned, this is poor adjudication, a form of panchayati justice that does not behove a high court.

Of course, this is not to say that educational institutions cannot prescribe a dress code. After all, the very word, ‘uniform’, in schools evokes a sense that the only identity in class is that of a student. But the purpose of having carefully drafted provisions on fundamental rights is to strike a balance between interests such as uniformity and autonomy of choice. Colleges and schools across the country continue to permit Muslim students to wear hijabs, Sikh students to wear pagdis, Brahmin students to wear the sacred thread. Taking it further, the country has seen topi-clad prime ministers, saffron-robed chief ministers, bhoomi pujans at inaugurations of educational institutions. Our national emblem, too, was originally a religious totem. A public display of religion in government functions, offices and symbols is commonplace in India. As is the freedom of public office-holders to dress as they please.

The controversy over the hijab ban is nothing but an importing of an alien European construct of laïcité, excluding religion from the public sphere. Traditional Hindutva theory, despite being based on the European idea of a homogenous nation espoused by V.D. Savarkar, is, however, ambivalent on the question of the hijab in the public sphere. In the “Constitution of the Hindusthan Free State” endorsed by the Hindu Mahasabha with Savarkar as president, minorities were given the freedom of conscience and the freedom to practise and profess their own religion. More interestingly, Section 7(xv) of this Constitution categorically provided “There shall be no state religion for the Hindusthan Free State or for any of its provinces.” The edifice of the Hindutva Constitution would not have been legally infringed if a Muslim girl wore a hijab to college. What is playing out in Karnataka is a brand of majoritarian politics that is derived from Savarkar’s anti-Muslim invective rather than any well-articulated constitutional alternative.

There is a fourth prong to the BJP’s election adage coined more recently by the prime minister —  ‘Sabka Saath, Sabka Vikas, Sabka Vishwas, Sabka Prayas’. The government of Karnataka must make a greater prayas to understand the Constitution of India, as it is bound to do, or the Hindutva Constitution, as it would perhaps like to. If it fails, the high court must set it right. After all, the hijab controversy is not simply about an item of clothing. It is about the nation that is emerging, trampling over something far more fundamental than the Constitution — its underlying values of fraternity and civility.