The pay phone is now relegated to history 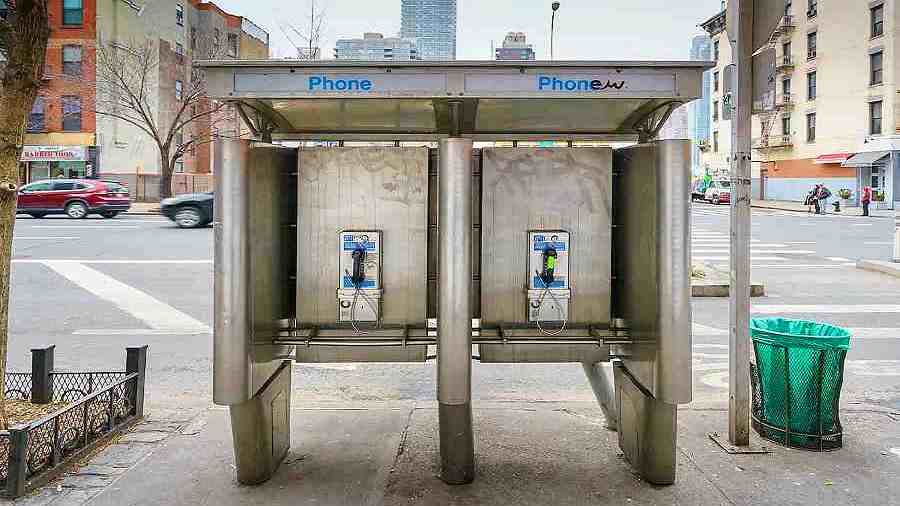 When I was two, a man from Calcutta Telephones apparently came to our small flat in Lake Gardens, attached an instrument, and went away. In those years of the early 1960s, there was a long wait after you applied for a phone line, and if you did get one it was like you’d won the lottery; we did win the lottery — almost. We were out when the phone fellow came and the youngster working in the house couldn’t give the right name, so the man went away, leaving behind the instrument without activating the line; for the longest time, my parents tried to get the phone working but to no avail; finally, someone came and took away the instrument as well; and that was that for the next fifteen years. Looking back, I can only surmise that in those early days of the under-table economy, my parents were too obtuse to part with the twenty rupees that would have brought us a functioning telephone.

As it was, we moved to a nearby flat where the landlady had a phone. So making or receiving a call meant going up the stairs and dealing with the old mashima; if she was awake and in a good mood, fine; if not, then too bad, we remained incommunicado. Finally, the ghost of the dud instrument from 1962 was exorcised when we got a phone in 1977. Just out of school, I worked that bakelite thing to within an inch of its life before I left to study in the United States of America.

One of the first things that struck me when I landed in New York was the number of public telephones. ‘Ubiquitous’ didn’t begin to cover it; this was a parallel population of pay phones that occupied sidewalks and public spaces almost in competition with the citizens they were there to serve. I only spent a couple of days in New York with family friends before heading to my college in Vermont. Leaving the house to look around the city, I got some advice. ‘You’ve got some change on you? If you get lost, just call and we’ll tell you how to get back home.’ Central Manhattan is one of the most idiot-proof places in the world in terms of getting lost but it can be pretty daunting to a new arrival; walking or taking the subway, I kept locating the nearest payphone and this made me feel secure.

As I spent time in my college, I got to know many students of anarchic bent and I learnt a lot about Ma Bell — as the monopoly phone company was nicknamed— and about its payphones. I hadn’t noticed that each pay phone had individual numbers. This was useful in many ways. For instance, besides ‘collect calls’, there was also the option of calling the operator and asking him/her to charge a domestic long-distance or international call to your home number(from which you were currently away). The operator would then call your home to ask whoever answered for clearance. If no one answered, the operator would put you through anyway, to Los Angeles, Tokyo, Athens or wherever. Now the reason you couldn’t give the number of a payphone for this was that most payphone numbers began with three digits that immediately identified them as public telephones. However, this wasn’t true of all payphones in continental US— apparently quite a few payphones, especially down south in rural Alabama, Louisiana, Mississippi and so on, still had numbers beginning with the normal area code of the state, making it impossible to differentiate them from a private number. If you had such a number handy, you could charge your calls to it and the cost would be borne by Ma Belland written off against the billions it was making in profit. Every now and then, a list of such numbers would arrive from somewhere and be passed around among the students. Though I was sorely tempted, I myself never used this trick. However, that didn’t stop me from watching in envy as other students spent hours talking to their folks in Caracas or their girlfriends in Oregon.

I realise now that I was witnessing an America at the end of a particular period of unimaginable plenitude that had begun after the Second World War. The reason why Ma Bell’s operators could trust people to pay their charges was that most of them — rich, middling or poor — did pay their phone bills, creating gargantuan rolling profits for a company with a 70-year-long monopoly on the telephone communications of the richest country the world has known. The petty larceny of students and poor people who needed to game the system was particle-miniscule when put next to the mountains of money Bell was raking in every day. That particular thirty-year period, roughly between 1950and 1980, was also marked by the equally enormous profits of the big American oil, energy and armament companies but there was some sense of the wealth being spread, if not to the poorest of the black, hispanic and white underclasses, then at least to that shifting economic band labelled ‘American middle-class’.

In short order, Jimmy Carter would be ejected from the US presidency to be replaced by Ronald Reagan, signalling the start of the forty-year period in which the grand larceny of the big US companies would go off the scales, with the government riding shotgun to protect this obscene, ill-gotten wealth.

Once I moved to New York after my idyllic college period in Vermont, I realised that not all payphones were equal. In the run-down area of East Village/Alphabet City where I found dwellings, there was nary a payphone that worked— most of them had been rigged to trap the dimes and quarters people might try and put in them. Furthermore, after dark, it was inadvisable to stop at a booth and try to use one; pulling out whatever small change you may be carrying was a surefire way of attracting muggers. Desperate people in this part of the richest city on the planet were just not connected to the plenty and the security that so much of America still took for granted.

Recently, I read that the last of New York City’s payphones have been uprooted and taken off to the dump yard. With the departure of what you could call an iconic artefact of NYC’s cityscape goes a century-long history of communication and disconnection, replaced now by newer exchanges of inequality, newer networks of isolation.