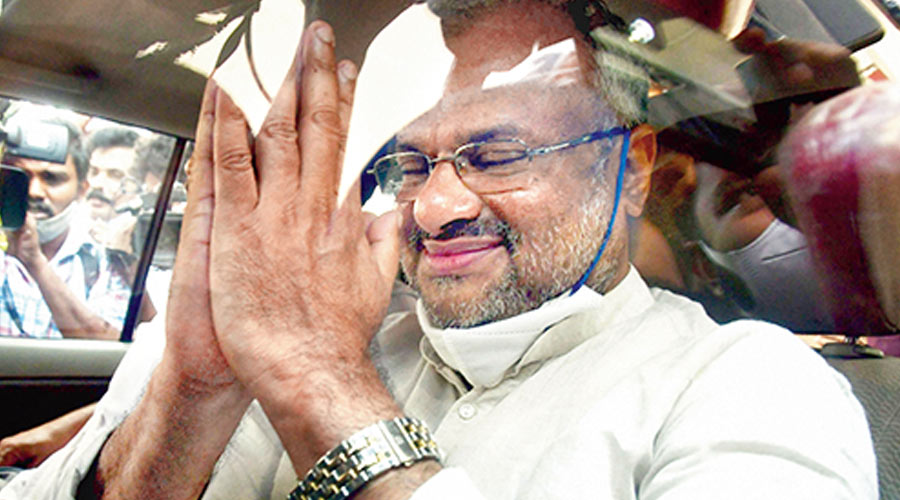 Bishop Franco Mulakkal folds his hands in gratitude as he leaves after the Additional District & Sessions Court acquitted him in a rape case, in Kottayam, Friday, Jan 14, 2022.
PTI Photo
M.G. Radhakrishnan   |   Published 24.01.22, 12:01 AM

Kerala has the country’s best record in most conventional yardsticks of women’s empowerment. Yet, its patriarchal underbelly is now a topic of wide debate. Recently, the Anupama Chandran case in which a baby born out of wedlock was taken away forcibly from its mother by her family aided by the ruling Communist Party of India (Marxist) had exposed the misogyny lurking even within progressive movements. Now, two high-profile rape cases rocking Kerala for some years have laid bare the forces of patriarchy entrenched in the judiciary, religion, police, and cinema.

If a bishop was the accused in one case, Dileep, a prominent film star, is among the accused in the other. The complainant against the bishop was a senior nun and, against Dileep, a renowned actor. On January 14, the sessions court, Kottayam division, acquitted Fr. Franco Mulakkal (57), the  bishop of the Jalandhar diocese of the Kerala-based Syro-Malabar Catholic Church, of all charges in the four-year-old rape case. The nun, who is in her late forties, had accused the bishop of raping her 13 times inside her convent between 2014 and 2016. According to critics, the verdict set back by decades the progress India has made in rape prevention since the landmark Mathura case of 1972 and the Nirbhaya incident in 2012. A campaign continues in which thousands of handwritten letters are pouring in for the nun expressing solidarity from activists and celebrities and protesting her ‘re-traumatization’ and ‘Second Rape’.

Mulakkal was the first Indian prelate to be arrested in a rape case, and the SMCC is the second-largest Eastern Catholic Church with five million members. The nun who complained against him was the Mother Superior at the St. Francis Mission Convent at Kuravilangad, Kottayam district. She belonged to the Missionaries of Jesus, a congregation under the SMCC’s Jalandhar diocese. Mulakkal, bishop from 2013 until his arrest in 2018, used to stay at the convent during his visits to Kerala. The prosecution listed in detail the alleged sexual assault on the nun on February 2014.

The nun had first complained against the bishop to her congregation’s Mother General in 2017. Subsequently, she complained to the SMCC heads and also the Pope at the Vatican, seeking intervention. As there was little progress on the complaints, five young nuns from the convent came out publicly against the bishop. From then, the case made headlines and triggered a public outcry. In June 2018, the nun filed a police complaint. An agitation was launched by the dissident nuns backed by various activist groups. The nuns complained of attempts to threaten and bribe them to withdraw the case. A senior nun who supported the agitation was expelled from her Franciscan Clarist Congregation. Two months after the case was registered, police arrested Mulakkal on September 22, and he stepped down as bishop. Bailed within a month, Mulakkal flew back to Jalandhar, where a grand welcome by the diocese awaited him. The police took five more months to file the chargesheet.

Two subsequent incidents made things murkier. A week after Mulakkal was on bail, Fr. Kuriakose Kattuthara (62), who worked with him at the diocese and deposed against him in the rape case, was found dead inside Jalandhar’s St. Mary’s Church. In March 2019, the Punjab police recovered Rs 9.66 crore of allegedly unaccounted money from the Jalandhar home of Fr. Antony Madassery, a close aide of Mulakkal.

The judge, G. Gopakumar, of the trial court found no evidence against the bishop in the rape case. He said the nun did not prove a “sterling witness” because her testimony had contradictions and the depositions of other witnesses were unreliable. The court also surmised that the survivor’s torn hymen could be on account of her alleged sexual antecedents. According to the court, the nun didn’t mention rape or penile penetration in her complaints to her superiors but said only that the bishop forced her to share bed. “This is a case in which the grain and chaff are inextricably mixed up. It is impossible to separate the grain from the chaff. There are exaggerations and embellishments in the version of the victim,” the judge said.

According to observers, the court showed neither sensitivity to the complainant nor factored in the fiduciary relationship between the bishop and the nun. Neither did it consider the fundamental changes in the rape laws with the introduction of the Criminal Law (Amendment) Act, 2013. Brought in the aftermath of the Nirbhaya incident, they redefined rape, the concept of consent, and the importance of the survivor’s testimony.

The prosecution is considering appealing against the verdict. Police investigators have expressed shock, women‘s groups have protested, and the nuns who defended their colleague lamented that money and power subverted justice. “Very rarely does a survivor come forward to file a rape case. And that too, a nun. This verdict will have a chilling effect,” said S. Harishankar, the additional inspector general of police who headed the investigation. “We will fight till our sister gets justice,” said Sister Anupama, who led the few nuns against the bishop. P. Satheedevi and Rekha Sharma, the chairpersons of the Kerala Women’s Commission and the National Commission for Women respectively, expressed shock at the verdict.

Mulakkal held in court that the nun’s accusations were baseless and made to avenge him for removing her from the post of Mother Superior for misconduct in February 2017.

The five-year-old case related to Dileep returned to the headlines after the state crime branch filed a new suit against him for allegedly conspiring to kill some of its members. The original case is related to a female actor’s abduction and sexual assault inside a moving vehicle in 2017. Dileep, eighth among the ten accused, allegedly had some personal scores to settle with the female actor. During the case, about 20 witnesses, including prominent actors, retracted their statements to favour Dileep, who enjoyed support from the film industry’s male-dominated organizations. Arrested in July 2017, Dileep spent 85 days in prison before getting bail. Earlier, a request by the survivor and the state government to change the woman judge — whom they accused of bias — of the special trial court that hears the case was rejected by the high court and the Supreme Court. The case is pending trial even after the apex court directed in November 2019 to complete it within six months.

Meanwhile, the state government not releasing the report of the three-member committee headed by K. Hema, former justice, Kerala High Court, has raised protests. The committee, constituted after the demand made by Women in Cinema Collective formed in the aftermath of the Dileep case, studied the exploitation and discrimination women faced in the industry. The committee submitted its report around two years ago to the government, which has entrusted it with another committee for further steps. It is believed to contain shocking revelations involving industry bigwigs.

The survivors in both cases remain professionally marginalized and socially invisibilized. Mulakkal has returned to Jalandhar to resume work as bishop. Dileep’s latest comedy flick is a hit.