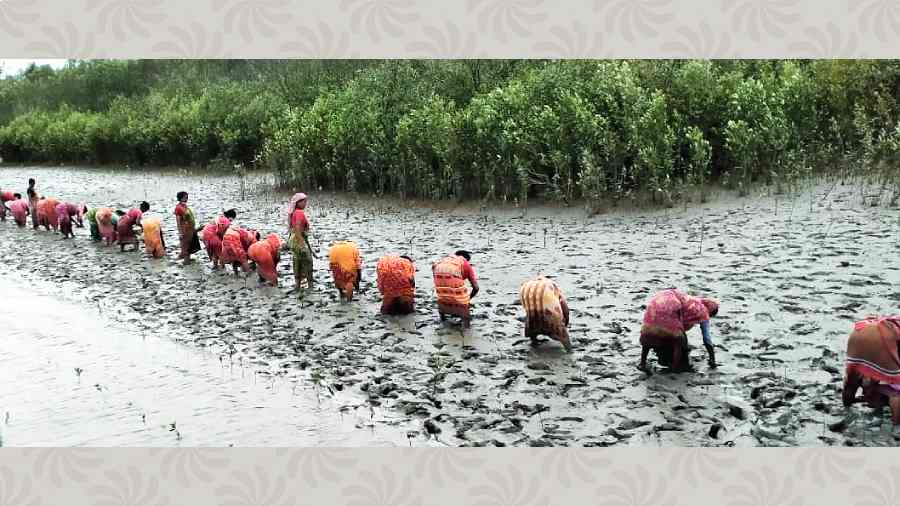 Within weeks of the Indian Ocean tsunami on December 26, 2004, I was watching video clips of the event at the Choto Mollakhali market in the Gosaba block of South 24 Parganas. One message that came through these video clips was that fewer lives were lost where there was coastal vegetation. This positively changed the perception of mangroves in the Sunderbans much more than the National Mangroves Committee, constituted in 1976 to advise the government, did.

In 2005, Estuarine, Coastal and Shelf Science published an article by Kathiresan Kandasamy and Rajendran Narayanasamy reiterating the importance of coastal mangrove vegetation in protecting lives and assets from the fury of tsunamis. On the basis of the differences in per capita mortality between 18 coastal hamlets in Tamil Nadu, they found that mortality was significantly associated with elevation, distance from sea and the area of coastal frontage given to vegetation. This article influenced policy and practice immensely — it has 907 citations on Google Scholar.

In the following year, the journal published another article by Kerr et al. criticising the potential mitigating effect of mangroves on tsunami damage. While they did not argue against vegetation in general mitigating damage from tsunamis, their contention was that overstating the protective capacity of vegetation may lead to a false sense of security and, eventually, when the next wave comes, to a lack of trust in science. This second article has only 143 citations. While mangroves are well-accepted as bio-shields against extreme events, expecting them to provide protection from large tsunamis does seem unrealistic. Nevertheless, mangroves provide rural coastal communities with many valuable goods and services and their protection should be wholeheartedly supported.

Cyclone Amphan made landfall in the Sunderbans on May 20, 2020 as a very severe cyclonic storm. The India Meteorological Department has seven categories for storms based on 3-minutes’ average sustained wind speed — aVSCS is fifth in ascending order. Yet, The Guardian called Amphan a “Super-cyclone”.A super cyclonic storm is seventh in the IMD category. Amphan had intensified into SuCS around noon of May 18 and maintained the intensity for about 24 hours but weakened thereafter. The damage potential of a SuCS with average wind speeds of over 221km/h is not the same as that of VSCS with wind speeds of118-165 km/h. Whose purpose does such overstating of hazardous events serve?

On World EnvironmentDay 2020, the chief minister of West Bengal declared that the mangrove forest suffered huge damages due to Amphan and that the forest department would plant five crore trees in the region to rebuild the damaged forests. About a week after Amphan struck, vegetation in the Sunderbansdid appear singed. It could have been osmotic stress caused by soluble salts in the soil. Plants are known to give rapid responses to external induced osmotic stress and enter a ‘shut-down’ mode only to resume after the soluble salts are washed away. With the onset of monsoon, the affected vegetation recovered.

South 24 Parganas accounts for nearly 42 per cent of India’s mangrove cover. The India State of Forest Report 2021 reported increased mangrove cover in the district by 165 hectares in spite of the ‘huge damage’. During 2020-21, Rs 20 crore was spent on mangrove plantation in South 24 Parganas. The driver was the creation of over four lakh workdays for migrants who had returned owing to the Covid-19 lockdown. Overstating has a cascading effect. Overstating the protective capacity of mangroves, the hazard and the extent of damage possibly helped tap into the MGNREGA funds as about 90 per cent of the plantation cost came from the scheme.

Anamitra Anurag Danda is an environmentalist currently serving as Director, Sundarbans Programme, WWF-India and is a Senior Visiting Fellow, ORF