The sticky, noisy cohabitation of life and work during Covid 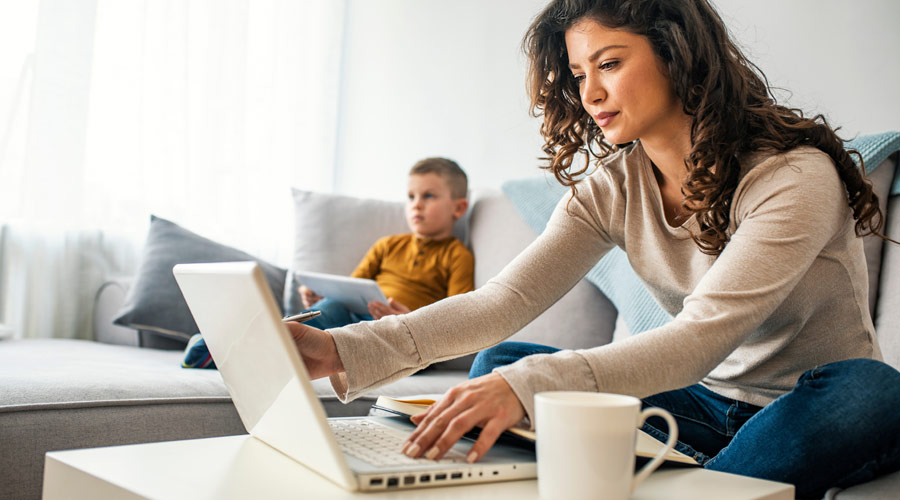 As I write this sentence, a seven year old sits a few feet away from me. His eyes are closed. Through the darkness, he is trying to see the soft sitar music playing before him. Trances don’t happen easily to him. But he’s in school now, waiting for his first session to begin: Circle Time.

As a writer, I’m used to a small and portable office that I can rest on my lap, a screen my field of vision, a keyboard my sphere of action. But it’s now been over 18 months that my son has had his school in a laptop. All of Class II has gone by and, now, much of Class III, too, has sprouted inside a screen. As I write this, the pandemic moves through the uneasy, jagged rhythm of ups and downs around the world and we claw through the nightmare that was this summer in this country. Struck by the pain of our children losing their childhood and aware of the privilege of affording an uninterrupted virtual ‘education’ throughout, many of us wilt before the possible dangers of sending our unvaccinated children back to reopened campuses trying to clean the rust on their gates.

Some of us, possibly most of us who read this newspaper regularly, are among the minority in this country for whose families, the remote classroom, howsoever unsatisfactory, has provided some sad semblance of learning continuity. I also count myself among those with the privilege of space, that I have a separate room in which to work — to write and to teach my own virtual classes — while others in the family carry on with their official and educational lives from their own zones.

But a seven year old is the least mindful of his own private space — certainly a lot less than a teenage child would be — and it is with a longing for intimacy that I make it a practice to sit and work in his room through the mornings. It is, in effect, living in his classroom.

The children talk about dreams. What dreams they have had, what do dreams mean to them. “Saisha just said that dreams are horror,” my son turns to me and says as I try to sharpen a sentence. “That’s a nightmare, isn’t it?” I say, without looking up. “But she said dream.” “Niya said her dream was to become an interior decorator,” he reports. I tell him to pay attention to his class. It’s my way of guarding my private wall of the mind, frail against attacks by a chattering seven year old.

I eavesdrop just in time. “Dreams are things that I wish,” he says when his turn comes. I hear things I’ve told him: dreams are sometimes made of things that you want, or things that you fear. Of course, I did not take Freud’s name. He might have said Fried. I remember my own childhood, when the first mention of Freud had sounded delicious: Freud-fried, a well-fried slip.

It’s not entirely unlike when an undergraduate student includes bits of your own phrase in his presentation, or when a doctoral student quotes your sentences in her thesis. But it’s different too. Not just because the wisdom was shared under a sleep-inducing blanket, but more importantly, it was a raft offered to someone just learning to drift through the waters, not of an academic subject but of life itself.

What about the dreams and nightmares I meet in my virtual office? Concentration marks itself as crucial for any writer, artist, or thinker. Pandemic-era space sharing tells me there is only one thing more important than concentration. Distraction. For those of us lucky enough to hold on to life and livelihood these last couple of years, what have we lost? Life itself: the touch of air on an unmasked face, the joys of recreational travel, the frustrating thrill of a crowded Puja pandal, whiling away time in a pub or a teashop with strangers without fear in our lungs. If you’ve been lucky enough to continue working, work is all you’ve got, because Zoom meetings and classes do not even require climbing the stairs or taking a break in the cafeteria, or smiling at a stranger in the elevator — the odd punctuation marks of living that we now know used to make up a life.

For the writer for whom solitude and isolation are currency, there has been wealth of one kind, but great poverty in the very breath of life. What a gift it is, this clangour of articulated dreams in the middle of the sentence to which I’m trying to give form? “Ma’am, I have put the straws through the bottle,” a small voice asks next to me. “Do these balloons now look like our lungs?” How does one shape a world in one’s head and give it language while a small one erupts a few feet from you and insists on your attention? “It’s raining too heavily and my chhole-sprout will die so what will I show in class?” One shapes, I realize, new worlds with weird delight! I remember telling my university writing class, held in the campus dhaba, that it’s a good idea to take one’s attention off the class discussion from time to time and eavesdrop on the conversation in the next table, for what is the art of writing, indeed, without love for gossip? How do I pull myself away from the tiny heap of gossip next to me as I write?

He jumps on the bed in between classes. I ask him not to mess and crumple his shirt as he has more classes coming up. “Don’t worry, papa,” he tells me, “I’ll ‘touch up my appearance’ on Zoom so nobody will understand anything.”

There is space and the blankness I’m given purely as a function of my gender. The endless queries of domestic life, kitchen and housekeeping decisions that could be resolved there but never are intrude not in my home working space but that of my partner. Domestic distraction and childcare demands punctuate and interrupt the working life of countless female colleagues I know, all around the world, far more than even those men who have tried to deepen their domestic selves during what has been the strangest phase of confinement and disembodiment in our lives. My sharing the seven year old’s classroom is a choice, initiated by the impulse to be a warm, breathing body in what I see for him is a laptop with human voices and silhouettes of human form struggling within. I’ve always wanted to be in his classroom, be a sleeping presence there. What I did not reckon was how it would reshape my working, thinking, writing life.

If and when we can look forward to our home and work spaces to return to their original, disassociated locations, we will take away from this prolonged sickness a warm, sticky, noisy cohabitation of life and work that is likely to realign our work-life relationship forever. Home, office, and school have shared the crumpled bed for too long. Even when they return to their spaces, they won’t quite be the same again, not in our lifetime.