Advertisement
Home / Opinion / Cricket commentators should be heard, not seen

Cricket commentators should be heard, not seen

Remember the time when the faceless but familiar voices were unconcerned with ratings and uninterrupted by commercials? 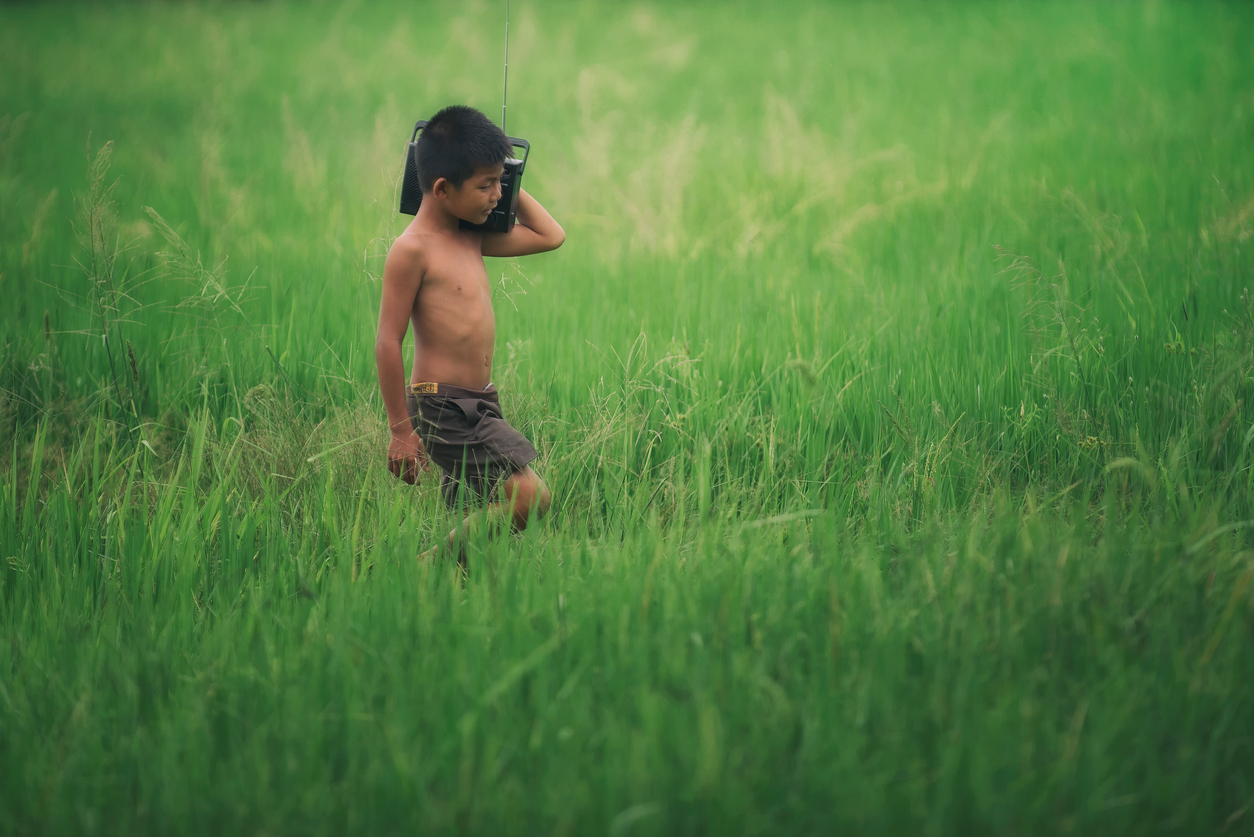 Hypnotized by cricket commentary on their transistor radios, pedestrians walked into trees, cyclists wobbled into the way of cars and schoolboys got used to Test Match Special’s commentators adjourning for lunch in England when it was teatime in India. We were taught time zones by the BBC.
(iStock)
Mukul Kesavan   |   Published 07.07.19, 03:24 AM

Commentary was the first long English word learnt by middle class Indian children of my generation. It was an odd word for us to know: it had a middle-aged, abstract, lofty sound to it. But we knew it because it brought the cricket to us. ‘This is All India Radio. We now take you over to Calcutta, for running commentary on the first day’s play of the third cricket test between England and India, being played at the Eden Gardens. Over to Calcutta.’

Commentary transported us. Over to Calcutta... there’d be a second’s amplified silence and then the radio’s speakers would warm into life with the muted gabble of eighty thousand people crammed into the stadium, supplying a soundscape for Pearson Surita’s plummy welcome or Anant Setalvad’s lucid sentences. It wasn’t called radio commentary then because there was no other sort; television hadn’t arrived yet and even after it did, it was a decade before live telecasts began.

Radio commentators had a simple brief: they were meant to provide ‘a ball-by-ball description’ of the action in the middle. It was as if sighted people were describing the world’s goings on to the blind. It was the first and only time in our lives that we outsourced our senses to remote strangers for the better part of the day. Hypnotized by transistor radios, pedestrians walked into trees, cyclists wobbled into the way of cars and schoolboys got used to Test Match Special’s commentators adjourning for lunch in England when it was teatime in India. We were taught time zones by the BBC.

With the coming of televised cricket, radio commentary in India died. Not literally; you still have radio commentary on A.I.R. but you know that the commentators aren’t at the ground for the overseas matches. They’re in a studio watching the game on television with the sound turned off. The description of doings on a digital screen doesn’t, to analogue ancients like me, qualify as ‘live’.

So when I want cricket to be a bird in my ear while I do other things like drive, I have to listen to television commentary on my phone. In less regulated days, I could have tuned in to Test Match Special on the BBC; the broadcast still exists but rights restrictions bar desis from accessing it. In England, TMS is more indispensable than ever before in keeping international cricket and its English audience connected because the BBC no longer owns telecast rights which means that the telecast is no longer free to air. Viewers have to pay Sky for the privilege of watching cricket with the result that very few do. Which means that Jonathan Agnew and his cake-eating crew are the only way in which the majority of Brits can follow the World Cup without paying toll.

Listening to Test Match Special over a brief holiday in London, I was both reassured and startled by how little it had changed in its idiom and format over half a century. The division between the professional broadcasters and the expert summarizers still existed, as it had in the past. Then, Brian Johnston, John Arlott and Christopher Martin-Jenkins did the description and Trevor Bailey and Fred Truman provided the expert commentary; now Jonathan Agnew, Charles Dagnall, Isa Guha do the commentating while Phil Tufnell, Vic Marks and others editorialize.

The presence of women commentating is the best thing that’s happened to TMS because it helps relieve the male clubbiness that suffuses it like a haze. TMS makes broadcast cricket sound like old, very knowledgeable friends chatting to you about the game, so its churlish to complain, but listening to ‘Aggers’ banter with ‘Daggers’, I realized why cricket’s audience in England, outside of people of South Asian origin, consists mainly of posh, white, older people. Agnew recently expressed misgivings about Jofra Archer playing for England because he felt that the fast-tracking of a cricketer who had till recently played his cricket in Barbados would hurt team morale. When Jonathan Liew, a cricket writer of Chinese descent, pointed out that Agnew had expressed no such misgivings when Gary Ballance, a white cricketer of Zimbabwean origin, had been included in the team, ‘Aggers’ became abusive on social media in response to what he felt was an imputation of racism. He subsequently apologized to Liew and continues to anchor the BBC’s cricket commentary but you do get the feeling that TMS needs a demotic makeover if it (and cricket) is to survive in 21st-century Britain.

Meanwhile in India, the profile of commentators has never been higher with one of them, Sanjay Manjrekar, trending on social media and making newspaper headlines for his opinions. Manjrekar had said that in the context of ODI cricket, Ravindra Jadeja was, in his opinion, a “bits-and-pieces” player. By this, Manjrekar meant a player who wasn’t a genuine all-rounder — not someone who would make it to the team on the strength of his specialist skills as a batsman or a bowler. Jadeja took exception to this description and tweeted a response that disparaged Manjrekar’s record as an international cricketer and compared it unfavourably with his own.

This, in turn, led to an avalanche of social media abuse for Manjrekar who, to his credit, seemed unmoved by it. But the incident raised an important question about commentary: should commentators confine themselves to accurate and animated descriptions of the game or should they also editorialize about the players in the middle? I think they should do both; commentary would be (and indeed often is) deadly dull when commentators just drone on about bowlers running in to bowl. Besides, television commentators don’t have to conjure up the action in the way radio commentators do, so insight, opinion and judgment become inescapable.

Also, given how tightly the BCCI tries to control Indian commentators, by writing into their contracts clauses that prohibit them from criticizing selection decisions and so on, we should applaud any Indian commentator who is independent enough to speak his mind as Manjrekar did. It’s worth pointing out that Manjrekar was careful to confine his description of Jadeja as a bits-and-pieces player to his ODI avatar. In the contest of Test cricket, Manjrekar saw Jadeja as a specialist bowler. Jadeja’s pushback is of a piece with the thin-skinned entitlement of this generation of cricketers who see journalistic criticism as impertinence. Not so long ago, M.S. Dhoni joined Amitabh Bachchan in implicitly criticizing Harsha Bhogle for being an insufficiently patriotic commentator.

That said, as a listener, I can see why Manjrekar’s brand of opinionated commentary can be annoying. It’s annoying because television commentary doesn’t observe TMS’s distinction between commentator and expert rigorously. Manjrekar wears two hats: the ball by ball commentator and the expert former cricketer who uses experience of the game at the highest level to weigh up performances and players and make judgments. It is a tightrope, but it can be walked, as Nasser Hussain shows each time he does his stint. Hussain can be blunt to the point of tactlessness, but it doesn’t come out sounding personal. With Manjrekar the problem is his manner rather than the content of his commentary. He lacks Hussain’s matter-of-factness. His elocutionary manner makes his judgements sound like indictments and suggests malice when none is intended.

Controversies like this one make me miss the comfortable anonymity of old-style radio commentary where faceless but familiar voices described a beloved set piece over and over again, unconcerned with ratings and uninterrupted by commercials. It’s a silly nostalgia given how good television has become at showing us the action, but its coverage would be even better if its commentators were heard, not seen.