Covid healthcare: Find the source of the pain

HINTERLAND | As the pandemic enters smaller towns and the countryside, the fatally serious battle is now left to the infected individuals’ fate 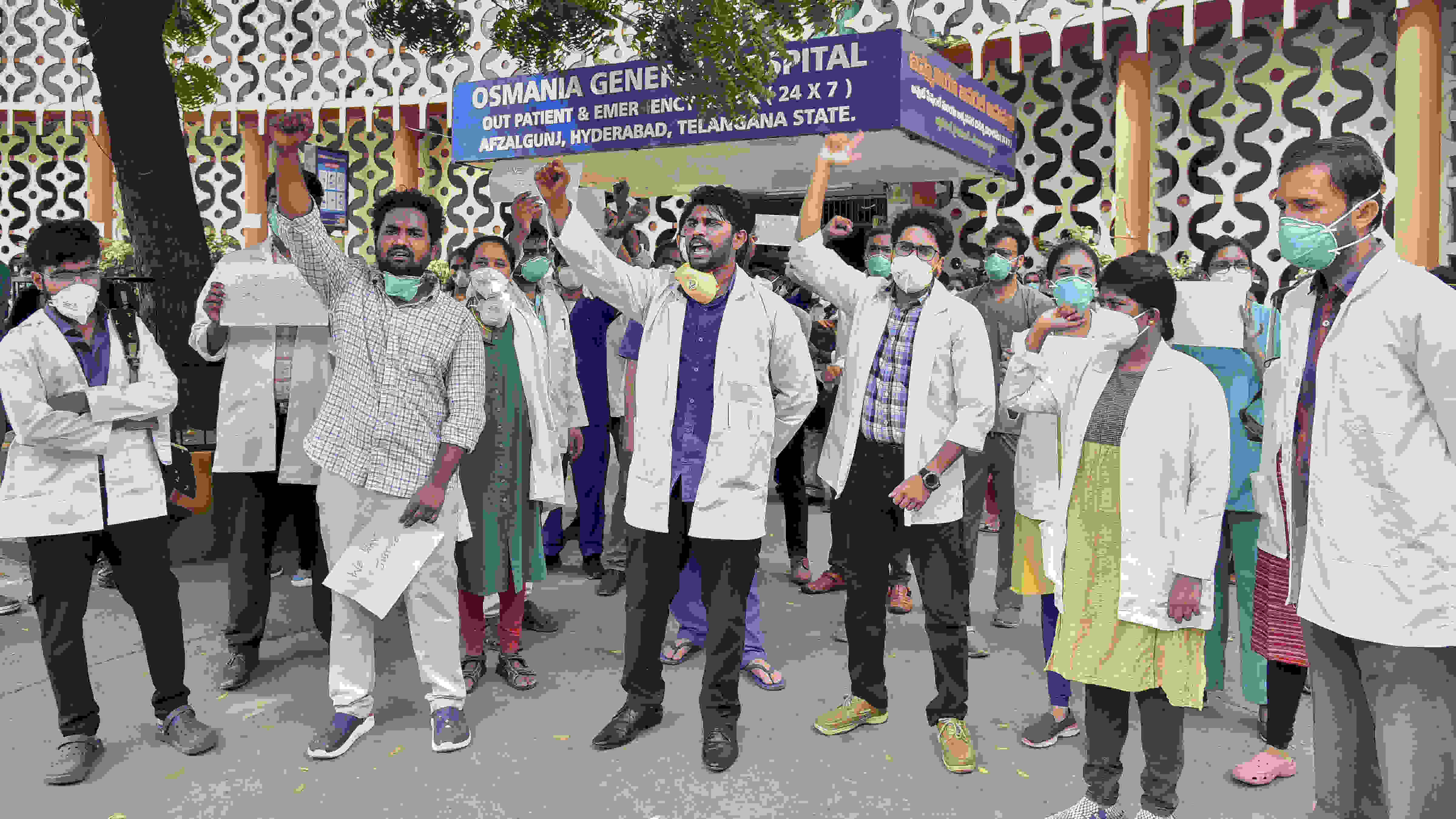 Members of the Junior Doctors Association stage a protest over various issues including proper medical infrastructure, in front of out patient and emergency block at Osmania General Hospital, in Hyderabad, Wednesday, Sept. 9, 2020.
PTI
Jaideep Hardikar   |     |   Published 15.09.20, 01:35 AM

Last week, the Nagpur Municipal Corporation invited paramedics and doctors to join its Covid care centres. Offer: a short-term contract with good remuneration. Nagpur is not the only district desperately seeking new doctors and paramedics amidst a surging Covid-19 graph; several districts are floating such ads almost daily: doctors and nurses needed. The response, however, seems to be cold. Existing doctors, on the other hand, are breaking. No one wants to go and work in far flung areas, whatever the remuneration. Life isn’t rosy there.

Take this: In Yavatmal, western Vidarbha, a private doctor whose hospital is a Covid-centre, shot off a terse letter to the district collector. Relieve me, he wrote, from the pandemic duty, given that his hospital was running thin on financial resources, supporting doctors and paramedics.

In Madhya Pradesh, healthcare has collapsed like it has in many other states. Patients from that state are ending up in the hospitals in Nagpur, which are already out of beds, doctors, paramedics. In Bihar, the local medical association in August said that doctors there were dying of Covid-19 at nine times the national average. Nitish Kumar would have us believe how things have been better under the BJP’s and his watch, but if it can’t save the doctors, the less we speak about the masses the better.

As the pandemic enters smaller towns and the countryside, the fatally serious battle is now left to the infected individuals’ fate. The shattered economy and public healthcare system are intertwined into one big mess. If you are infected and have serious symptoms, you’ll be lucky to find yourself a bed in the crowded hospitals in small towns. Count days until your infection abates. If you die, you die. This piece is not about jobs. But you’ll be lucky to find one other than in healthcare with high risks. Where you have beds, doctors are in dearth.

India’s Covid-focus must shift to small towns, where the infection is fast multiplying. Here on, we have got to put more money in public health and medical education to produce a large number of doctors and nurses. India’s health profile has altered to non-communicable diseases, but we get ripped apart by infectious diseases. The pandemic has bared our crushing shortage of healthcare providers.

A World Health Organization study in 2016 said that the lack of a trained workforce was a major constraint when it comes to achieving health delivery in a short period. We have 80 doctors and 61 nurses per one lakh people, their density in urban areas four times higher than in rural places. Moreover, many individuals claiming to be doctors are unqualified quacks.

The study found huge variations in doctor-nurse density across states. For instance, in Chandigarh doctors were 10 times the number in Meghalaya; or in Punjab, an upper income state, 2.6 times higher than in Bihar, one of the poorest states. Half the lowest 30 districts ranked by doctor-density were in the Northeast and the remainder in central states like Uttar Pradesh, Bihar and Madhya Pradesh. Of the top 30 districts, 18 were state capitals or the national capital (seven in Delhi alone). Seven of the top 30 districts with a high density of trained doctors and nurses were in Kerala. So, the country’s healthcare story is pretty much in 20-30 districts.

To reach the Chinese level of doctor density, India needs over 7,00,000 doctors; we produce 30,000 a year. In China, many doctors hold three-year medical diplomas, a possibility opposed strongly by the qualified doctors here. But, to set our healthcare delivery in order and make it equitable, we can’t prolong a radical departure from the past. New viruses — not the peacocks — are at our doorstep.