Coronavirus to the rescue

The pandemic has helped India's diplomats recast Modi's image, which had taken a beating globally, in favourable light 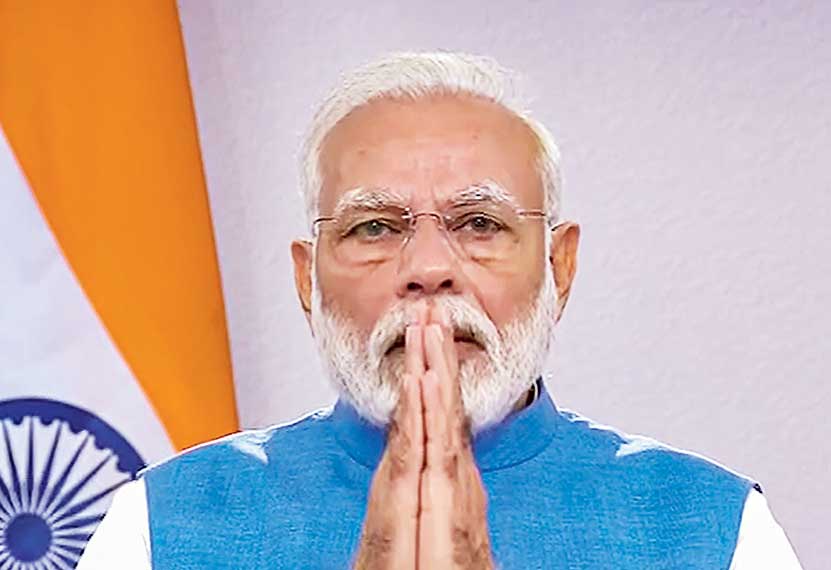 With more than 380,000 people infected across 177 countries, the coronavirus pandemic has demonstrated its global reach. No field of life — from work and travel, to watching a film at a theatre or planning a holiday — has remained untouched. And the impact, for the most part, on the economy, jobs and our very choices and movement has been negative. There’s an exception though.

At least in the short run, Indian diplomacy can thank the global scare over the coronavirus.

The crisis has allowed the country's diplomats to shine and demonstrate one of their strongest suits, while enabling them to escape from a series of uncomfortable — even unpleasant — conversations and meetings that were the outcome of decisions they had no direct role in. In fact, the pandemic has helped them try to recast Narendra Modi’s image, which has taken a beating globally, in a favourable light.

The prime minister had two major foreign trips scheduled for March — the first, to Bangladesh, to commemorate the birth centenary of that country’s founding father, Sheikh Mujibur Rahman; the second, to Brussels, for the annual India-European Union summit. Both visits were cancelled, and — while sceptics have cast aspersions on the reasoning — the rationale in each case was the desire by the host countries to minimize interaction during the coronavirus crisis.

Now, we know Modi likes to travel — he made more foreign visits (94) in his first five-year term than his predecessor, Manmohan Singh, did (93) over his decade in office. But the March cancellations saved him, his diplomatic team, and his hosts from embarrassment. In both cases, the bone of contention was the Citizenship (Amendment) Act that grants preferential naturalized citizenship rights to all major religions other than Islam.

In Bangladesh, students, political parties and civil society groups held large public protests earlier this month demanding that the government of Sheikh Hasina Wajed withdraw its invitation to Modi. They also made it clear that they would continue the protests in the lead up to Modi’s planned visit and during his stay in Dhaka. Their actions are a reflection of an accusation the Modi government has effectively hurled at one of India’s closest friends, Bangladesh, through the citizenship law: that minorities there are so unsafe that they need New Delhi’s sheltering hand. Over the past decade, India’s relations with most neighbours have grown more complicated. In some cases, they have declined sharply. Bangladesh has been an exception, a singular success story under Wajed. With the citizenship law, the Modi government might have shot itself in the foot. Protests during his visit would have made the extent of hurt in Bangladesh public.

The EU, on the other hand, has always viewed relations with India through a colder, and more reasoned, lens. Like the United States of America, the Europeans see India as a potential democratic and secular bulwark against China’s growing influence. But after the CAA was passed, more than 500 of the European Parliament’s 751 members prepared a joint resolution describing the law as “fundamentally discriminatory in nature”. Led by the foreign minister, S. Jaishankar, the Indian government managed to convince European legislators to put off the resolution until Modi’s Brussels visit, arguing that this would give them a chance to hear New Delhi’s perspective from the prime minister. But that scheduled conversation between Modi and the Europeans in Brussels was threatening to escalate into a thorny interrogation after the recent Delhi riots that killed more than 50 people. That scenario has been avoided for now.

Instead, the pandemic has allowed Indian diplomats to try and craft a new narrative around Modi: that of a decisive globalist. Recently, Modi convened a virtual meeting of South Asian leaders to devise a common strategy against the virus. He also pitched a similar virtual meeting of G20 leaders to the Saudi Arabian crown prince, Mohammad bin Salman — Riyadh is the chair of the grouping for 2020.

Equally, the crisis has also helped the foreign office shine a light on one of its great strengths: dealing with overseas humanitarian crises. From the Gulf War of 1991 to the Arab Spring in Libya in 2011, and the more recent conflicts in Yemen and Iraq, India’s diplomatic corps has been steeled by numerous rescue operations. On this occasion, too, it successfully plucked out hundreds of Indians stuck in Wuhan, ground zero of the coronavirus spread, and followed that up by helping Indians in Iran — one of the worst-affected nations — return home. The crisis gave them an opportunity to demonstrate a muscle that has delivered every single time, without fail.

To be sure, the reprieve is temporary. Over the past few months, India’s diplomats have been forced onto the defensive globally by their government’s actions — from the overnight revocation of Kashmir’s special status and the clampdown there to the CAA and the proposed National Register of Citizens. Those international concerns remain and will re-emerge as diplomatic irritants. In Bangladesh, Wajed’s government has protested the law. And it’s unclear whether European parliamentarians will wait much longer before pushing through the resolution critical of India.

But for now, everyone has one primary focus: battling the spread of the coronavirus. By demonstrating leadership in that fight, the Modi government can regain some of its lost sheen globally. India’s CAA-scarred diplomats deserve that.