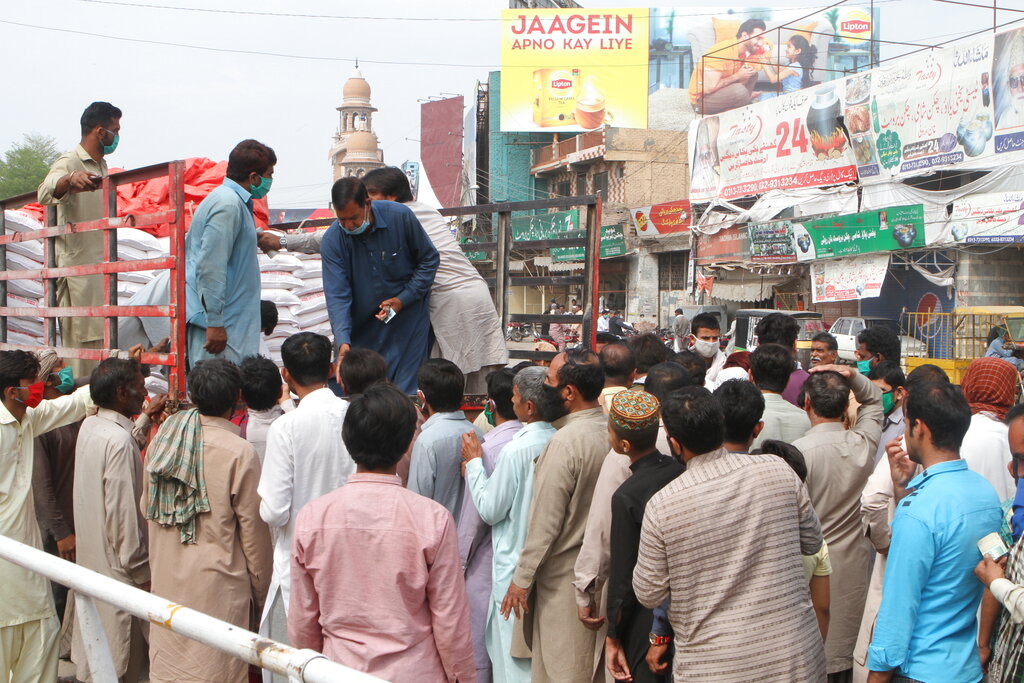 Volunteers distribute food supplies to people stranded in their homes due to the lockdown to contain the outbreak of the coronavirus, in Multan, Pakistan, Monday, March 30, 2020.
(AP Photo/Asim Tanveer)
Mehmal Sarfraz   |     |   Published 30.03.20, 06:49 PM

When the coronavirus pandemic ends, the world as we know it will change in ways that we cannot predict right now. There are some hard truths that we would most likely witness, including the fact that countless lives would be lost in the process and some governments that failed to rise to the occasion would be ousted. A global recession seems to be in the offing. World economies have seen a pushback. Some ask if this is nature telling the human race to pause, to take a break, to rethink our future. We will only know if we are fortunate enough to survive this.

The world is coming to grips with the following facts: tourist spots are empty; international flights are mostly suspended; most shops are closed; places of worship have been temporarily shut down; healthcare facilities seem inadequate in the face of the coronavirus pandemic; and we are relatively clueless.

The tragedy that is unfolding right before our eyes should make us reflect. Do we really need to spend so much money on wars and weapons? Why hasn’t healthcare been a priority in this world full of greed? The gap between the rich and the poor has never been so obvious — look at the lockdowns around us. The poorest of the poor are scared. They have nowhere to turn to. Those of us who are privileged enough to self-isolate at our homes will not be able to understand what those who scamper to make ends meet even under normal circumstances are going through right now. We can only hope that our governments can provide food to them in these difficult times. People should also donate to the needy as much as they can afford to. These people are the most vulnerable on account of their living conditions. They need help now more than ever.

Unfortunately, there is no option other than a lockdown unless you test aggressively like South Korea did. Lockdown and/or testing aggressively are the only options that countries have until there is a cure for the coronavirus. Countries that were late in enforcing lockdowns have been hit quite hard.

In Pakistan, the number of coronavirus cases is rising with each passing day. There were almost 1,500 cases on Saturday night. Twelve people have died so far. We have not tested aggressively as of now. Pakistan is under a partial lockdown. Sindh province has been the most vigilant in testing suspected patients, tracking down those with a travel history, providing timely care and establishing proper quarantine centres. The Sindh chief minister, Murad Ali Shah, and his team have been at the forefront. Sindh was also the first province in Pakistan to go for an official lockdown for two weeks. Other provinces and areas followed suit a day later. The Sindh government is led by the Pakistan Peoples Party. Punjab and Khyber Pakhtunkhwa have Pakistan Tehreek-e-Insaf governments while Balochistan is ruled by the PTI’s ally, the Balochistan Awami Party.

There is a caveat though. Prime Minister Imran Khan himself didn’t seem too eager on a lockdown. His concerns for the poor, daily wage earners and lower-income groups are genuine. There are no two ways about that, but his opinions on the lockdown have been quite confusing. Initially, he said a lockdown is a curfew, which it isn’t. On the day Sindh decided to announce a lockdown for two weeks, Khan addressed the nation, once again, and said that Pakistan cannot afford a lockdown, citing resources and capacity issues. The next day, other provinces announced lockdowns, although they were not using the word, ‘lockdown’ (A rose by any other name would, as Shakespeare wrote, smell as sweet).

Then there is the issue of ‘politics’. In his first address to the nation on March 17, Khan didn’t mention the commendable efforts by the Sindh government. On the other hand, the press conference on the coronavirus by the PPP chairman, Bilawal Bhutto-Zardari, two days later was not just informative but also quite mature. He refused to criticize the federal government or Khan. “It’s not the time to criticise the prime minister and I would not blame him or anyone. Instead, I should hope that he and every single citizen of Pakistan can win this fight. There is a need for increased coordination and unity,” said Bhutto-Zardari.

The leader of the Opposition, Shehbaz Sharif, also returned from London after four months by taking the last international flight from London to Pakistan. He offered to help the government. Bhutto-Zardari called an all parties to discuss the corona situation via video link. Then the Speaker of the National Assembly of Pakistan hosted a consultative meeting of parliamentary leaders via video link. Khan addressed the parliamentary leaders and then left. Both Shehbaz Sharif and Bhutto-Zardari left in protest because they said it shows that the prime minister was not serious about building a national consensus. Khan’s party says he had other scheduled meetings so he couldn’t stay on. Whatever the reasons, Khan should have at least listened to the suggestions of Opposition leaders. He was widely criticized for his behaviour by his opponents.

Then there was another episode exposing the government’s dilly-dallying. On Thursday, the federal minister for religious affairs announced that after consulting with religious scholars, the government has decided that mosques would not be shut down for Friday prayers but there would be a limit on the number of people. He didn’t give details of the limitations. A few hours later, the Sindh government issued a notification saying all mosques in Sindh will be closed for communal prayers and only three to five people, including the mosque staff/administration, would be allowed to congregate inside till April 5. The Balochistan government followed suit a little later. On Friday morning, the Punjab government issued the same instructions on mosques. The federal government and the Khyber Pakhtunkhwa governments didn’t, which led to further confusion.

In these testing times, building a national consensus is imperative. Coordination amongst all federating units is the key. We are all in it together. May we all remain safe and live to see a corona-free world.