Advertisement
Home / Opinion / Repeating the past

Politics and play: pandemics and prejudice 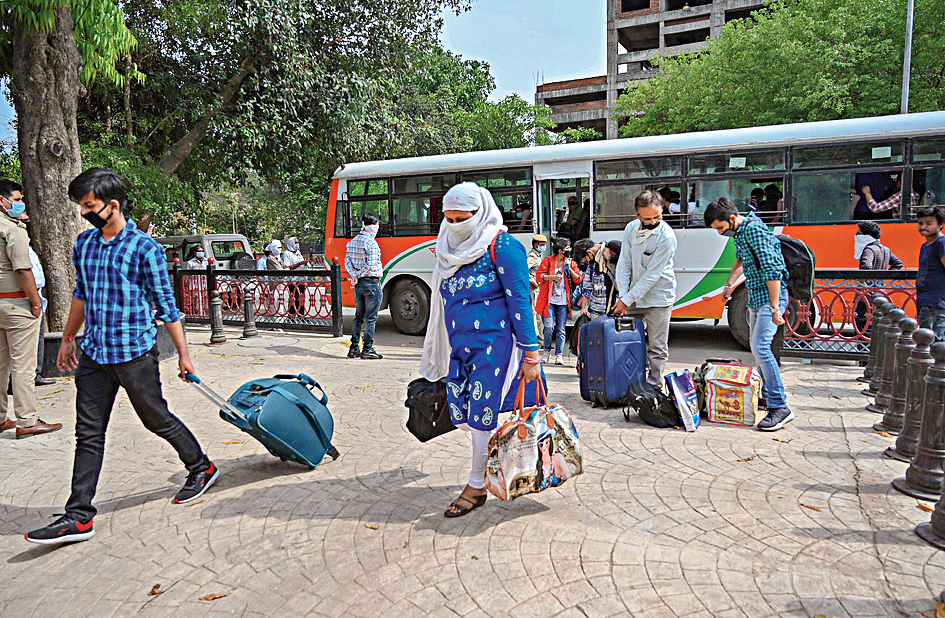 Stranded students from Kota step out a bus arranged by UP government as they arrive at their native place during a nationwide lockdown imposed as a preventive measure against the coronavirus, in Prayagraj, Monday, April 20, 2020.
PTI
Ramachandra Guha   |   Published 24.04.20, 08:07 PM

The ‘Black Death’ was an epidemic of bubonic plague that devastated large parts of Europe and Asia in the 14th century. It led to colossal human suffering, and the savage expression of human prejudice. In an essay published earlier this month in the Financial Times, the Columbia historian, Simon Schama, observed: “If scapegoating was always going to be a predictable response of plague-beleaguered powers, the inevitable target of blame was the Jews. At the time of the Black Death, they were accused in some places of poisoning wells; in others it was said that they had introduced the disease out of sheer malevolence towards Christians.”

Across medieval Europe, writes Schama, the pandemic led to attacks on Jews by Christians. But, as he further notes, attacks on vulnerable minorities have been a feature of pandemics through history. When cholera hit the East Coast of the United States of America in the 19th century, Americans who were Protestants and English by origin turned on Americans who were Irish and Catholic. A nativist movement arose that attacked “Irish migrants as a double threat to Protestant Anglo-America; as the carriers of both popery and disease”.

Schama’s essay provides a broad sweep of the history of epidemics in Europe and America. Let me now turn to two focused studies on epidemics in modern India. In 2004, the historian, Prashant Kidambi, published an essay in the journal, Urban History, on the impact of the plague of 1896 on the city of Bombay. The colonial State’s anti-plague policies, he found, had a pronounced class bias, “which predominantly took the form of an assault both on the neighbourhoods as well as the bodies of the urban poor”. The British and Indian elite were convinced that it was the slum dwellers of the city that were the main carriers of the disease. There was a veritable assault on poorer localities, with hundreds of huts being set on fire or razed to the ground. Tens of thousands of Mumbaikars were rendered destitute as a result.

Last year, the historian, David Arnold, published an essay in the Transactions of the Royal Historical Society on the 1918 influenza epidemic in India, which claimed more than 12 million lives in the subcontinent. The poor suffered disproportionately from the pandemic. Arnold quotes the sanitary commissioner of the Central Provinces as writing: “The ravages of the disease were seen at their worst in the villages, where the complete helplessness of the people combined with scarcity of food and clothing produced a calamity which baffles description.” Meanwhile, the sanitary commissioner of Punjab observed that “the people who suffer most are the poor and the rural classes, whose housing conditions, medical attendance, food and clothing are in defect”.

The outbreak of Covid-19 in India brings to mind both the Black Death in 14th-century Europe and epidemics at the time of the British raj. Religious minorities have been targeted; while the working classes, already leading a fragile existence on the margins, have experienced enormous suffering. Must it have been so? Unlike medieval Europe, whose states were fanatically devoted to Christian supremacy, India is in theory a secular state. Unlike the British raj, which was authoritarian to the core, independent India is a democratic republic, whose elected leaders are in theory accountable to their voters, the poor and vulnerable among them.

The class bias of the government of India in the wake of Covid-19 has been strikingly manifest in the prime minister’s own public statements. A lockdown was necessary, but surely it could have been better planned? In South Africa, whose economy depends, like India’s, on migrant workers in cities, these migrants were given a full three days to return to their homes. Why couldn’t the same have been done in India? Had it been done, there would have been little difficulty in using the existing train and bus network to get citizens back to where they wished to be before the lockdown took effect.

The urban middle class have their own safety net, independent of the state; investments, savings, incomes, pensions, and homes. These assets help them come through unexpected crises caused by events beyond their control. The millions of working-class migrants in cities have no such safety net. Which is why, if abruptly rendered jobless, they would rather return to their villages, where they can eke a living off the land and avail of the support structure of their families. The prime minister’s repeated references to balconies made it clear that it was the middle class and their safety which was uppermost in his mind. This was a shocking lapse. Indeed, the images of tens of thousands of Indians being brutalized by the police as they sought to walk to their distant villages will remain the enduring visual memory of Covid-19.

In a further sign of the class bias of the State, after the lockdown came into effect, luxury buses have been arranged for Gujarati pilgrims to take them back to their home state from distant Uttarakhand. Other buses, albeit slightly less well appointed, have been arranged to take middle-class students from the coaching capital of India, Kota, back to their native state of Uttar Pradesh. Yet, despite desperate pleas from already overburdened state governments, the Centre has still not arranged for trains to take destitute workers in cities back to their home districts.

The majoritarian bias of Indian society, meanwhile, has been expressed in many ways. The meeting of the Tablighi Jamaat in the Markaz in Nizamuddin was an act of egregious irresponsibility. Those who allowed and encouraged this meeting must be brought to book. Yet, instead of holding the guilty accountable, the episode has become an excuse for the wide-ranging demonization of Indian Muslims. The language of innuendo and abuse used by members of the ruling party (among them a senior MP and several MLAs from my own state, Karnataka) has been shamefully amplified by a slew of television channels, who have run programme after programme that have been blatantly communal in content. Even Central government spokespersons were resorting to religious profiling in their daily briefings. An advisory not to do so was belatedly issued, but by then the damage had been done. Reports are coming in from all across India of Muslim vendors, labourers and artisans being boycotted merely because of their faith.

The prime minister’s response to this alarming spread of anti-Muslim bigotry has been characteristic. On the one hand, by his silences and evasions he has contributed directly to its spread. However, after some tough tweets from officials of the oil-producing countries of the Middle East, the prime minister issued an anodyne tweet to the effect that this disease recognized no race or religion. By this time the communal virus had already infected tens of thousands of people in cities and villages all over the country.

The coronavirus pandemic is in some respects akin to a natural disaster such as an earthquake or a cyclone. It came all of a sudden, leaving both state and society unprepared. But once it had arrived, and its magnitude was understood, our response should have been wiser and more humane. Instead, our professedly democratic government has been as callous towards the poor as the authoritarian British raj, while our allegedly modern society has displayed the sort of venomous hatred towards religious minorities once characteristic of medieval Europe.