Households, businesses and the government are famished 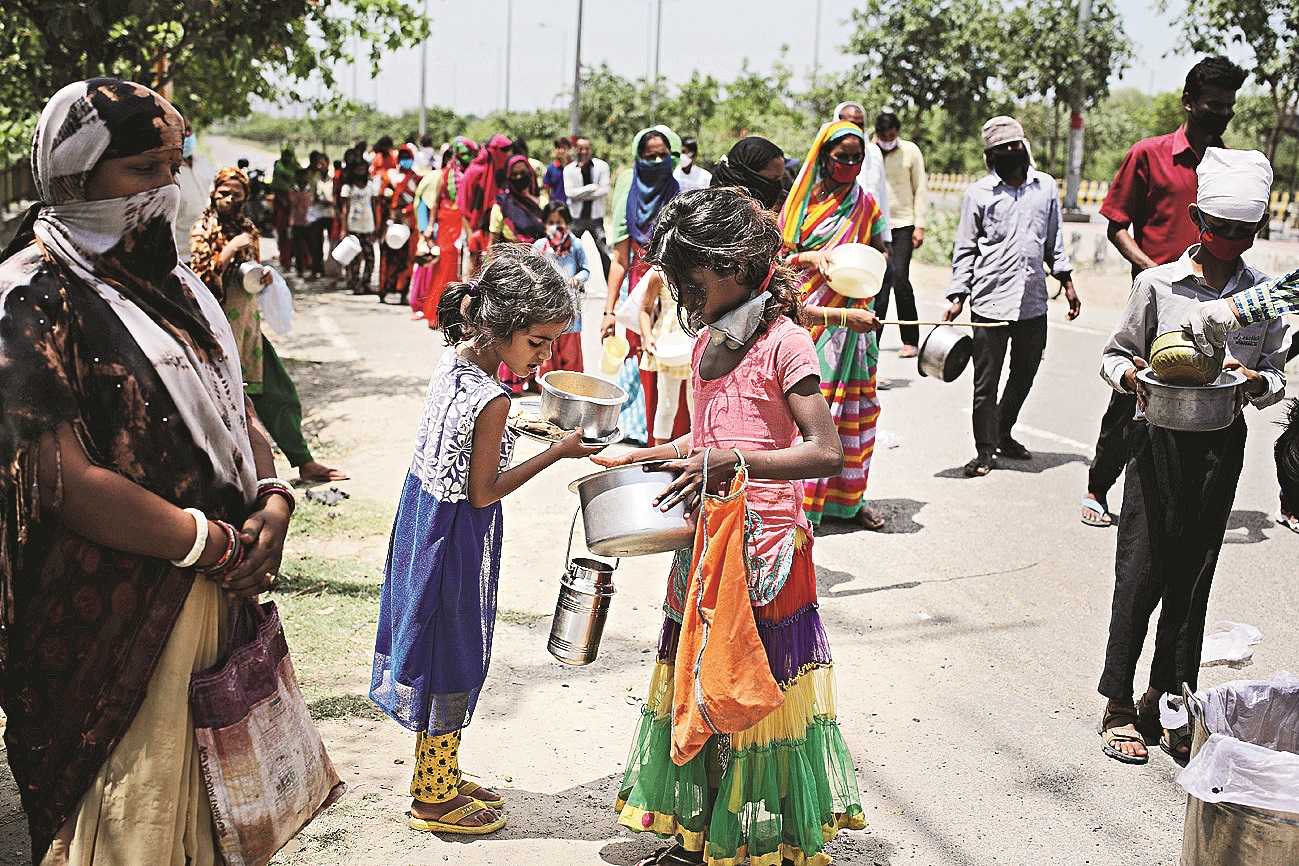 Two young girls look at the food they received from local authorities during a distribution drive for people left jobless due to continuous lockdown, in Noida, May 4, 2020.
(AP Photo/Altaf Qadri)
Renu Kohli   |   Published 18.05.20, 07:47 PM

For India, the Covid-19 pandemic has brought about general starvation. This can be seen all around. From households to businesses and the government, each is famished. Households in large numbers are starved of jobs, occupation and even food. Firms are credit-starved across the board and the government is resource-starved and short of revenue. These deficits in every segment of the economy are not independent of each other. They are interconnected through the lockdowns imposed for epidemic containment. If households are starved of jobs and earnings, it is because of the sudden stop in production of goods and services, pulling down businesses in turn and eroding revenues of the government that was resource-starved to start with. With the pandemic still raging and likely to endure for long without a vaccine or therapeutic innovation, what will sink the economy?

Consider the features that have surfaced in less than two months of Covid-19 and related shutdowns that were nationwide until recently.

Numerous surveys, reports and visuals of displaced workers drive home the extreme need of employment, incomes and food among individuals and households. According to a survey by the private agency, the Centre for Monitoring Indian Economy, nearly one out of four employed persons lost their jobs in March-April. The aggregate unemployment rate was 23.5 per cent in April, a full lockdown month; in May first week, this rose to 27.1 per cent. Unemployment levels are almost 50 per cent in some states. The number of households facing income losses was 84 per cent in about five weeks of the most stringent lockdown in the world. Similar findings are reported by the Azim Premji University phone survey, which reveals about 67 per cent of workers lost their jobs; the fall is 80 per cent in urban India and 60 per cent in rural India.

The fallout is starvation of another kind — the hunger for food. This runs across the extreme lack of food at one end, observed in the distressful sights and reports of millions walking to distant homes across the country. Some of them are dying of hunger, thirst, sheer exhaustion and accidents. An astounding number of them are in various camps according to the finance minister in her press conference last week in which free food — 5 kilogrammes of grains per person and 1 kg chana per family for two months — worth Rs 35 billion was announced to redress this hunger. At a more moderate level, 80 per cent and 70 per cent of urban and rural households, respectively, have reduced consumption of food, shows the APU survey. Above one-third, or 34 per cent, of the CMIE-survey households reported difficulties in surviving beyond a week without income or food support.

Next, most firms are credit-starved. The main employment providers are unable to access funding support to tide over the brutal hit to their production and sales due to the shutdowns. Few have the balance-sheet strength to withstand prolonged cash flow pressures of this kind. Rating downgrades of the weakened firms have raised funding costs and made banks more fearful of extending loans than before. Those at the lower end — the micro, small and medium-sized enterprises — are especially famished of credit while their important financing counterpart, the non-banking financial companies, which faced a longstanding fund crunch, are now facing a famine. Not many firms can bear the financing capacity to retain workers, pay them for long, while those engaged in construction and employ the largest unskilled worker segment have mostly let off these daily earners.

At the apex, the government is starved of revenues. Already in the red pre-Covid-19 due to two successive years of shortfall, the sudden shutdown of production and export-import and sales of all but essential goods and services has bitten it very hard. Nearly a quarter’s duration of closed production and sales means an all-round starvation of indirect, corporate and income taxes. The revenue famine also extends to non-tax sources, such as divestments, public asset sales, dividends, spectrum and licences fees and so on; collapsed asset values have upset the budgeted calculations of expected sales, including stakes. The starvation will remain upon unlocking too because economic activities would be depressed — the economy is unlikely to restore to pre-Covid-19 operations or function at full capacity. Safety concerns will lead to voluntary restraints in consumption of many goods and services and impact production capacities that will also bear the brunt of keeping public health and social distancing norms. Services such as hospitality, recreation, shopping malls and other discretionary personal ones are likely to witness severe decline in demand.

The revenue starvation has also led to perverse or procyclical reactions. Both the Centre and the state governments have increased fuel taxes and duties, the former twice in as many months since the pandemic’s advent. The Central government also froze dearness allowance increases and payments of serving and retired employees until June 2021; several state governments too have cut salaries and are likely to freeze dearness allowances to overcome the revenue starvation. Most state governments rushed to increase taxes on liquor the moment bans were lifted. The tax axe is rumoured to fall next upon the other sin good — tobacco. Apprehensions of higher indirect taxes, or the goods and services tax, have set in; so have fears of higher taxation of wealthier individuals.

The resource starvation has held back the government’s fiscal relief towards income support for the affected households, reducing it to a bare minimum. Although a Rs 20 trillion crisis package was given, with different components unveiled by the finance minister over five successive days, it majorly focused on long-term reforms (agriculture, coal, minerals, civil aviation, power distribution, defence, space and atomic energy sectors), liberalization (opening foreign direct investments in defence), privatization, reform of public sector enterprises, amongst other initiatives. Most of the support to individuals and firms consists of loans (housing) and the drawdown of own savings. The MSMEs have been given extended refinancing and credit lines, backstopped by partial sovereign guarantees; the NBFCs got full sovereign guarantee for bank purchase of the low-graded debt. Earlier, the Reserve Bank of India provided liquidity support to corporate, followed by a special line for the NBFCs.

However, the fiscal response to the immediate starvation or the crisis of the income and job-starved households has been meagre and lagging. The post-lockdown, March 26 fiscal relief for the vulnerable was just 0.8 per cent of the GDP — a mix of free food, cooking gas, increased MGNREGA wage rate and limited cash support to farmers, women and senior citizens. It has taken the revenue-starved government far too long to raise MGNREGA spending on May 17. While the additional Rs 400 billion should be helpful, given the scale of migration from cities to rural homes, the one trillion rupees overall in this fiscal year may be inadequate.

The starvation in a crisis judged as the world’s worst ever raises the question about what would submerge the Indian economy. Could this be the severe demand depression from extensive unemployment and business failures that couldn’t be suitably protected by a revenue-starved government, which remained a helpless bystander?