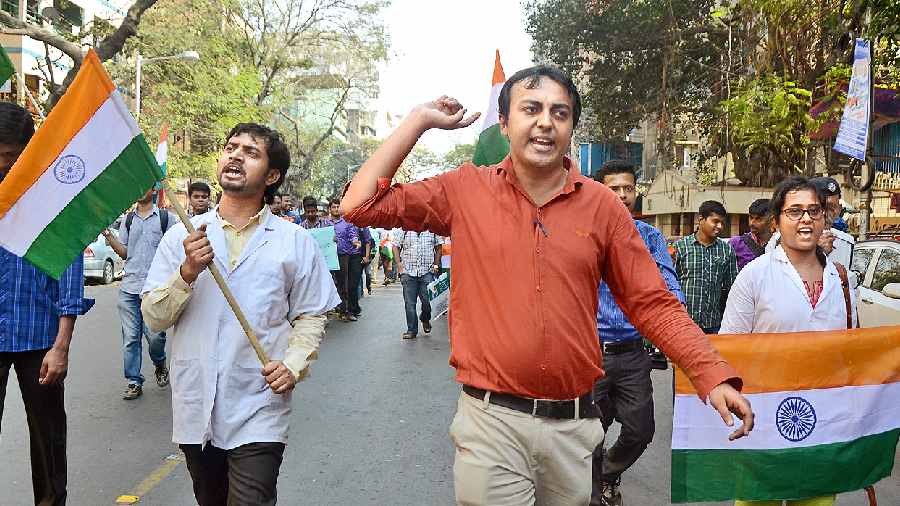 The recent debate on the doctrine of the basic structure of the Constitution seemed to celebrate an elusive idea of the people. There is an argument that the supremacy of Parliament is unquestionable because it represents the general will of the people. In a speech, the vice-president of India, Jagdeep Dhankhar, reiterated this argument in a profound manner. He said, “In democratic society, ‘the basic’ of any ‘basic structure’ has to be the supremacy of mandate of people. Thus, the primacy and sovereignty of Parliament and legislature is inviolable.” (https://vicepresidentofindia.nic.in/speechesinterviews/ address-shri-jagdeep-dhankhar-honourable-vice-president-chairman-rajya-sabha)

The role of the judiciary as the most authentic interpreter of the Constitution is also justified in the name of the people. Defending the doctrine of the basic structure of the Constitution, the Chief Justice of India, D.Y. Chandrachud, said that the “identity of the Indian Constitution has evolved through the interaction of Indian citizens with the Constitution and has been accompanied by judicial interpretation.” (https:// www.barandbench.com/news/basicstructure-doctrine-guides-judges-likenorth-star-says-cji-dy-chandrachud-after-vice-president-dhankhar-calls-doctrine-incorrect)

This overwhelming acceptability of the idea of the people actually relies on two powerful expressions of peoplehood in the Indian context: voters and petitioners. The regularity of free and fair elections and the active participation of citizens as voters in electoral politics are evoked as the people’s mandate. On the other hand, adherence to established legal-constitutional mechanisms to resolve conflicts is also seen as the people’s faith in the judicial system.

The people, in this schema, emerges as an abstract collective entity, which does not have any role to play in this socalled stand-off between Parliament and judiciary. This is the reason why serious discussions on the basic structure of the Constitution remain indifferent towards the everyday meanings of democracy, the perceptions of the people on political institutions, their anxieties and expectations. The question arises: can we think of a basic structure of Indian polity from the point of view of the ‘real people’ — the citizens?

Let us begin with the notion of the ‘basic structure’. Article 368 gives powers to Parliament to amend the Constitution. The scope of such amendments, however, has always been a contentious issue. According to one interpretation, the amending powers of Parliament are unrestricted and it can revise, amend, and even change any part of the Constitution.

There is also a counter-argument. It is claimed that there are certain key features of the Constitution, which determine its core identity. These features constitute what may be called the basic structure, which cannot be changed or altered by Parliament. Hence, ideals such as the supremacy of the Constitution, the rule of law, separation of powers, judicial review, secularism, federalism, freedom and dignity of the individual and the unity and the integrity of the nation are often invoked to offer meaningfulness to this legal interpretation. (https://www.barandbench.com/news/ basic-structure-doctrine-guides-judgeslike-north-star-says-cji-dy-chandrachudafter-vice-president-dhankhar-calls-doctrine-incorrect)

This line of argument is useful to evaluate those elements of our postcolonial public life that are cherished as fundamental political values. Precisely in this sense, three institutional features of the Indian political system — the supremacy of the Constitution, parliamentary form of government, and federalism — as well as two core principles — secularism and social justice — become more relevant from the point of view of competitive politics and people’s perceptions.

The acceptability of the Constitution is a well-known fact of our public life. This acceptability, however, should not be reduced to the success of electoral outcomes. The Constitution has a remarkable public presence. It has been recognised as a symbol of protests and human liberation. Deprived and marginalised communities evoke the Constitution to assert their dignity and rights. The transformation of the Constitution from a ‘rule book’ to a manifesto of emancipation certainly takes us beyond the highly rigid debate on the basic structure doctrine.

This is also true about the parliamentary form of government. CSDS-Lokniti surveys show that a vast majority of Indians strongly believe that they would like to be governed by elected representatives. Although there is an inclination for a decisive and impactful leader, the parliamentary form of democracy based on competitive elections is recognised as the most suitable form of government for the country.

Federalism is perhaps the most evident aspect of the basic outline of Indian politics. It is true that the Constitution gives more powers to the Union and that the states are relatively weak. However, the people do not find this institutional division of power problematic. The last few elections have shown that Indian voters believe in strategic voting. They vote differently in different elections. The success of regional parties in powerful states over the years and the simultaneous rise of the Bharatiya Janata Party as the dominant party at the national level underline the actualities of our federal system.

The public discussion on two core values — social justice and secularism — gives us an impression that these ideals have reached a saturation point and common people do not have any interest in them. This media-driven imagination is factually incorrect. It is true that the Mandal-style politics of social justice has certainly declined. However, the assertion that the State must facilitate an egalitarian social order is still a powerful political impulse in the country. The presence of strong Dalit and adivasi movements along with an impactful Indian feminist struggle influence the political discourse. No political party can ignore this comprehensive meaning of justice in its agenda, programmes, and policies.

The post-2014 career of secularism as a political ideal, however, is slightly different. The success of the BJP has forced all political parties to give up the concept of secularism. It is believed that secular politics is counterproductive and it will help the BJP consolidate its Hindutva constituency of voters. This assumption is absolutely incorrect. Various studies, including the Pew survey on religion in India, show that Indian communities still adhere to religious harmony and to the principle of sarva dharmasambhava — an expression of the Indian form of secularism.

This brief reassessment of some of the core principles that constitute the operative outline of Indian politics from the point of view of popular struggles is relevant to understand the limits of the contemporary debate on the basic structure doctrine. It shows that the real people assert themselves silently by adhering to certain unwritten ideals and values. These ideals are formed and practised outside the institutional realm of Parliament and judiciary. This is perhaps the most fundamental — basic — truth about our contemporary political life, which needs to be acknowledged seriously.