Religious places of worship and the limits of law 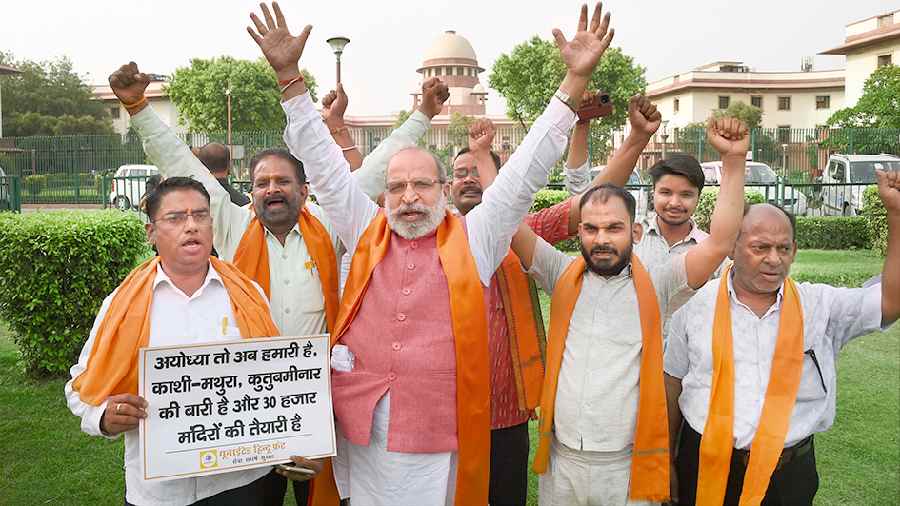 The discovery of the Babri Masjid dispute by the Hindutva groups in the late 1980s encouraged them to refashion their position on Indo-Islamic built heritage
File picture
Hilal Ahmed   |   Published 31.05.22, 02:56 AM

The Places of Worship (Special Provisions) Act 1991 has emerged as one of the most contested laws in recent weeks, especially after the Gyanvapi episode. On the one hand, there is a positive reading of this Act. It is argued that the 1991 law represents a national consensus regarding the existing religious character of all places of worship and their adequate legal protection. This reading relies heavily on Section 2 of this law, which says, “the religious character of a place of worship existing on the 15th day of August, 1947 shall continue to be the same as it existed on that day.”

There is also a negative reading of the Act. The Hindutva groups claim that the existing religious character of a few religious places of worship, especially mosques, affects Hindu sensibilities. According to them, many of these historical mosques were constructed after demolishing Hindu temples by medieval Muslim rulers; hence, there is a need to reopen these cases for the sake of historical accountability.

The positive reading of the 1991 Act is definitely convincing. It calls upon Indian citizens to create a mature, tolerant and egalitarian society by accepting the true meanings of the rule of law and constitutionalism. No rational mind would disagree with this honest resolve. However, this well-intentioned proposal will only work if it is capable of responding to complicated — even provocative — questions.

In this sense, the claims made by the Hindutva groups that medieval Muslim rulers desecrated Hindu temples and converted them into mosques cannot entirely be ruled out as a politically-motivated propaganda. After all, the desecration of religious places of worship was an acceptable political act in the medieval world.

Interestingly, these politically-charged questions are always kept aside to assert the supremacy of the 1991 Act. This law is presented as a self-sustaining, morally superior, and legally sound mechanism to counter all kinds of divisive and/or communal politics. This kind of legal reductionism, in my view, is politically counter-productive. There is a need to look at the political history that led to the enactment of the 1991 Act before making any sweeping generalisation.

The 1991 Act, we must remember, was the outcome of a particular political context. The discovery of the Babri Masjid dispute by the Hindutva groups in the late 1980s encouraged them to refashion their position on Indo-Islamic built heritage. The desecration of Hindu temples was accepted as a workable political framework to legitimise the history of Hindu victimhood.

The Muslim political-religious elite responded to Hindutva politics differently. They tried to expand the scope of their politics by evoking the debates on the religious characters of places of worship. This revisionist approach helped them to propose an intellectually refined and politically vibrant position on the Babri Masjid issue.

In December 1986, the All India Babri Masjid Conference was organised in Delhi. This Conference issued an overarching document — the Delhi Declaration. This was the very first articulated Muslim statement on the Babri Masjid issue. The Declaration formally recognised the Babri Masjid “… as a national heritage and as a historical monument but, above all, as a place of Islamic worship”. The opening of the mosque for Hindu worship was not only described as a setback for Muslims but also as a violation of Article 25 of the Constitution.

The Delhi Declaration also asserted two long-term objectives. First, it was demanded that all the historical mosques, protected by the Archaeological Survey of India and the state archaeological departments, should be opened for Muslims to offer namaz inside them. Second, it was insisted that “… [i]n the interest of inter-communal harmony, … a Central Law [should be enacted] to guarantee the status of a place of worship and protecting it as it existed on 15 August 1947, against any claims thereto or any move to alter it.”

The Muslim groups continued to highlight these demands in the period, 1987-1991. Even during the time of Statesponsored negotiations between the Vishwa Hindu Parishad and the Muslim groups (the Babri Masjid Movement Coordination Committee and the Babri Masjid Action Committee), the Central law to protect the existing character of religious places of worship was discussed and debated thoroughly.

The sangh parivar was not in favour of a comprehensive law of this kind. For the sangh parivar, the Ayodhya dispute was a point of reference for nurturing a new kind of temple politics. L.K. Advani’s rath yatra is a good example in this regard. The objective of the yatra was to create a clear political link between the Ayodhya dispute and other contested places of worship.

In this highly volatile political environment, the 1991 Act was introduced as a compromise to appease the radical Hindutva groups as well as the powerful Muslim elites. By exempting the Ayodhya dispute from the purview of this law, the State recognised the Hindutva claim that Ayodhya was a matter of Hindu faith. At the same time, the demand made by Muslim elites that the religious character of all places of worship must be legally defined and protected was duly acknowledged.

It is important here to clarify that the 1991 Act does not cover all religious places of worship. The mosques, temples and other religious sites protected by the ASI as dead historical monuments do not come under its purview. This provision is technically justifiable as there is a separate law, The Ancient Monuments and Archaeological Sites and Remains Act, 1958, for defining the religious character of historic sites.

However, this legal arrangement is politically complicated. The religious character of a historical monument is contingent upon the date of notification. If no religious activity took place on the very date when a particular historic building/site is taken up by the ASI, it would have to be protected as a dead/ secular monument. Although it is legally not possible to reopen such sites for any religious activities, the ASI has given permission for religious observance inside a few dead monuments in the recent past. In this sense, the 1991 Act opens up the possibilities for active politicisation of the ASI. This is clearly evident now.

The 1991 Act, like any other legal document, can only become meaningful if it is supported by a constructive, engaging and informed politics of inclusiveness. We must acknowledge the complexity of India’s past in its entirety, including those uncomfortable historical facts that do not fit in the established narratives of secularism. At the same time, there is a need to assert the crucial distinction between spirituality and communal divisiveness. Spirituality, Gandhi reminds us, gives us hope to create a mature society; the communal divisiveness, on the other hand, provokes us to take revenge.

The politics of revenge cannot provide protection to any religious places of worship even if it is protected by law.

Hilal Ahmed has made a film, Qutub: Ek Adhura Afsana, on the contemporary politics of heritage