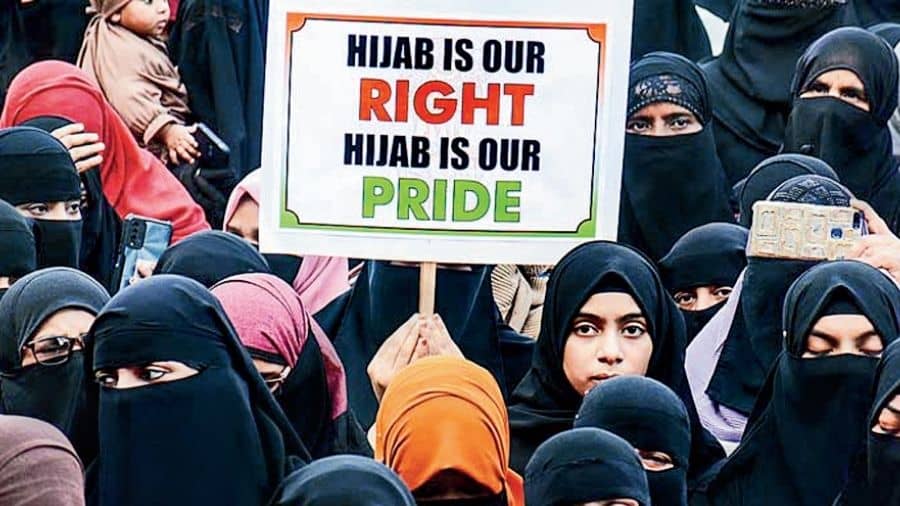 The unprecedented growth of an aggressive, anti-Muslim discourse in the aftermath of the election in Uttar Pradesh underlines an emerging form of Hindutva politics. The hijab row in Karnataka, provocative religious processions leading to communal clashes in different parts of North India, the alleged targeted demolition of Muslim houses and shops in the name of anti-encroachment drives, and the demand to ban the azaan and the namaz in public demonstrate the enthusiasm of Hindutva groups to assert their hegemony on public life.

This new form of Hindutva is based on two different conceptions. First, there is the old conflict of civilizations argument. An impression has been created that Hindus and Muslims represent two seemingly conflicting civilizations; hence, communal clashes are natural and inevitable. The metaphor of Muslim appeasement is often invoked to justify a violent Hindutva as an obvious and anticipated Hindu reaction.

Reliance on a very specific kind of secularism is the second, and perhaps the most influential, conception of a new Hindutva. Administrative biases and stereotypical beliefs about Muslims have always been an important aspect of communal politics in India. However, the active role of the State authorities in nurturing the Hindutva discourse is an entirely new phenomenon. The police administration, civic authorities, and even educational institutions are clearly taking a very defined bureaucratic position to facilitate what Hindutva groups describe as positive secularism.

Let us discuss the hijab row to understand the practicalities of these two conceptions of a new Hindutva in their entirety.

This controversy started in January 2022. Six hijab-wearing female Muslim students of a pre-university college in the town of Udupi in Karnataka were not allowed to attend classes on the ground that the wearing of the hijab is a violation of the uniform policy of the college. This denial of permission to the hijab led to a widespread debate across the state. The Hindu Right organizations also demanded that Hindu students should be allowed to wear saffron scarves.

In the meantime, the Karnataka government issued an order on February 5, 2022, clarifying the official stand of the State on this matter. Reiterating the official position that no exception could be made for Muslim girls wearing the hijab, the order instructed educational institutions to follow the strict policy on uniforms. A number of petitions were also filed in the Karnataka High Court, claiming that the wearing of the hijab is an essential Islamic religious practice that is protected by the Constitution itself. The high court issued an interim order in this case on February 10, 2022. Students were asked to wear the officially prescribed uniform without any religious attire. This interim order was implemented in a highly mechanical manner by the authorities. A few female students were forced to remove their hijabs outside the gates of many schools and junior colleges. Finally, the Karnataka High Court delivered its judgment on March 15, 2022. Upholding the restrictions on the hijab and other religious attires such as saffron scarves, the court categorically rejected the plea that wearing the hijab was an essential religious practice in Islam.

There are, at least, two important issues in this story that need to be given adequate attention. Young students sporting religious symbols in schools and colleges is not an unusual phenomenon. These symbols are not seen as a violation of any prescribed institutional dress-code. In many cases, these symbols are often applauded in schools and educational institutions to celebrate cultural diversity and inclusiveness. However, a very different interpretation is being offered in the case of the hijab. It is being defined as a problematic attire that has the potential to disturb socio-cultural harmony in a classroom setting. In a broader sense, the hijab is envisaged as a cultural threat to the defined contours of national identity in strictly Hindu terms.

The idea of secularism is the second important aspect. Senior leaders of the Bharatiya Janata Party (including the Union home minister, Amit Shah, and the Karnataka chief minister, Basavaraj Bommai), the college authorities, and even the high court seem to agree that religious attires of any kind, especially the hijab, should not be permitted in educational institutions to uphold the sanctity of secular education. Although the BJP leaders do not use the word secularism, they invoke the old secular arguments that religion is a matter of personal choice and it must not have any space in public life.

The government order issued on February 5 is a good example to elaborate this point. This order was actually the first legal move by the state government to provide validity to the hijab-ban. This order invoked the Karnataka Education Act 1983 to justify the powers of the government to endorse the uniform policy. Underlining the need to have social harmony and uniformity, it envisages the hijab as a threat to equality, unity, and public order.

It is important to note that the Karnataka Education Act 1983 does not have any direct provision for school uniform policy. Section 7 of this Act empowers the government to issue circulars with regard to curricula, syllabi, textbooks and other management-related issues. It also offers a long list of objectives  that includes the preservation of the rich heritage of our composite culture and the dignity of women.

The government order, however, reads this list of objectives rather mechanically, invoking the powers given to the state government under Section 133(2) of this Act to impose a rigid uniform law. The high court also justified this rigid official interpretation. The court found the exclusion of the hijab and/or any other apparel symbolic of religion as “a step forward in the direction of emancipation and... to the access to education”. This attitude is defined as positive secularism.

This notion of positive secularism stems from what I call Hindutva constitutionalism. Hindutva groups always make an important distinction between the principles of the Constitution and the legal technicalities and exceptions. The principles and high moral ideals enshrined in the Constitution are invoked as settled issues. On the hand, the legal technicalities are seen as unfinished business.

The attitude of the BJP leaders in the hijab debate underlines the practical manifestation of Hindutva constitutionalism. The government order ignored the principles on which the Karnataka Education Act 1983 is based. Instead, technicalities associated with school uniform policy were taken as points of departure to create an environment where the hijab would always be understood as a violation of law.

The discovery of the hijab as a potential political issue underlines the fact that Hindutva politics is deeply obsessed with the ‘clashes of civilization’ thesis. In fact, the success of new Hindutva lies in its enthusiastic search for those issues that might sustain Hindu-Muslim antagonism.

The hijab controversy also shows that the emerging form of Hindutva politics is not based on any intelligible set of ideological principles. There is certainly a reservoir of floating ideas — Indianization, Hindu pride, cultural nationalism, Rashtriya Suraksha, Swadeshi and so on — that have evolved over the years. These ideas, however, are never placed in any coherent structure. This openness and non-conformity allow Hindutva groups to take context-appropriate positions.

The search for coherence in Hindutva politics is meaningless. Instead, there is a need to pay close attention to the ways in which a set of claims are strategically organized to interpret the everydayness of social life as civilizational clashes between Hinduism and Islam.